In 2014, it was evident that the trend for shoppers to buy goods online was here to stay. U.S. e-commerce grew to 7.8% of retail sales, and Amazon, with more than $80 billion in annual fulfillment center revenue, had influenced buying habits for millions of households. At the time, Shopify (NYSE:SHOP), a software platform for creating and running online stores, was largely an unknown, but that's not the case today.

In order to understand where this Canadian upstart will be in five years, it's helpful to understand how far it's come in the last five.

With its incredible track record of growth in many of its key metrics, Shopify has moved into third place in domestic e-commerce market share behind Amazon and eBay. At the same time, the overall online trend has grown to 11.4% of retail sales in Q4 2018. Internationally, it's even bigger. Online purchases represented 12.2% of sales in 2018 and are expected to reach 22% by 2023, and Shopify is well positioned to capitalize. 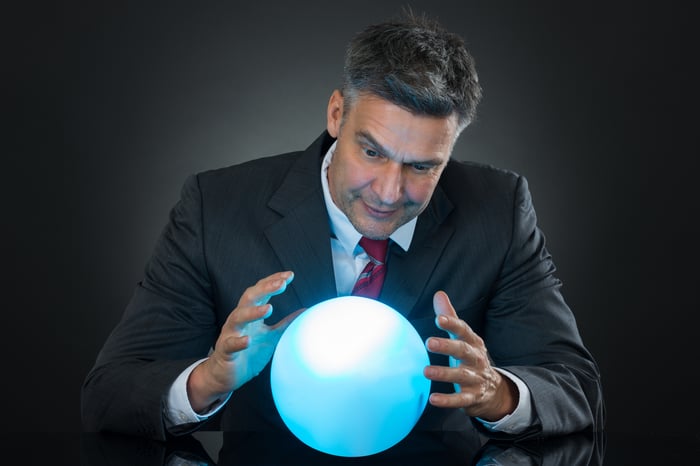 To understand what's ahead for Shopify, you need to look back at where it's come from. Image source: Getty images.

At the end of 2018, revenues outside the U.S. and Canada only represented 23% of the company's total. This number is actually pretty impressive given that the platform was only available in English until 2018. Recently, the company has focused on creating more local-friendly versions for international merchants. Today, customers can see their checkout carts in more than 50 languages and pay for their goods in multiple currencies through integrations with more than 100 global payment providers.

In the most recent quarter, international was the fastest-growing customer segment in gross merchandise volume (or the total value of goods sold), showing that this segment will be a significant source of growth in the coming years.

In addition to foreign-country localization efforts, the company is obsessed with improving its platform to make e-commerce better for entrepreneurs.

From the beginning, Shopify has focused on making it easier for entrepreneurs to sell products online. It provides a brand-friendly alternative to Amazon's third-party seller network for companies that want to sell in virtual stores. Customers might choose the platform because the solution allows them to highlight their brands, but they stay because the software is constantly being improved.

This year, the company announced a $1 billion investment in its Shopify Fulfillment network, making it easier and cheaper for U.S.-based online stores to run their physical fulfillment and integrate the shipping operations with the platform. But it will take several years for the benefits to fully materialize for customers and the company. Costs will be spread over the next five years, and the network isn't expected to turn a profit until 2023.

Not only is the company focused on making things easier for its customers, but its revenue growth is tied to their success on the platform.

Shopify succeeds when its merchants succeed

Merchant solutions revenue makes up the bulk of the company's net sales. This revenue stream is primarily made up of fees taken from every sales transaction such as fees for shipping, payments, and Shopify Capital. This segment's revenue is highly correlated with gross merchandise volume (GMV). As online stores become more successful and sell more goods, this revenue stream grows. Even though GMV growth has been slowing, it is still a big driver for the company and will continue to be for years to come.

As it has become a much bigger company, overall top-line growth rates have slowed. But with full-year 2019 revenue projections of $1.545 billion to $1.555 billion driving increases of 44% to 45% year over year, its growth rates are still impressive. With a world of opportunity ahead and its proven ability to innovate for merchant benefit, five years from now, Shopify will likely capture the No. 2 spot in the U.S. and be a much larger global player.