Shares of Rockwell Automation (NYSE:ROK) jumped more than 13% on Tuesday morning after the industrial technology company reported better-than-expected results for its fiscal fourth quarter, and guided for an earnings range that exceeds analysts' consensus forecast for its next fiscal year. Many industrial-focused companies are suffering amid the current slowdown in the manufacturing sector, but Rockwell appears to have a portfolio that can weather this storm.

Rockwell Automation, which provides robotics and technologies that help automate factories and assembly lines, reported adjusted earnings of $2.01 per share on revenue of $1.73 billion, beating expectations for EPS of $1.92 on sales of $1.65 billion. Its operating margin fell slightly from 20.8% to 20.2% due to restructuring charges, but for the full fiscal year, its operating margin was up. 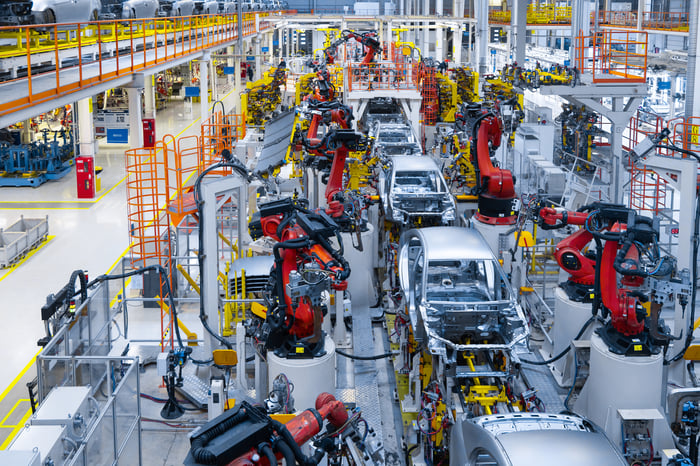 Ahead of this report, investors had feared Rockwell Automation's manufacturing customers were cutting their capital spending, and management twice reduced its earnings guidance this year. But the  company credited its wide reach with helping power this latest earnings beat.

"Our broadening portfolio helped deliver better-than-expected performance in the quarter," CEO Blake D. Moret said in a statement. "Organic sales growth of 1.4 percent was driven by continued strength in oil and gas, mining, and life sciences, as well as better performance in automotive and food and beverage."

Rockwell Automation also provided an optimistic outlook for its fiscal 2020, saying it expects earnings of between $8.70 and $9.10 per share. Analysts had been expecting $8.52 per share. Moret says he expects cost-cutting moves undertaken this year to boost results, and said the strength of the company's products should be a counterweight to the weakness in the industrial sector.

"Our outlook balances geopolitical uncertainty with confidence in our differentiated portfolio and ability to gain share," Moret said. "We will complement organic investments with inorganic opportunities that best align with our strategy."

Rockwell's core business, placing automation and Internet of Things tech inside factories, could be attractive in a slowing market as manufacturing customers attempt to streamline and do more with fewer workers.

It's been a roller-coaster year for Rockwell Automation's shares: They've traded up 10% and down 10% on the year at various points in 2019 prior to Tuesday's surge. Given the economic climate, more volatility is possible in the near term, but for long-term investors, this company is heading in the right direction.