Yesterday, social networking giant Facebook (NASDAQ:FB) introduced Facebook Pay, which allows users to make payments across all of its major platforms including Facebook, Messenger, WhatsApp, and Instagram. The tech company has been slowly integrating payment systems into its services for years, adding peer-to-peer (P2P) payments in Messenger back in 2015.

E-commerce is among Instagram's most promising opportunities, and Facebook added an integrated checkout feature to the popular photo- and video-sharing service earlier this year (purchase links previously redirected users to external sites). 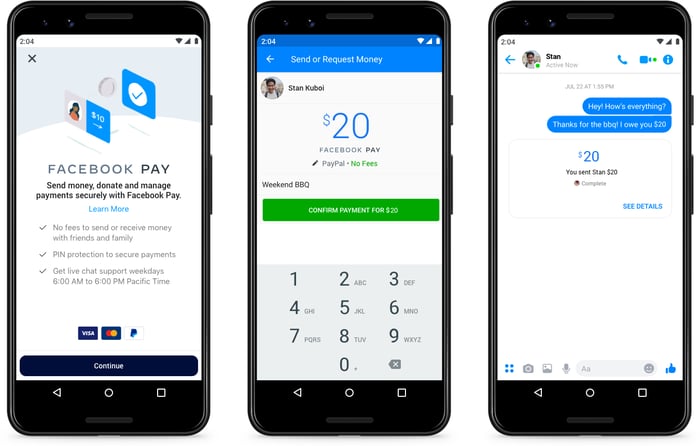 Facebook says it wants to provide a convenient, secure, and consistent payment experience across its services. In consolidating the payment infrastructure, users can enter payment credentials just once for use on any of the platforms without having to reenter the information. Users will have control over which apps tap into Facebook Pay, which will not be automatically turned on for all services.

The service is launching in the U.S. this week on Facebook and Messenger, with Instagram and WhatsApp support coming in the near future. Facebook Pay will bear the new branding that the company introduced last week, seeing as how it isn't limited to the core Facebook app and Facebook is trying to make it more overt when using its services.

In a major strategic shift, Facebook Pay can also be used to make purchases from certain Pages and businesses on Facebook Marketplace, the classifieds service akin to Craigslist. Like Craigslist, Marketplace had historically just been a listing service and did not participate directly in any transactions. In processing payments for some Marketplace transactions, the social giant might be able to earn a cut while also taking more responsibility. Some purchases will be covered by Facebook's purchase protection policies, for example. The company started monetizing Marketplace with ads last year.

Facebook Pay will use various payment processing partners like Stripe and PayPal. The service is completely separate from Libra and Calibra, the cryptocurrency and digital wallet that Facebook has been working on and has already started to receive criticism over.

The news comes as Facebook is in the similar process of unifying messaging across its platforms, a move so controversial that it reportedly contributed to Chief Product Officer Chris Cox's departure earlier this year.

Considering Facebook's myriad data scandals and privacy controversies, some skepticism over handing over financial data is warranted. The company says it will encrypt card and bank account numbers while monitoring for suspicious activity. Users will set up a PIN for verification, but they also have the option to use smartphone biometrics such as fingerprint or facial recognition for added security.

Facebook concedes that activity on Facebook Pay will inevitably be used for ad targeting. "For example, if you buy a baseball glove on Facebook Marketplace, you might see an ad for a baseball bat," the company says. Users can also choose to share purchases to their feeds.

Do you trust Facebook enough to hand over your credit card?