It's now been over a year and a half since social networking juggernaut Facebook (NASDAQ:FB) rolled out Marketplace, its second shot at local commerce that competes with Craigslist as a classifieds service. Much like Craigslist, Marketplace is merely a listing service and does not directly facilitate the transaction or process payments, which both limits its liability because Facebook plays a limited role and reduces its monetization potential since the company is not entitled to a cut of transactions.

Instead, Facebook is turning to a familiar monetization model: ads. 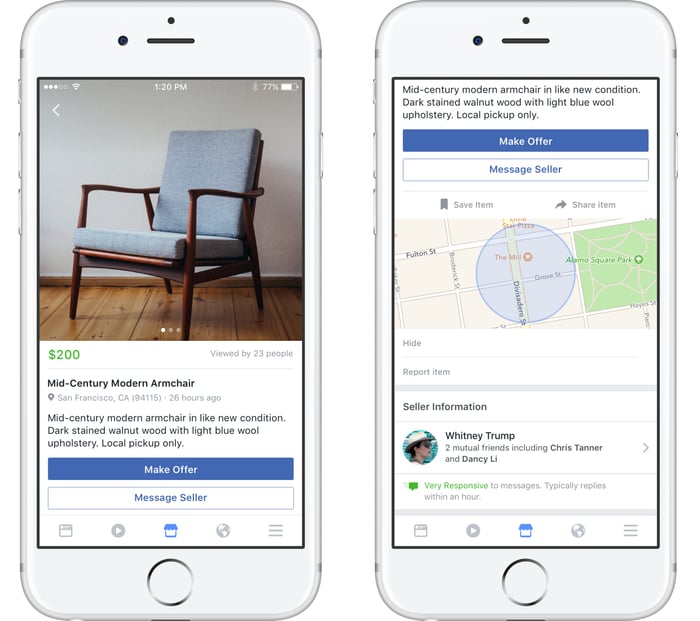 For ad buyers, big and small

Earlier this week, Facebook announced it was rolling out promoted Marketplace listings, initially as a limited test in the U.S. Marketplace is being added as a placement option for advertising customers, in addition to mainstays like News Feed, Instagram, Messenger, and Audience Network.

The option isn't limited to just businesses, either: Facebook is also allowing regular users to promote their own listings to nearby users. The only targeting options available for regular users initially will be just specifying a zip code or only displaying the listing to users above the age of 18. Regular users will be able to set ad budgets and determine how long the campaign will run, and once the listed product is marked as sold, the ad will automatically come down.

Pricing will be determined by ad auctions, where the user will compete with others with the same targeting settings. However, the auction winner won't necessarily just go to the highest bidder, but instead will go to whoever Facebook deems to be delivering the best value for both the ad buyer and ad viewers. It's not clear how Facebook's algorithms will make this determination.

How many users does Marketplace have?

Typically, Facebook first prioritizes growing the user base of any new service before it flips on the monetization switch. The company only recently started trying to monetize WhatsApp, the messaging service it paid so handsomely for back in 2014. In that case, the threshold that CEO Mark Zuckerberg had laid out was 1 billion users.

Certainly, Marketplace isn't anywhere near 1 billion users, which would represent nearly half of Facebook's 2.2 billion monthly active users (MAUs), but the fact that Facebook is starting to test monetization strategies does imply that usage of the service is respectable. Marketplace does have its own dedicated tab (one of only three) in the core Facebook app, after all, while most ancillary services get buried in the sidebar.

As Facebook brushes up against its self-imposed limit on News Feed ad load (for the sake of user experience), it continues to search for other avenues to deliver ads to users. Marketplace is just the latest.