While the aesthetics market is growing at a substantial pace, not every company in this field has been doing well. Medical aesthetics product maker Sientra (NASDAQ:SIEN) has been on a downward trend over the past year, giving back around half of its market value during that time frame. However, shares of this $437 million healthcare stock shot up significantly last week when the company announced impressive third-quarter sales figures and boosted its year-end guidance.

While it's definitely a piece of much needed good news for Sientra, there are still a few areas of concern that investors should keep in mind before adding this stock to their portfolio. Below we'll look at Sientra's recent financial results as well as some pros and cons surrounding the company. 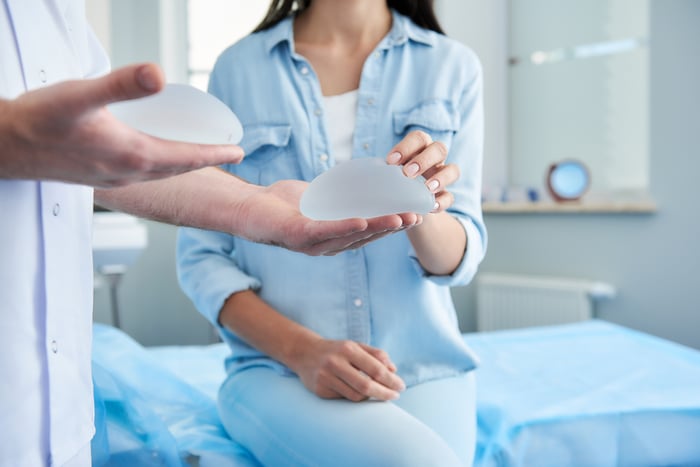 Diving into the financials

Sientra posted strong financial metrics on Friday that beat Wall Street's expectations, with Q3 revenue increasing from last year's $16.9 million to $22.4 million. This wasn't the first time Sientra outperformed expectations, either, as the company has consistently beaten Wall Street's revenue estimates for the past year.

Sientra's sales are split between two main sources. The first comes from the sale of miraDry, a nonsurgical treatment for excessive underarm sweating. Its second main revenue driver is the sale of breast products, such as implants, which has seen the most growth out of the two areas. Out of the original $22.4 million revenue figure, $12.6 million came from sales of breast products, which are up 47% year over year. The remaining $9.8 million came from miraDry sales, which have grown by a more modest 18% year over year.

But a problem is the company's struggle to become profitable. Sientra reported that its gross margin fell by 5.6% to 56.5%, while net losses increased to $22.4 million, or a loss of $0.45 per share. The fact that the company's margins worsened is definitely something investors should note and keep an eye on in future quarterly results.

Lastly, Sientra's cash position is currently at $121 million, a decline from the previous quarter's $146 million but still sufficient to last the company at least a year assuming expenditures remain the same. In the world of small-cap healthcare stocks, having one year of cash on hand is OK if a company's products are experiencing strong sales growth, which Sientra's are.

Sientra also announced it was acquiring an FDA-approved silicone breast implant manufacturer, Lubrizol Life Science. The deal is a major step up for Sientra since it will give the company much more control over the development and manufacturing of its products.

The strategic importance of this transaction cannot be overstated. Vertical integration of our Breast Implant business is a critical step in Sientra's overall business model evolution and creates significant value for both plastic surgeons and shareholders. ... Having control of our product development and manufacturing is imperative for a Class III breast implant company given the complex competitive dynamics, product margin requirements and product development advantages to maintain the highest safety and quality standards of any of our competitors.

Sientra is paying $20 million in cash for Lubrizol alongside a further 600,000 in shares depending on whether Sientra's stock price hits certain milestones.

Much like Sientra, it also saw significant increases in revenue for its own implants, reporting $21.7 million in the second quarter of 2019 back in August -- a 58.2% increase from the previous year. The biggest difference between Establishment Labs and Sientra is its net losses and cash balance, with Establishment Labs reporting only a $9 million quarterly loss and a cash balance of $31.9 million. Despite generating similar revenue figures, Establishment Labs' overall losses are just a fraction of Sientra's.

Overall, Sientra does have some advantages over its immediate rivals, such as a more diverse product portfolio in terms of miraDry as well as this Lubrizol acquisition, which might improve profit margins and the quality of its breast implants. However, its losses are significantly higher than some of its competitors', which is something to keep in mind.

Sientra definitely has some positive signs going for it. Its strong revenue performance and history of outperforming Wall Street estimates are encouraging. The company's management has now increased its year-end revenue guidance to $83.5 million for the year, a 23% increase from 2018's $68 million.

At the moment, all eight Wall Street analysts covering Sientra have a buy rating for the stock, which is understandable given the company's improving sales figures. However, its losses are still significant enough that investors should remain cautious, especially since there are many promising small-cap healthcare/biotech stocks to chose from.

I would wait a few more months to see if Sientra's losses end up improving alongside its sales figures. While it's definitely a stock to watch out for, it's one that seems a little too risky to invest in at this time.