Ubisoft (OTC:UBSFY) has posted the worst stock performance of the four major Western third-party game publishers this year, lagging far behind its rivals Activision Blizzard, Take-Two Interactive, and Electronic Arts. The company's share price has fallen roughly 40% over the last six months as underperformance for key franchises and delays for high-profile releases have dimmed the business's outlook. 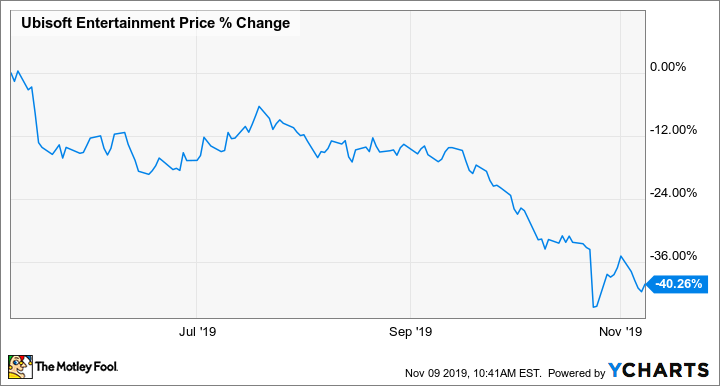 It's not surprising that Ubisoft stock has taken a beating. The game developer and publisher isn't hitting the high-quality marks of rivals like Take-Two Interactive or Activision Blizzard, and some of the big franchises that investors were counting on now look weaker than expected. On the other hand, the dramatic sell-offs are partially in reaction to setbacks that can be remedied with some time, and there's a good chance the French video game company will bounce back from its slump.

Ubisoft stock started to lose ground in May after the company announced that its game The Division 2 had fallen short of sales estimates, and underperformance for its October release Ghost Recon: Breakpoint has dealt another blow to the game maker. The company then published worrying guidance for the first half of its current fiscal year on Oct. 24 -- just six days before its official report. The guidance press release revealed delays for several big titles and sales and earnings targets that were worse than many had feared. This caused its stock to fall more than 16% in the day's trading.

Across the first half, net bookings fell roughly 11.4% year over year, and non-IFRS (adjusted) operating income fell 93.8%. Weaker-than-anticipated receptions for Ghost Recon: Breakpoint and The Division 2 prompted the company to reassess its release strategy, and it moved to delay upcoming titles Watch Dogs Legion, Rainbow Six Quarantine, and Gods and Monsters into the next fiscal year. 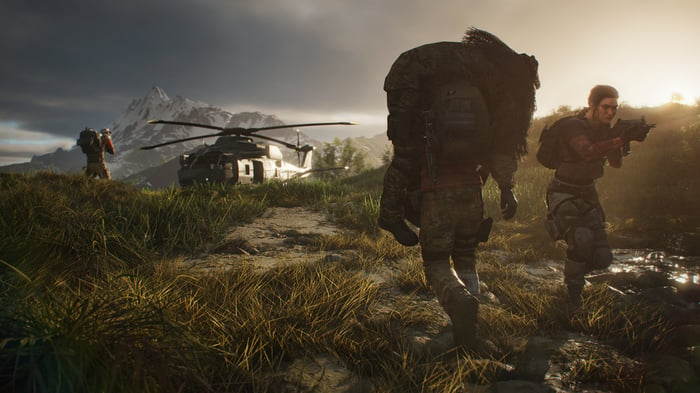 Putting these setbacks in context

Delays for big video games aren't unusual, and creating a successful triple-A release requires a large number of moving parts to come together successfully. Weak performance for big-budget titles is something that every major publisher in the industry faces periodically. That's not to minimize Ubisoft's recent failings, but success for large game companies still revolves around high-profile releases, and it's a reality that they don't always go well.

Performance for Ghost Recon: Breakpoint is a big disappointment coming on the heels of the largely successful Ghost Recon: Wildlands. The Division 2 appears to be unlikely to evolve into the franchise-elevating sequel that the company undoubtedly hoped it would be. Adding to the uncertainty, extra development time for Watch Dogs: Legion, Rainbow Six Quarantine, and Gods and Monsters means extra costs, and the delayed titles do not have firm release dates.

The good news is that the delayed games should all be ready for the company's next fiscal year, and management expects that a stronger release schedule will help it post bookings of 2.6 billion euros for the period and adjusted operating income of roughly 600 million euros. That's a target that could prove conservative given that Ubisoft likely has other triple-A games due for release next year, and it may reflect that the company has already reduced expectations for some of the delayed titles. Smart release timing or strong performance for other games in the pipeline could allow the publisher to surpass its current guidance.

Delaying Watch Dogs: Legion or Gods and Monsters to coincide with the launches of Sony's PlayStation 5 and Microsoft's next-generation Xbox next year is a potential move that might help the titles stand out. New console launches typically have relatively sparse software lineups, and gamers are eager to try out new titles on their upgraded hardware. It's possible that Ubisoft could go this route and wind up getting better performance out of titles that may have otherwise put up much weaker sales. Even if that doesn't prove to be true, the worst-case scenario over the next year is that the company endures a string of disappointing releases. That seems to already be largely priced into the stock, and it's a scenario that the company could probably bounce back from.

Ubisoft is moving through a rough patch, but the company will likely be lifted by a series of long-term tailwinds for the broader games industry. Now could be a good time for patient investors looking for discounted positions in the video game space to add shares of Ubisoft. The company is valued at roughly 10 times next year's adjusted operating income target and roughly 2.3 times projected bookings. Investors shouldn't put too much weight behind those metrics, especially because the delays are making for an unusually full release year, but the stock doesn't look prohibitively valued at this point.

The company will have an opportunity to kick-start momentum for some of its key franchises and debut new properties with the launch of new consoles from Sony and Microsoft next year. And like other industry players, Ubisoft should continue to benefit from more video game sales taking place through direct digital downloads instead of brick-and-mortar retail channels like GameStop and Walmart.

The company is also likely to benefit from bridging more of its franchises to mobile platforms and expansion for the total number of video game consumers in the global market. It has a long runway for growth in Asia especially. Even as China is making efforts to curb the amount of time that children spend playing games and continues to require foreign companies to partner with domestic ones in order to publish games there, Ubisoft has a lot of potential for expansion in the country.

The company has bankable franchise properties in Assassin's Creed and Rainbow Six, and other franchises (including Ghost Recon) could be reenergized and put to better use. Franchises like Rainbow Six and Ghost Recon have growth potential in the e-sports space, and Ubisoft will have opportunities to create new properties to tap into the evolution of competitive gaming.

Ubisoft needs to do a better job with innovation, but it should be able to turn the ship around.