Shares of Precision BioSciences (NASDAQ:DTIL) rose as much as 19.5% today, as the company continues to benefit from its pipeline update that took place on Nov. 6. The gene-editing company released initial clinical data from its first drug candidate, PBCAR0191, demonstrating its potential to treat cancers of white blood cells, such as non-Hodgkin lymphoma (NHL).

Two of the three patients in the low-dose cohort achieved an objective tumor response, while the third showed signs of anti-tumor activity. That's about as good as the company could have hoped for in the early stages of development. It's also reminding investors that CRISPR gene editing isn't the only game in town -- and that Precision BioSciences' specific approach could prove valuable in engineering immunotherapies. 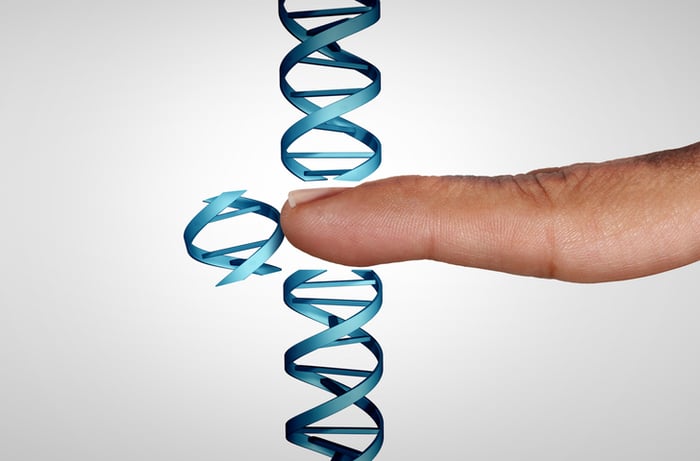 Precision BioSciences is developing the ARCUS gene-editing platform, which offers several potential advantages over the more familiar CRISPR-Cas9 tools. The cutting enzymes are smaller, which makes it easier to deliver the genetic medicines. The enzymes don't make a double-stranded break in DNA, which could improve safety. It has also proven to be more accurate and more efficient at making genetic edits. And it's not subject to the bitter patent disputes and tangled web of licensing agreements affecting CRISPR tools.

In addition to those advantages, Precision BioSciences has wisely chosen to focus initially on engineering immunotherapies, rather than on directly editing cells in a patient's body. That gives researchers more control over the edits being made, and allows for a more homogeneous product.

The lead drug candidate, PBCAR0191, applies the ARCUS gene-editing platform to chimeric antigen receptor T cells. The idea is to engineer CAR-T cells to overcome their single largest limitation: strict patient matching requirements. By editing the surface of CAR-T cells, it may be possible to manufacture a product that can be used by any patient. The "off-the-shelf" approach could be combined with other genetic edits to make immunotherapy, already a promising treatment paradigm, the preferred treatment option for white-blood-cell cancers in the long run.

Investors shouldn't get too carried away; Precision BioSciences has only reported limited data from just three patients. It plans on presenting additional results from the ongoing phase 1/2 trial on Dec. 9 at the Annual Meeting of the American Society of Hematology (ASH), including results from the same three patients in the low-dose cohort and patients in the cohort with the next highest dose.

But that doesn't mean the current rally is unsustainable. Considering the gene-editing company had a market cap of just $325 million at the beginning of November, the stock's ascension could simply be a sign of investors nodding to the potential of the ARCUS platform.