The holidays are just around the corner, which means millions of people will be whipping out the cash or credit cards to purchase electronic gadgets and entertainment. It also means more business for consumer-facing tech stocks that have the products and services consumers are coveting.

According to the National Retail Federation (a trade association), consumers are projected to spend between $727.9 billion and $730.7 billion on holiday purchases this year, marking a 3.8% to 4.2% increase from 2018. The increase in spending is being driven by a strong economy, low unemployment and consumer confidence, which remains high.

Whether individuals are spending their holiday funds on new PCs, streaming video content devices, or simply need a ride to the office holiday party, these three stocks stand to benefit in November. 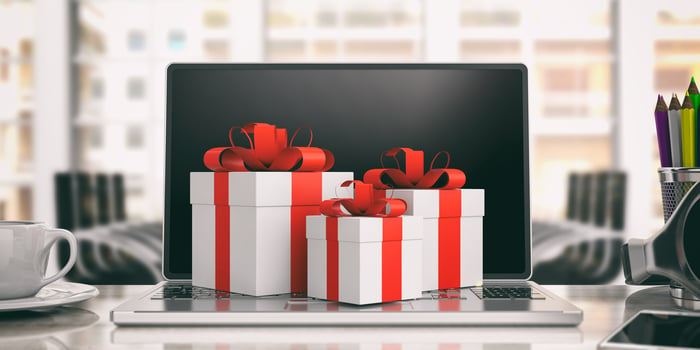 1. Roku may be up, but there's still room to grow

Streaming content services are all the rage as Disney and Apple enter the fray with their own services just in time for the holidays. One company taking advantage of the trend is Roku (NASDAQ:ROKU), which operates a streaming content platform and makes devices on which customers can stream content. Its main competitors are Alphabet's Google, which makes Chromecast, and Amazon's Fire TV.

Roku shares have been on a tear this year, with the stock up 216% year to date. It did take a hit earlier in November after reporting third-quarter earnings results that fell short of Wall Street expectations. The Los Gatos, California-based company weighed in with a loss of $0.22 a share, but Wall Street was looking for a narrower loss of $0.18 a share. This marked the first time the company missed expectations in the past eight quarters.

However, that sell-off could present a buying opportunity given the company is expected to benefit from the holiday selling season. Its platform ad sales growth also continues to accelerate, with revenue up 50% year over year in the third quarter. It also completed the three-month period with 32.3 million active accounts, more than the 30.5 million it ended the second quarter with. Revenue from its platform services jumped 79% to $179.3 million, while hardware sales were up 11% to $81.6 million.

Netflix may bristle when new services come to the market, but for Roku, the more the merrier. This is something often lost on investors; they think Roku stands to lose business from the increased providers, but it really means Roku can offer more content to its customers.

"They're obviously going to drive viewing overall on our platform and engagement, which is good ... They're going to increase the interest in viewership moving from traditional TV to streaming," Roku Chief Executive Anthony Wood said on the company's third-quarter earnings call about Apple TV+ and Disney+ launching. "We think that eventually, all TV is going to be streamed, and that the rise of all these new services will help encourage that transition."

With its Roku TVs, sticks, and players appearing on many consumers' holiday wish lists, the end of the year should be a good time for this tech stock.

2. AMD firing on all cylinders

A new laptop or desktop computer has long been a popular gift during the holidays. After all, what better time to give your teenager a gaming PC with a killer graphics card and tons of memory? At least that's what Advanced Micro Devices (NASDAQ:AMD) is banking on this holiday season.

AMD makes semiconductors that serve as the brains for PCs, servers, and graphics. It has long played second fiddle to rival Intel, but more recently, it has been churning out products that are resonating with its customers. Its stock is up 80% year-to-date, although it did suffer a decline on the heels of its third-quarter earnings, which came out in late October. For that three-month period, it posted adjusted earnings of $0.18 a share and revenue of $1.8 billion. It marked the highest quarterly revenue since 2005, and its highest quarterly gross margin since 2012, yet investors still sold off the stock. It didn't matter that the chipmaker is seeing strong demand for its semiconductors heading into the holiday season.

AMD said on an earnings conference call that it's seeing strong demand for its Ryzen 3000 and Ryzen 2000 processors. The chipmaker is also expanding its desktop product offering this month, launching what it claims is the first 16-core mainstream desktop processors and its third-generation Ryzen Threadripper processor family.

As for mobile, AMD said laptops with its chips inside increased 50% in 2019, including the first-ever AMD-powered Microsoft Surface laptop. "We have the strongest product portfolio in our history," AMD CEO Lisa Su said on the conference call. "We're on track to exit 2019 with another quarter of significant growth."

With holiday gift-giving on the horizon, AMD should continue to see momentum, which should benefit the stock.

3. Holiday revelers to turn to Uber for rides

To say Uber (NYSE:UBER) isn't doing so hot since its initial public offering in May would be an understatement. The stock is down 34% since its public debut as investors worry about how it will turn a profit. That was on full display when Uber reported third-quarter earnings earlier in November. It was able to beat Wall Street expectations, posting a loss per share of $0.68 and revenue of $3.81 billion. But the net loss of $1.16 billion in the quarter, which was wider than the $986 million loss it had in the year-earlier third quarter, has weighed on the stock and investor sentiment.

Uber is forecasting EBITDA profitability in 2021, saying on an earnings conference call the ride-hailing company is past the stage of growing rapidly and is now focused on achieving efficiencies that will result in profitability. "The focus really is to drive lower rates based on the best technology out there rather than driving the growth through discounting," Uber's CEO Dara Khosrowshahi said on the call. He pointed to offering cheaper rides to customers willing to wait longer or walk to a location to get picked up as examples.

While profit eludes Uber, at least for now, one thing is almost a certainty: The ride-hailing service will be busy this holiday season. Whether people need rides from the airport or train station to visit family or friends, or to get home from a holiday party, Uber will be in demand. If its customers use the service more efficiently, it could help Uber get one step closer to profitability, which may give the stock a much-needed boost.