One of the bigger stories in tech over the past couple of years has been the ascent of Advanced Micro Devices (NASDAQ:AMD). AMD used to be the also-ran of the CPU and GPU markets, lagging the dominant leaders Intel in CPUs and Nvidia in GPUs.

Yet that's beginning to change. After taking the helm in 2014, AMD CEO Lisa Su mapped out a way forward to catch up to these bigger rivals. She decided to skip the 10-nanometer node on AMD's portfolio of chips and go straight ahead to 7-nanometer. That decision, made a few years ago, has catapulted AMD ahead of Intel this year in the race to 7-nanometer CPUs for both PCs, desktops, and data centers.

Nevertheless, AMD's recent earnings report only showed a paltry $0.08 in non-GAAP (adjusted) earnings per share (EPS). Additionally, the company lowered its full-year guidance, which has been impacted by the trade war with China and declines in the current game console cycle.

Of course, AMD's valuation in the low $30s isn't projecting just this year's results, but its future a few years out. What could that look like? 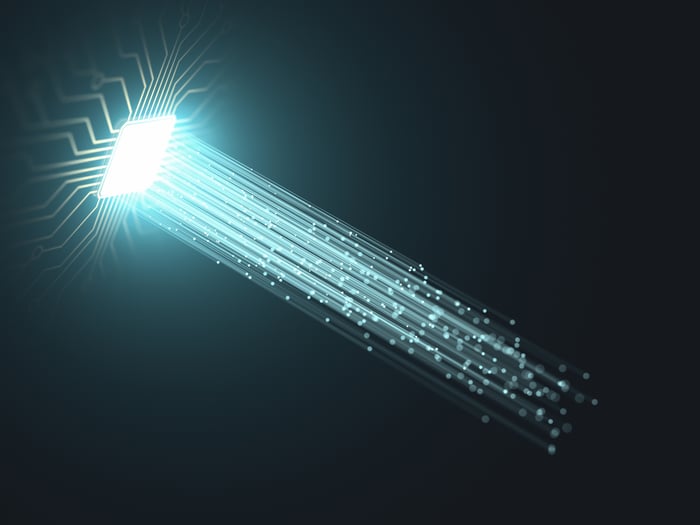 Where will AMD be in 5 years? Image source: Getty Images.

The large markets AMD is targeting

AMD's current CPUs and GPUs serve the personal computing, gaming, and data center markets. According a recent company presentation, AMD estimates the PC addressable market will reach $30 billion in 2020; the "immersive" market, including gaming, augmented and virtual reality, will reach $15 billion; and the data center market is set to reach $29 billion across CPUs and GPUs by 2021.

That's a combined total addressable market of $74 billion. And yet AMD's trailing 12-month revenue of $5.875 billion would only amount to roughly 8% of that combined market. Breaking that down by product, AMD only had about 2.9% CPU market share in the data center at the end of the first quarter, and 17% and 13% of the desktop and PC CPU markets, respectively. AMD also had about 22% of the discrete GPU market at the end of the first quarter, a gain from the prior quarter, but lower relative to last year, when it reached the high 30% range at one point.

So, how much of these huge markets could AMD take?

The most important product for AMD could be its new 7nm "Rome" EPYC CPU chips for data centers. The data center market, though in a bit of a lull currently, seems poised to grow in the years ahead, with the ascension of artificial intelligence and cloud computing.

Additionally, AMD seems poised to gain a lot of market share from incumbent Intel. For instance, AMD had important recent customer wins from leading cloud platform Amazon Web Services and server company Dell Technologies. In addition, there have been recent rumors that Alphabet may be considering switching from Intel-based servers to AMD-based servers employing the newly released 7nm EPYC chips.

On the recent call with analysts, Su said:

Compared to our first-generation EPYC processors, we have more than twice the number of platforms in development with a larger set of partners. We also have four times more enterprise and cloud customers actively engaged on deployments prior to launch. As a result, Rome is on track to ramp significantly faster than our first-generation EPYC processor.

While AMD only has 2.9% server market share currently, management believes it can take 10% of the data center market by the end of 2020, with a longer-term goal of 25%. CPUs make up a majority of that $29 billion data center chip market, and AMD already has close to 25% share in GPUs. Therefore, if AMD can take 25% across the board, it could eventually bring in $7.25 billion in revenue just from the data center market alone, 23% more than the company made across all of its products in the past 12 months.

AMD will be introducing its "Rome" EPYC chips in an event on Aug. 7, so interested investors should stay tuned for more details on this important new product.

PC and gaming could improve, too

Recently, AMD announced that it had also achieved customer wins in the new generation of game consoles for both Sony and Microsoft. It's important that AMD retain those customers as both platforms wind down their current generation of consoles. The current video game market is facing year-over-year declines as the older generation of gaming platforms is late in its lifecycle, so the boost from new systems in the years ahead could lead to a rebound in AMD's embedded custom chips.

Of course, there's also the possibility that new gaming platforms could take share from these incumbents. But that's OK -- AMD has customer wins there, too, as AMD's next generation of Radeon graphics chips was chosen as the preferred GPU for Google's Stadia cloud-based gaming system.

Though AMD doesn't make much in the way of profits today, it has small market share, and just achieved a technological lead on Intel in several large and growing markets. Five years from now, the company could more than double its revenue with significant margin expansion.

That being said, keep in mind that the market has already at least somewhat discounted AMD's stock price. The stock trades at 136 times the past 12-month earnings and 33 times forward earnings -- which already implies lots of growth. Still, AMD's recent customer wins mean it seems well on its way to justify its current $36 billion market cap. Five years from now, it could be mentioned in the same breath as its much larger, profitable, dividend-paying competitors.