Gap (NYSE:GPS) announced on Thursday the resignation of CEO Art Peck, who's been at the helm of the struggling fashion retailer for the last five years. The move comes after Gap's surprising announcement that it will be spinning off Old Navy to focus on its own growth.

With Old Navy on the way out and a new CEO for Athleta, Gap's athletic apparel chain, there have been a lot of executive shakeups in the company, which is struggling to find stability. 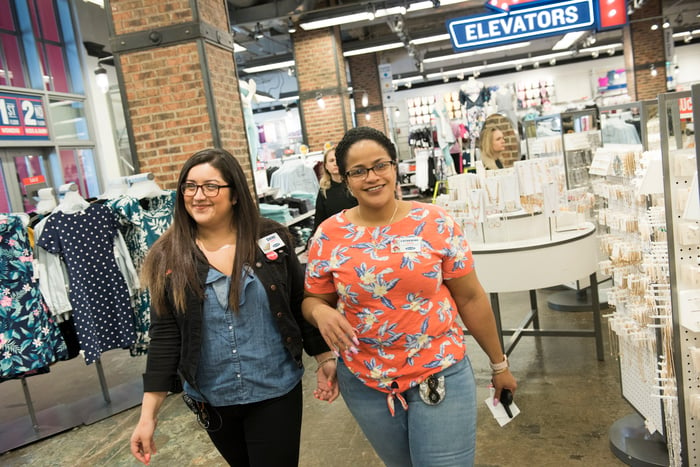 Gap will release its third-quarter earnings on Nov. 21, but management shared last week results from that quarter, which wrapped on Nov. 2. Sales continue to flounder as you can see in the declining comparable sales figures below:

Executive Vice President and CFO Teri List-Stoll said, "This was a challenging quarter, as macro impacts and slower traffic further pressured results that have been hampered by product and operating challenges across key brands."

Gap has had a string of CEOs since its ascendancy in the 1990s, but the company has been unable to recapture its dominance in retail. Peck has been the CEO since 2015, and he recently made several attempts to streamline production, cut costs, and close stores to refocus, but that hasn't helped sales.

Robert J. Fisher, a son of Gap's founders and acting interim CEO, said that in the search for a new leader, the "focus will be on strong leadership candidates with operational excellence to drive greater efficiency, speed, and profitability." But isn't that what Peck was doing? When he took over the reins of the company, he overhauled the company's culture, removing the creative hold on the company and opting for efficiency instead. He took the creatives out of management and replaced them with operations people, and he coached his team to monitor trends using widely available data analytics.

But Gap is trying to better maintain what's left of the company after Old Navy spins off, which is actually a lot, and it needs a fresh start. The company still owns several profitable brands, and it needs to become relevant again to make the most of what it already has.

Is there a way out?

There are many ways to look at the predicament in which Gap now finds itself. On one hand, it's facing competition from cheaper and trendier stores like H&M, while it stubbornly sticks to the casual basics that brought it success years ago. It's also having trouble finding its place between Banana Republic's more upscale offerings and Old Navy's cheap and chic.

Investors may be wary, too. Gap's stock has tanked during Peck's tenure, from around $40 per share when he started to just $18 per share when the company announced his departure. Finding a new CEO is a hopeful, or desperate, attempt to get back on track, but considering Gap's history of instituting new leadership, this move offers no guarantees that will bring about the change the company so urgently needs to return to growth.

Gap must choose a niche in the fashion world that's in line with current trends. Stubbornly staying in one spot while its customers move on is not going to bring them back. And the company has to show the world that in its new vision, it's capable of delivering the best experience to shoppers. The company has laid the groundwork with its digital transition, and it has the capacity to target multiple channels. The game is far from up for this retailer, which has managed to stay up to date with operational advances even as it stagnates with styles.

Art Peck was spot on when he decided to release Old Navy to focus on Gap's growth. Now, the company has to take the reins and run with it.