Major benchmarks set records as investors considered positive earnings reports and encouraging signs of a trade agreement with China. The Dow Jones Industrial Average (DJINDICES:^DJI) closed above 28,000 for the first time and the S&P 500 (SNPINDEX:^GSPC) set a record as well. Healthcare and technology led the market higher.

As for individual stocks, two semiconductor companies reported strong results, but investors were more interested in their outlooks for next quarter. NVIDIA (NASDAQ:NVDA) gave conservative guidance, but Applied Materials (NASDAQ:AMAT) sees signs of a semiconductor recovery. 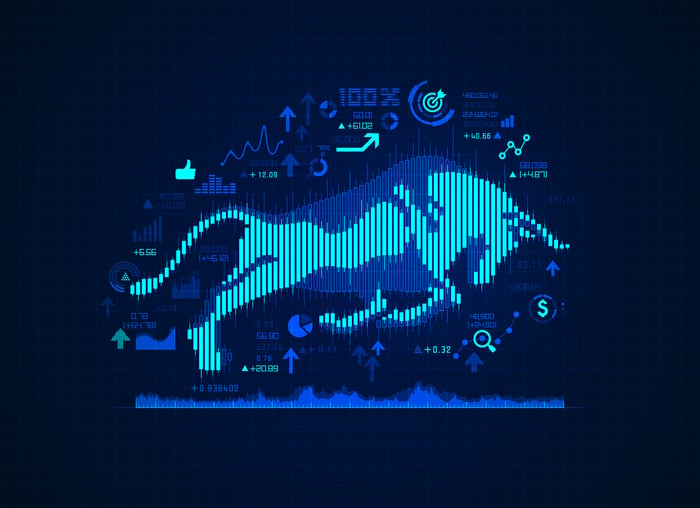 NVIDIA continues to make its comeback

Revenue and profit declined less than expected in NVIDIA's third quarter, but guidance for Q4 was softer than analysts were forecasting, and shares slid 2.7%. Revenue fell 5% to $3.01 billion, compared with the $2.91 billion analyst consensus. Non-GAAP earnings per share slumped 3% to $1.78, but Wall Street had been braced for a 15% decline.

The GPU specialist's gaming platform revenue was $1.66 billion, down 6% compared with a strong quarter a year ago, but up 26% sequentially in the highly seasonal business. Data center revenue of $726 million was down 8% year over year but up 11% from last quarter. Gross margin improved 3.2 percentage points from a year ago, helped by lower costs and higher selling prices for NVIDIA's gaming chips.

Looking forward, the company highlighted expectations for strong growth in its data center segment, saying in the conference call that use of artificial intelligence (AI) for voice recognition in a wide variety of industries is driving chip sales. But NVIDIA's guidance for Q4 revenue of $2.95 billion, while representing a return to growth, was below the $3.06 billion analyst consensus.

Applied Materials, maker of semiconductor manufacturing equipment, reported results for its fiscal Q4 that beat expectations and gave strong guidance for next quarter, propelling shares up 9%. Net sales were roughly flat at $3.75 billion and non-GAAP earnings per share fell 6% to $0.80. Analysts were expecting the company to earn $0.76 per share on sales of $3.68 billion.

What impressed Wall Street about the report were comments by the company about strengthening demand for semiconductor equipment and a strong outlook for the next quarter. Applied Materials expects Q1 revenue to be $4.1 billion compared with the analyst consensus of $3.74 billion. It forecast EPS between $0.72 and $0.80, compared with expectations of $0.74.

Company leaders for the tech stock bellwether said on the conference call there has been a "healthy uptick" in demand for its products, and that they are seeing signs of recovery in the market for semiconductor memory, particularly in NAND. Increased spending for applications in AI, a recovery in cloud computing, and acceleration in 5G are contributing to higher investments in the industry.