I've always rooted for Macy's (NYSE:M). The company evokes nostalgia for an America long gone. Too bad you can't invest in nostalgia. Macy's has fought the retail apocalypse more than other names like Sears or J.C. Penney, but we're still witnessing a gradual deterioration of the company's health. Macy's retains a strong balance sheet, which will give it more time, but it doesn't make the shares a good buy. We've seen very little indication that comp sales will grow strongly enough to drive a meaningful turnaround. As a result, Macy's stock seems unlikely to keep up with the broader market.

Comp sales and guidance show no signs of life

Macy's profitability deteriorated in the first half of fiscal 2019. Gross margin was 38.5%, compared to 39.7% in the first half of fiscal 2018. Operating income as a percentage of revenue was 3.2%, versus 4.9% in the prior-year period. Overall, I'm not expecting any big positives from Macy's third-quarter results. U.S. retail sales were soft in September, declining by 0.3% sequentially. Considering that Macy's has struggled to grow its sales, that weakness won't have done it any favors.

For the full 2019 fiscal year, Macy's own guidance suggests meager gains in comparable-store sales. At most, the company forecasts the potential for a 1% gain. At the end of the second quarter, Macy's also projected full-year adjusted earnings per share of $2.85 to $3.05, a reduction from its previous guidance of $3.05 to $3.25. Both figures include a $0.25 benefit from asset sale gains. Those projected results would come in well below last year's adjusted earnings per diluted share of $4.18, which included $0.92 of asset sale gains. 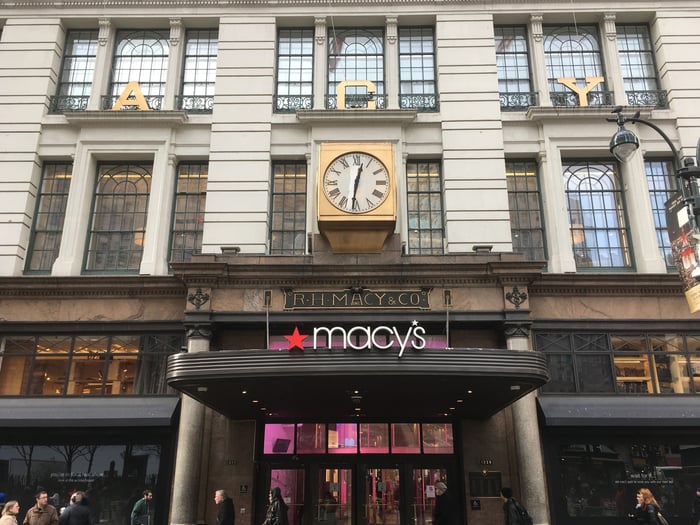 Additionally, Macy's had $4.68 billion in long-term debt at the end of the second quarter, compared to just $674 million of cash. While not nearly as concerning as the debt of J.C. Penney, for example, there's the potential for problems in the future, as I think Macy's will be forced to up its spending to remain competitive.

There's always the potential for a holiday upswing

An outlier that can always affect the story is the holiday quarter. Never count any retailer out during the holiday season, which can do funny things to consumers' pocketbooks.

Macy's had a decent holiday season back in 2017, but that was the last time we saw any magic. Macy's reported slim comp sales growth for last year's November/December holiday season, and the company was forced to cut its outlook. The poor news hammered the stock. Considering the apparent strength of the consumer right now, there is still potential for Macy's to surprise us this winter. However, while a surprise on holiday sales would give Macy's some extra wiggle room, the company still faces tough conditions overall.

The stock is not worth owning

Some bulls see real estate sales as a potential lifeline for Macy's. However, it's hard to see the retailer becoming a strictly online operation, so it will reach an equilibrium at some point after which real estate cannot be sold off. And while the 8.9% dividend yield might be a draw, it may not be sustainable, due to Macy's substantial debt.

It might seem like there's value here, due to Macy's assets and its cheap share price, but the stock actually may be a value trap. I see no real indicators that Macy's sales growth initiatives will succeed. Macy's is in a defensive position, trying to preserve what it has rather than growing the business in a meaningful way.

It seems increasingly unlikely that Macy's will achieve the financial results needed to boost the stock. Shares have underperformed the broader market in recent years, and there isn't any catalyst present to change that.