Please ensure Javascript is enabled for purposes of website accessibility
Free Article Join Over 1 Million Premium Members And Get More In-Depth Stock Guidance and Research
By Billy Duberstein - Nov 20, 2019 at 9:14AM

Trade war fears have turned shares of these top Chinese companies into bargains.

The U.S.-China trade war has definitely soured investors on China. But though the Chinese economy is definitely slowing, it's still growing faster than that of the U.S. and more of its 1.4 billion citizens are entering the middle class every day. Currently the world's second-largest economy, China is also poised to overtake the U.S. as the world's largest in the near future.

Given the long-term growth outlook but near-term headwinds, now may be great time for investors to add to their China exposure. In fact, several large, high-quality companies in China have stock now trading at very low valuations given their growth prospects, especially relative to their large U.S. counterparts. 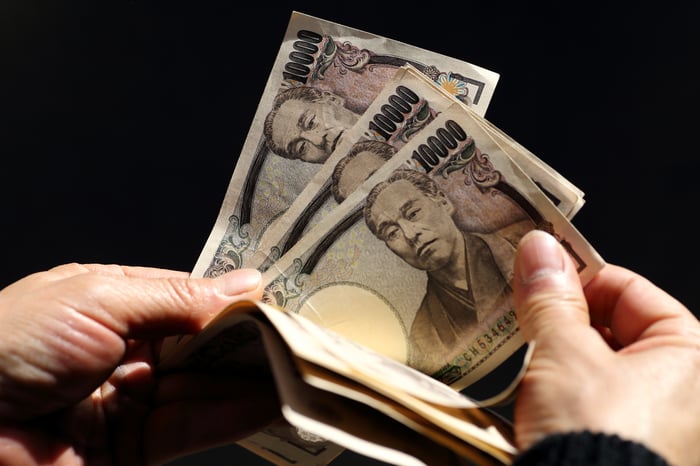 At first glance, large tech conglomerate Tencent ( TCEHY 3.94% ) may not seem like a "cheap" stock. After all, it trades for about 30 times earnings. However, that's actually a bit exaggerated, because Tencent is also a huge investor in other companies. In fact, Tencent has over 350 billion RMB (roughly $50 billion) worth of investments in other companies, which aren't included in its headline numbers. These include significant minority stakes in top Chinese companies such as JD.com, Meituan-Dianping, and Pinduoduo, along with leading American tech companies such as Snap and Tesla.

When excluding these assets from Tencent's numbers, its valuation falls to a much more reasonable P/E ratio of 26.3. That's a pretty good price for a company that just grew its top line 21% last quarter, along with adjusted (non-GAAP) earnings-per-share growth of 24%, and free cash flow growth of 36%, all in the midst of a slowdown in China.

Tencent's growth has taken a bit of a hit in the past two years, as Chinese regulators clamped down on video game approvals last year due to concerns about addiction among young people. While the authorities have begun approving new games once again, it is at a deliberate pace, and investors appear to be worried about risks to Tencent's core gaming business. In addition, the recent controversy with the NBA in China has also hurt sentiment surrounding the company, as Tencent paid handsomely for NBA broadcast rights in the country.

Still, Tencent should prosper in the long term. Its gaming empire is still producing hits, and its core WeChat social media platform continues to grow users, with social media advertising up a strong 32% last quarter, even in a challenging environment. Additionally, Tencent's fintech and cloud segment is becoming a more important growth driver: The combined segment was up 36% last quarter, helped by 80% growth in cloud services. Though that segment currently has lower margins than Tencent's core games and social media businesses, the fintech and cloud segment has also shown margin expansion as it has scaled.

Given Tencent's diverse set of wide-moat growth businesses and excellent management, investors may want to give this internet giant a look, especially in light of its lagging stock performance over the past two years and more-than-reasonable valuation relative to its growth.

Another Chinese internet giant that has fallen on even harder times than Tencent is Baidu ( BIDU 0.67% ). Baidu has been especially hurt by the downturn in online advertising in China, due to the economic slowdown, combined with the surge in digital ad inventory from newcomer competitor ByteDance. The sudden shift in Baidu's core search business earlier this year has been a huge surprise to investors, and the stock has fallen 60% since its all-time highs set back in mid-2018. 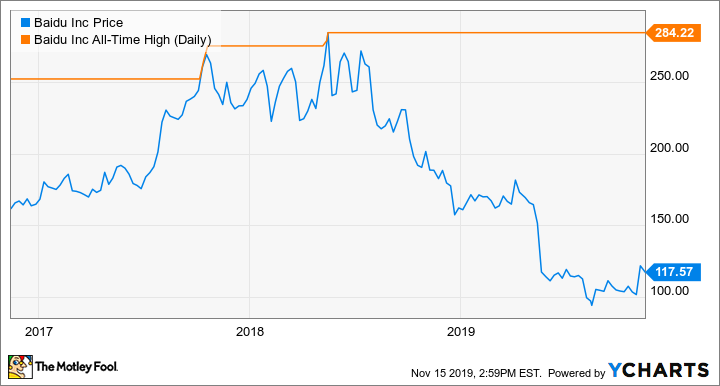 That has brought Baidu's valuation to "value stock" levels of just 16.3 times forward earnings, though that is on depressed earnings estimates. At this price, Baidu trades at 10.5 times its 2018 earnings. Though the business is going through problems, that's an awfully cheap stock price for the company that owns China's leading search engine and China's leading streaming video platform in iQiyi ( IQ -3.07% ).

In addition, Baidu's third-quarter revenue and earnings appear to have stabilized, with modest growth compared with the second quarter. When factoring out divestitures, Baidu's core advertising revenue grew 2% compared with last year, and it was up 8% sequentially. The company also gave revenue growth guidance for the core Baidu business of 0% to 6% over last year.

And while Baidu's iQiyi segment suffered from declining ad sales, subscriptions for its premium offerings grew 30% year over year, leading to an overall 7% growth for the segment. Even better, iQiyi is keeping a lid on content costs, which only grew 3%.

So while Baidu's stagnating revenue has led to declining profits this year, the trajectory of the business seems to have bottomed and may be on the verge of recovery.

Life and health insurance giant Ping An ( PNGA.Y 0.00% ) may not be mentioned in the same breath as the other, more popular internet tech companies, but it's been an aggressive developer and user of technology in its own right. In fact, management has a stated policy of dedicating 1% of revenue to next-generation technologies and spent some $1.4 billion on technology in 2018 alone.

That has enabled Ping An not only to improve its core insurance operations but also incubate entirely new businesses. Currently, Ping An is looking to execute an initial public offering of its OneConnect financial technology platform in the United States. OneConnect is more like software-as-a-service company than a financial company, helping financial institutions with sales and marketing, risk management, and customer service. It has been widely adopted in China, with revenue growth of 142% in 2018. Currently, all of the country's leading banks and 46% of China's insurance companies use OneConnect. Ping An has actually incubated or purchased four other such large-scale technology businesses, all of which are exhibiting exciting growth as digital leaders in China's growing economy.

Meanwhile, Ping An's core insurance businesses continue to grow. Through the first nine months of the year, Ping An's core life and health insurance segment, which makes up two-thirds of its profits, grew operating profit 31.2% over last year. The company's property and casualty business, which makes up another 15% of profits, grew an even more impressive 75.5% over that time. Overall operating profits grew just 21.5%, but that also incorporates not-uncommon losses from its high-growth technology businesses.

And yet, due to fears over the Chinese economy, investors can buy Ping An's high-growth insurance businesses, its internal bank, and its collection of high-growth technology software companies for less than 13.5 times earnings, with a dividend yield over 1.8%. That's a remarkable bargain, especially if compared to other tech companies, which is why Ping An belongs on your Chinese "buy list" as well.