These days, there's considerable fear around Chinese stocks thanks to the looming U.S.- China trade war. Nevertheless, some of the best-performing companies of late have been Chinese tech companies such as Meituan Dianping and Alibaba, which both posted terrific recent earnings reports. While the industrial and manufacturing companies in China are being hit by U.S. tariffs, the above examples show that at least some consumer-driven Chinese tech companies are doing just fine.

Yet my current favorite Chinese stock isn't known as a technology company...though it really is. 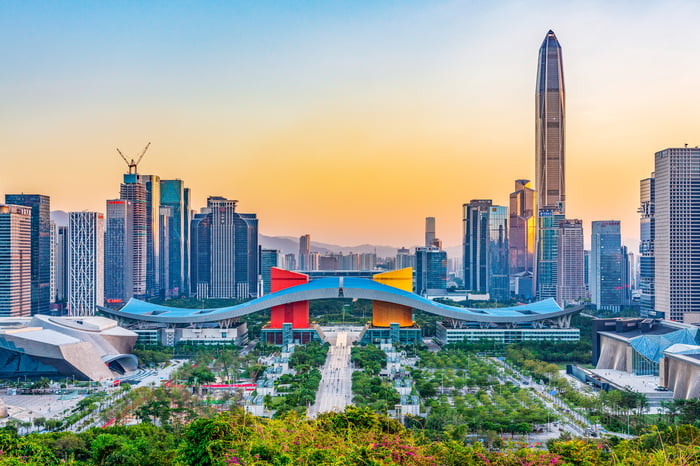 A tech company masquerading as an insurer

Ping An (OTC:PNGA.Y) is typically known as a 30-year-old insurance company with a small bank and financial services company on the side. It's also valued as such in the market. And yet, Ping An could also be mentioned in the same breath as more well-known internet giants like Alibaba and Tencent.

That's because Ping An was one of the first large companies in China to realize the power of technology, especially big data, artificial intelligence, and cloud computing. Ping An's mature yet highly profitable insurance operations have afforded it the chance to devote 1% of its revenue to innovative technologies under a "finance+technology" and "finance+ecosystem" strategy. Over the past decade, Ping An has developed or purchased several new tech businesses that are not only valuable in their own right but have also improved the company's core operations in insurance underwriting and lending.

All of these tech innovations are not only valuable in their own right, collectively valued at around $70 billion, but they also generate more precise and current data on consumer buying patterns, which feeds back into the company's AI models, thus improving Ping An's traditional businesses in a virtuous circle.

Additionally, having built out businesses across financial products, healthcare, automobiles, real estate, and smart cities, Ping An can use data to cross-sell customers. For instance, it can offer auto insurance to a customer of Autohome, or market its life insurance products to customers of Lufax or Ping An's internal bank. In the first half of 2018, the average contracts per customer increased over last year to 2.58.

Tech has also enabled features that increase customer satisfaction. The company's "Superfast Onsite Investigation" app allows customers to submit a claim with a few pictures over a smartphone, after which Ping An's AI-powered computer can settle the claim in a matter of minutes, all without having to send an inspector. Features like this improve customer retention while saving Ping An a huge amount in overhead costs.

Putting up the numbers

The extreme efficiency has led to some downright impressive financial metrics. Ping An just reported its first-half results, in which it grew operating income a whopping 23.8%, and operating return on equity expanded to 12.3% -- however, keep in mind this is an un-annualized figure. If you compound the operating ROE to get an annualized figure, it shoots up above 26%!

And if you think the high-flying tech companies under Ping An's umbrella are doing this heavy lifting, you're wrong. The core life and health insurance businesses, which make up 60% of operating profits, grew profits 36.3%, with a half-year (un-annualized) operating ROE of 21.9% (annualizes to 48.6%).

A company growing over 20% with 20% returns on equity would normally be valued like a high-flying internet platform, but Ping An actually trades at a rather pedestrian 13.5 P/E ratio, a multiple normally reserved for mature banks and insurance companies.

Ping An's technology ecosystems only accounted for about 4% of its operating profits in the first half of 2019, but management has said it hopes to one day garner up to half of its profits from its tech businesses.

With the Chinese consumer holding up amid uncertainty, Ping An's excellent recent results, deepening moat, and bargain valuation all add up to why it's my favorite Chinese stock today.