Chinese unicorn (a start-up company worth at least $1 billion in market capitalization) OneConnect Financial Technology is looking less unicorn-y by the day.

The company's American depositary shares (ADS) are scheduled to begin trading on the New York Stock Exchange tomorrow, Dec. 13, under the symbol OCFT. However, it looks as if OneConnect's existing shareholders won't be too pleased: The company just lowered both the number of shares available, as well as its overall valuation -- and this was on top of an IPO price that had already been lowered from the company's ambitions earlier in the year.

OneConnect is a unit within Chinese insurance giant Ping An (OTC:PNGA.Y). 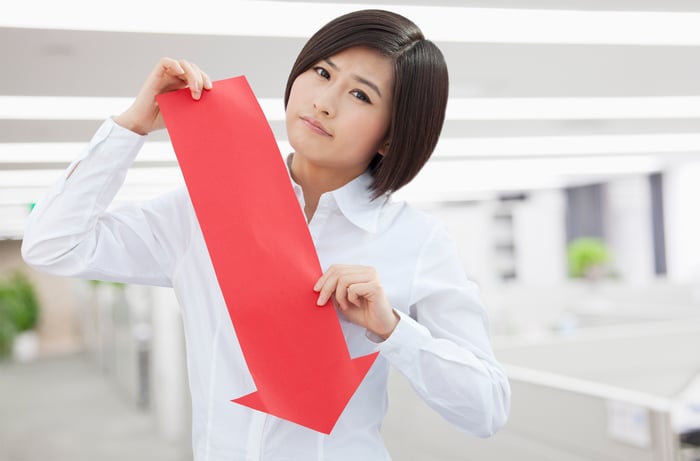 OneConnect now says that it will only sell 26 million ADS, down from 36 million, and lower the price to $9-$10, down from an original range of $12-$14. Even the upper end of this range would put OneConnect's overall valuation at just $3.64 billion, down from a valuation of around $4.86 billion, which was put forth just last week. That would only raise about $290 million, as opposed to the $470 million or so the company had recently sought.

Not only that, but even that previous IPO price was down from OneConnect's original ambitions to raise $1 billion at an $8 billion valuation earlier in the year.

The company didn't disclose the reason for the lowered pricing. OneConnect has likely been hit by several negative factors all at once. The first is a new abundance of caution on the part of technology growth investors, who have been burned by the IPOs of Uber, Lyft, and the cancelled IPOs of both WeWork and Endeavor earlier this year. This is a bit unlucky, as high-growth, money-losing companies used to be able to garner high valuations in both the private and public markets -- but that changed around September.

A second reason could be due to the renewed tensions between the U.S. and China. Although Ping An and OneConnect are mostly consumer companies and domestically focused, concerns over the Chinese economy will remain as long as the trade issues go unresolved. That's why many Chinese consumer companies continue to trade cheaply, despite putting up solid results this year.

Finally, there could be additional concern over the ownership structure of American depositary shares of Chinese companies. Due to foreign ownership restrictions, Chinese companies don't actually list their stock directly in the U.S. Rather, they incorporate new variable interest entities (VIEs) listed in the Cayman Islands. The legality is complicated, but it technically means U.S. ADS holders don't directly own shares in the company, but rather in a Cayman Islands company entitled by contract to the economic benefits of the underlying Chinese company.

While most don't think anything nefarious will happen with VIEs, the September chatter by the administration around possibly restricting U.S. investment in China could have raised alarm bells. What if, as a countermeasure, China decides to cut off VIEs from the underlying Chinese company -- and their investors along with it?

Still, that seems like a very unlikely scenario, and one that would basically make it impossible for Chinese companies to raise money abroad. Nevertheless, with trade uncertainty dominating the headlines, it's likely that U.S. investors may not be willing to pay full price for any China VIEs.

Getting back to the actual company, OneConnect remains one of those high-risk but high-upside stories that are prevalent in the software space today. For reference, through the first nine months of this year, OneConnect's revenue surged an impressive 72.3%, to 1.55 billion Chinese renminbi (about $220 million), yet net losses widened by an even greater amount, plunging 81.2%, to RMB1.05 billion (about $150 million).

The losses have been due to heavy investments in research and development (R&D) and sales and marketing to onboard clients onto OneConnect's powerful tech platform. With most of OneConnect's revenue tied to client usage, these investments are necessary to get customers up and running. Once they do, OneConnect's revenue should continue to grow along with its clients, while expenses should eventually flatten out. While the net losses do present some risk, with Ping An's highly profitable business as a backstop, there aren't too many liquidity concerns here, as there were with WeWork.

Since there's a lot of pessimism around OneConnect, investors should watch tomorrow's trading and see how shares react over the coming days and weeks, as I think this could be an opportunity to pick up a high-quality technology company at a discount. Yet as always, be careful with new IPOs, as their share prices can be very volatile.