There's certainly a lot of uncertainty regarding Chinese stocks these days, but recent earning reports have shown they aren't exactly a lost cause. While it is true that the Chinese currency has depreciated against the dollar -- making Chinese company earnings worth less for U.S. investors -- several leading domestic Chinese businesses have actually been reporting stellar growth numbers lately, at least in Chinese Yuan.

These businesses aren't in the country's industrial sectors, but rather the internet and consumer sectors, as Chinese consumers appear to be picking up some of the slack in the country's maturing economy. While many U.S. investors may know the BAT stocks -- Baidu (NASDAQ:BIDU), Alibaba (NYSE:BABA), and Tencent (OTC:TCEHY) -- they may be less aware of Meituan Dianping (OTC:MPNGF), a food delivery business, local deal platform, hotel booking platform, and bike- and ride-hailing platform all rolled into one.

Meituan just went public in September of last year, and it has already surged past better-known internet giants such as Baidu and JD.com (NASDAQ:JD) in market capitalization, with the company currently valued at $56 billion. 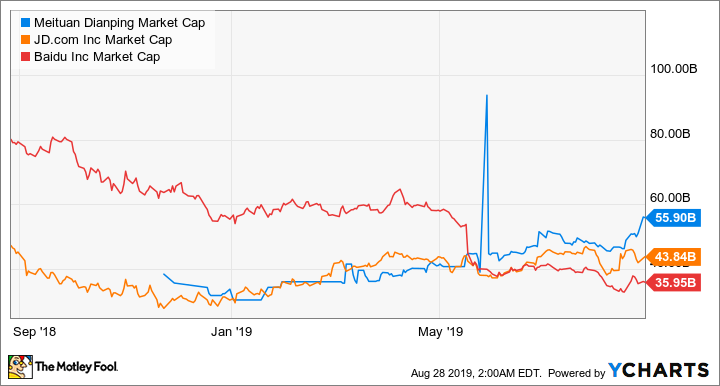 Meituan blew the doors off its earnings report last Friday and achieved its first-ever profitable quarter, a big surprise to analysts. So what's Meituan doing so right, and should you look at the stock today?

Proving you can make money on food delivery

Meituan, as expected, posted very strong revenue growth of 50.6%. This was actually a deceleration from the 90%-plus growth rate it boasted a year ago, but some deceleration is expected as the company reaches scale -- Meituan is already the undisputed leader in food delivery in China, with about 60% market share.

However, the really impressive feat was Meituan's profitability. Gross profit surged 179.5% as the overall gross margin rate nearly doubled, from 18.8% to 35%, while operating profit margins swung from negative 18.9% to positive 4.9%. The biggest contributors to profitability are the vast improvements in the company's core food delivery service, which made up 56.6% of revenue. 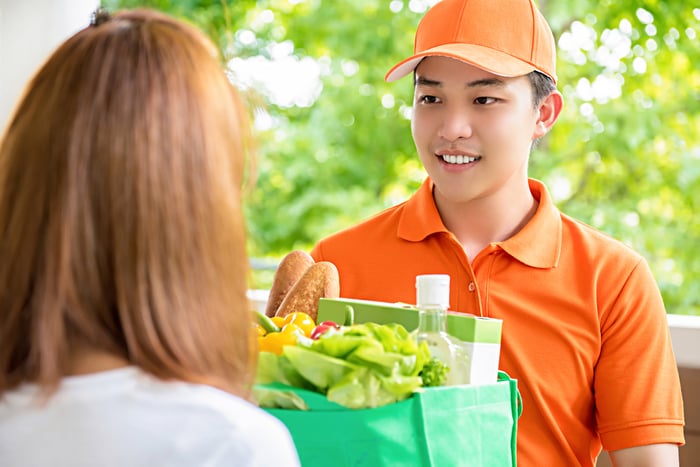 How did the company do it? It comes down to simple execution. The company achieved greater scale, delivered more orders per route, and used leading AI tools to optimize driver routes to deliver orders more efficiently.

Importantly, Meituan is also benefiting from the subscription membership program launched in the second half of 2018, which allows members additional discounts, and which Meituan can cross-sell with its daily deals page. Meituan also said that its joint promotion with Tencent Video garnered 400,000 new subscribers in June alone (Tencent is roughly a 20% owner of Meituan). Management also revealed that the average subscriber orders food three times more frequently than non-subscribers do.

Greater density along with more optimized routes allowed Meituan to drive down the cost per ride, which decreased 6% year-over-year and an even more impressive 12% quarter over quarter, due to better seasonality.

This Meituan segment, which offers store coupons as well as hotel and travel bookings and discounts, is the second-largest by revenue, and actually Meituan's most profitable, with 88% gross margins. It's also growing rapidly, with gross volumes growing 20.7%, and Meituan's monetization take rate increasing from 8.6% to 10.2%, leading to segment revenue growth of 42.8%. Businesses of all types continue to find benefit, with the number of merchants advertising on the platform growing 50% year over year.

Management pointed to the company's tech leadership and scale benefits, which set it apart from other digital advertising platforms:

Finally, even the company's much-maligned smaller businesses, which it groups into its "new initiatives and others" segment, posted stronger-than-expected results. These segments, which include bike-sharing, ride-hailing, grocery, and restaurant management tech, had actually been a point of contention with investors before Meituan's IPO, as they were perceived as perennial money-losers and a drag on profits. CEO Xing Wang had even promised to dial back investments in these segments prior to the IPO.

However, the company wasn't abandoning these segments entirely, just focusing on controlling costs and growing more efficiently. These efforts paid off last quarter, as the combined segment still grew 85.1% while increasing its gross margin from negative 76.4% in the year-ago quarter to a positive 9.1% last quarter. Management noted that it raised prices slightly for the bike segment; however, it also appears that Meituan has fully depreciated many of its bikes without replacing them, which may not be sustainable forever.

While several U.S.-based food delivery services have been struggling amid intense competition and wage pressures, it appears that Meituan's critical mass in China is showing that you can, in fact, make solid profits in the food delivery business. In addition, its merchant and hotel-booking segment is benefiting from robust network effects, and even its newer bike and ride-hailing businesses are also growing rapidly and becoming more profitable.

Of note, management revealed that it and competitor Ele.me (owned by Alibaba) only accounted for about 2% of total meals consumed in China. Thus, Meituan appears an open-ended growth story -- and while the stock has surged recently, it's only just surpassed its IPO price on the Hang Seng stock market from last September after a year-long slump. That means there could be even better things ahead for Meituan, as well as its minority owner and partner Tencent.