With a "phase one" U.S.-China trade deal about to be signed, investors may benefit from looking at China stocks. In fact, on New Year's Day, the People's Bank of China, China's central bank, revealed that it would be further stimulating the economy by allowing banks to lend more money, to the tune of $115 billion.

Many leading Chinese stocks are still well below the levels set in early 2018, just before the U.S.-China trade war erupted. Now that tensions appear to be thawing, here are three leading Chinese stocks to watch in the month of January -- two that could make for good buys and one that may be due for profit-taking after a huge 2019. 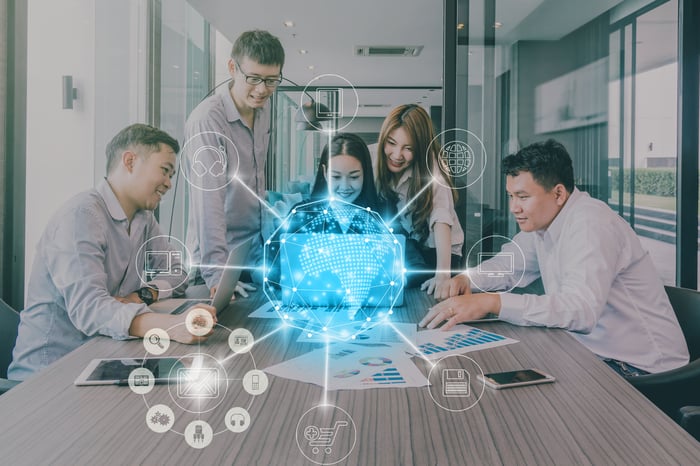 Shares of Chinese e-commerce company JD.com (NASDAQ:JD) had a terrific 2019, up over 68% on the year. However, even with this impressive surge, shares are still well below the all-time highs around $50 per share set back in early 2018.

What has investors so hopeful, despite the slowing Chinese economy? Well, 2019 brought some relief to the ongoing U.S.-China trade war, as a phase one trade deal was agreed to in December. However, JD had been on a tear even prior to the agreement, as it showed accelerating revenue growth throughout the year. Though the Chinese manufacturing sector is a bit in the dumps right now, the rising Chinese middle class is still shopping, and increasingly looking to the high-quality goods that are JD's specialty.

In 2019, JD.com also harvested the benefits of its heavy technology and real estate investments from the past few years. Margins expanded in the third quarter, as the company's third-party logistics services to outside parties increased, which benefited JD's warehouse utilization. Third parties now make up 40% of JD Logistics' capacity, up from less than 20% two years ago.

Investors should look to a number of events set for 2020. Specifically, JD.com has begun a process to explore an IPO of part of its JD Logistics platform, which is China's leading end-to-end fulfillment network. According to sources, JD is looking to raise $8 billion to $10 billion at a $30 billion valuation, which the company will use to further expand its network to stay ahead of would-be rivals such as Cainiao, the logistics platform for Alibaba.

In addition, JD.com recently launched its Jingxi platform, a social-group-buying website aimed at taking on rising competitor Pinduoduo in lower-tier and rural cities. And on the recent conference call with analysts, JD management highlighted the new technology services that it sells to "smart retail" customers, which grew at a triple-digit pace last quarter.

All in all, investors should keep an eye on JD's continued success in these newer initiatives to continue its growth and fend off competitors, and monitor the situation with JD Logistics' potential IPO as well.

Another Chinese company making waves in January is OneConnect Financial Technology (NYSE:OCFT), which just went public in December. OneConnect is one of the technology businesses incubated by insurance giant Ping An as the next-generation technology platform for all types of financial businesses in China and Southeast Asia.

Yet despite the extreme outperformance of cloud software and infrastructure companies generally, OneConnect went public with a thud, selling fewer shares than it intended, and at just half the valuation it was seeking earlier in 2019. This may have been due to valuation concerns over other money-losing technology unicorns that underperformed in 2019, plus overriding concerns over the Chinese economy.

However, as the calendar flipped to 2020, OneConnect's fortunes may be changing. This week, sell-side research analysts were allowed to begin covering the stock, and most came out with buy recommendations and price targets higher than the current price around $12.50, and much higher than the IPO price of $10. The positive coverage caused a surge in OneConnect's share price this week, though its valuation is still only about half the $8 billion valuation it had initially hoped to garner in its IPO.

In the first nine months of 2019, OneConnect grew revenues by 72%, but it's still trading at lower price-to-sales levels than other U.S.-based software platforms that aren't growing as fast. This may have to do with the growing net losses the business is generating as it invests in future technology, but with the highly profitable Ping An as a backer, the company can afford losses for a period of time as it widens its moat against rivals.

Do you know what the best-performing large-cap China internet stock was over the past 12 months? It may be a company you've never heard of, and it operates in a category you might not think would lend itself to extreme outperformance. But that's what investors got in Meituan Dianping (OTC:MPNGF) over the past year. 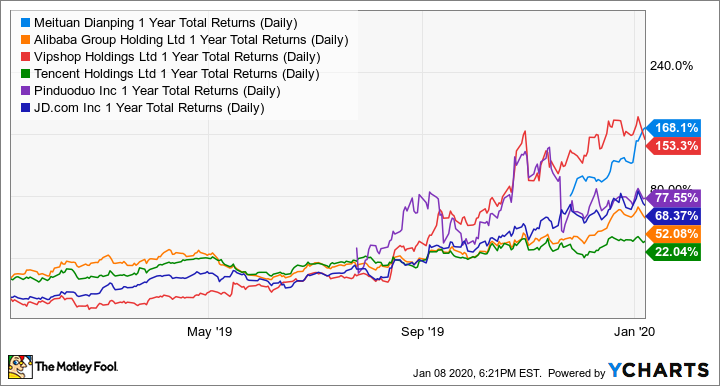 In the third quarter, Meituan grew revenue by a stunning 44.1%, with strength across its food delivery business, its hotel and travel bookings segment, as well as its new initiatives, which include bike-sharing, restaurant technology software, and grocery delivery businesses. Even more impressive, profitability flipped from an adjusted net loss of RMB 2.5 billion to an adjusted net profit of RMB 1.9 billion.

Meituan has been able to flex its scale and data advantage to spur more impulse ordering from its customers, while also more efficiently routing its delivery drivers, leading to a virtuous circle of revenue growth and better margins. Food delivery transactions grew 38.1% on top of just 14% customer growth, meaning customers are finding increasing value and convenience in Meituan's services. Importantly, all that increased traffic paves the way for more advertising revenues and cross-selling opportunities on Meituan's site and app.

Despite this impressive performance, with Meituan at an $80 billion market cap, the market is clearly pricing in a lot more good news. Last quarter's adjusted net profits only equated to about $270 million, which annualizes to just over $1 billion. That means the market is valuing the company at over 74 times earnings.

Therefore, while Meituan is an exciting story, investors should monitor if it can continue to generate the operating leverage and profit growth necessary to justify such a valuation. It may be time to take profits in this name and look at some of the relative underperformers in China, such as the other two names above, or even the large tech giant that itself owns a large stake in Meituan.