In general, 2019 has mostly been a good year for China stocks. After the index fell over the course of 2018 because of the U.S.-China trade war, the Chinese market recovered somewhat in 2019, as both the U.S. and China stimulated their domestic economies. And eventually, after several false starts, the U.S. and China finally agreed to a preliminary trade deal in principle last week, ending the year on what looks to be a high note. That sent the S&P 500 up 28.7%, U.S. technology stocks up an even greater 35.1%, and the Chinese technology stocks -- as represented by the internet-focused  KWEB (NYSEMKT:KWEB) exchange-traded fund -- up a respectable 26.1%.

Yet Tencent Holdings (OTC:TCEHY), arguably the best technology stock in China, or even the world -- which I recommended as a holiday gift last year -- has lagged the market in 2019, up only 16.5%. This a surprising result, given the company's deep competitive advantages and exposure to several high-growth industries, such as video games, online advertising, digital payments, and cloud computing. After a large decline in 2018, I would've expected more out of Tencent's recovery.

Looking back, here's why this internet giant lagged the market in 2019, but why it still remains an excellent long-term pick. 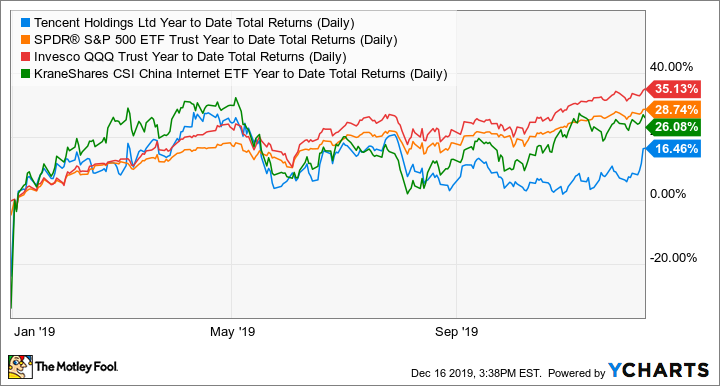 Lagging its peers -- even the ones it owns

What's curious is that while Tencent had an underwhelming 2019, many of its fellow Chinese internet peers excelled, despite the overhang of the trade war. Why is that? 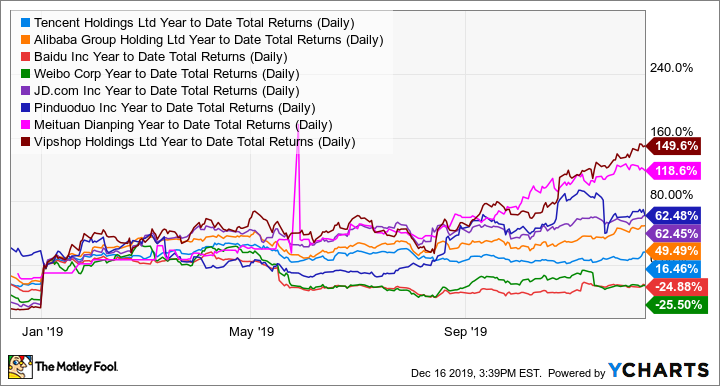 Except for laggards Baidu (NASDAQ:BIDU) and Weibo (NASDAQ:WB) – both of which depend heavily on online advertising for revenue -- Tencent has lagged virtually every other large Chinese internet company, especially those involved in e-commerce.

Despite the overhang of the trade war, it appears the Chinese consumer is still buying lots of goods and services, and buying more of it online. Unfortunately, several Chinese industries pulled back on their advertising spend this year, especially for big-ticket items such as automobiles. That led to a slowdown in online advertising demand, just as the Chinese market was hit by a surge of ad supply from short-video app TikTok, the hugely popular app from rising star ByteDance.

What's especially interesting about Tencent's underperformance is that it's a large investor in many of the stocks that have rocketed higher in 2019. Tencent owns roughly 18% of JD.com (NASDAQ:JD), which is up 62.5% on the year; 17% of Pinduoduo (NASDAQ:PDD), also up 62.5%; 20% of food delivery and local deals super-app Meituan-Dianping (OTC:MPNGF), up a stunning 119%; and 7% of VipShop (NYSE:VIPS), which has done best of all, up 150% on the year.

In fact, just through the first nine months of 2019, Tencent's investment portfolio in listed companies increased from $34.7 billion to $49.9 billion, a 43.8% increase.  Not only that, but many of Tencent's holdings have also gone much higher in the fourth quarter, meaning Tencent's investment portfolio could be up some 50% on the year, while Tencent's own stock is up only 16.5%, including dividends. In other words, Tencent appears to have done much better as an investor in 2019 than it did as a business. 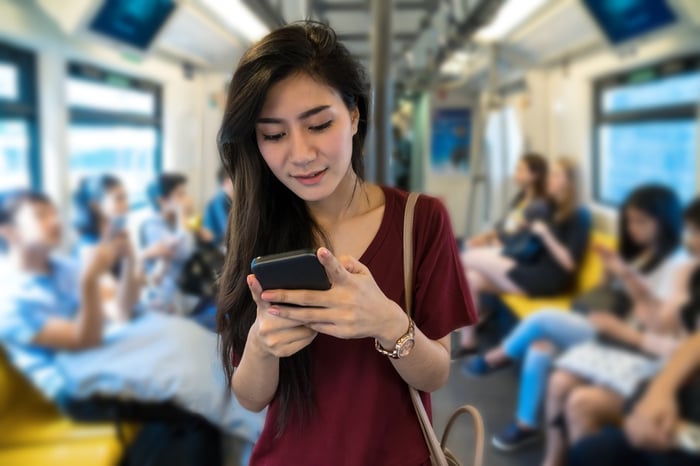 Twin disasters: a video game ban and one errant tweet

What are the reasons for Tencent's middling performance, in spite of its investment success? Chalk it up to some bad luck. Tencent has had several adverse events happen over the past two years. Just when the company seemed to get past one speed bump, another popped up.

In 2018, the Chinese government halted all new video game approvals, effectively preventing Tencent's largest individual revenue driver -- its massive online gaming franchise -- from growing. This was due to concerns over video game addiction and health concerns among China's youth. Though gaming regulators began approving games once again in December 2018, it then asked video game companies to stop submitting new applications to give it time to clear the massive backlog. Then in April 2019, many game companies were forced to reapply and submit additional material to comply with anti-addiction policy, further delaying the rollout of new games. It's estimated that regulators will approve only 2,000 to 3,000 games this year, down from 9,651 approvals in 2017.

Just when Tencent's online gaming momentum was picking up, the company found itself in the midst of a new controversy surrounding its status as the exclusive streaming distributor of the NBA in China. Tencent recently renewed its contract with the NBA for five years at $1.5 billion and found itself in a pickle when Houston Rockets general manager tweeted his support for Hong Kong protestors back in October.

China immediately stopped showing all NBA games on broadcast TV. For its part, Tencent has limited its NBA streams but hasn't aired any Houston Rockets games, despite its being one of the most popular teams in the country, with arguably the NBA's biggest star in James Harden. With another five years remaining on the contract and the uncertainty around the NBA in China continuing, the high-profile controversy was another hit to sentiment for Tencent's stock.

Still, online video advertising makes up a relatively small portion of Tencent's revenue -- just 3.5% in the recent third quarter. As such, this too may have been an overreaction on investors' part.

With all of these headwinds, Tencent's stock still remains about 24% below its all-time highs set back in early 2018, in spite of its relatively modest 16.5% rise this year. 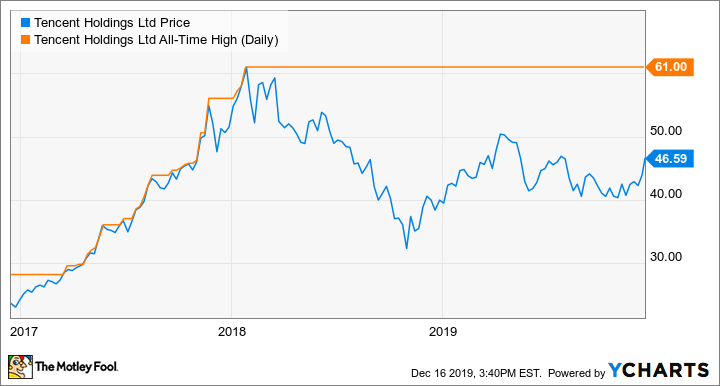 Yet with its online games division set to resume growth, and other large parts of Tencent's empire, such as fintech and cloud and social media advertising, growing at 36% and 32%, respectively,  Tencent's stock seems poised for a much better 2020 than its 2019. Who knows -- the stock may even outpace its world-beating investment portfolio in the new year.