Disney has an opportunity to flex its content muscles, demonstrate its pricing power in its theme parks, and do more of what it does best in producing new media content.

The introduction of its streaming service is a game-changer for Disney ( DIS 2.56% ). Early reports say Disney+ had 10 million signups on the first day, though this includes the seven-day free trial, so it's not a measure of how many people are paying customers. The cash flow from that amount of subscriptions could reach $700 million annually. The intense demand right out the gate highlights the enthusiasm for a direct-to-consumer offering from Disney.

Disney stock is up 32.76% for the year compared with the S&P 500, which is up 24.32%. The market is giving credit to its ability to adapt to changes in consumer tastes. Here are the three reasons why Disney is a long-term buy and hold.

1. The ability to monetize its intellectual property

Disney has a treasure trove of assets in its vault. It has been producing high-quality content for nearly a century. No other studio has the kind of success Disney has in theatrical releases. Disney has a streak of eight straight years of the top-selling movie at the box office, the highest gross sales for the period from 1995 to 2019, and the highest average gross sales per film. 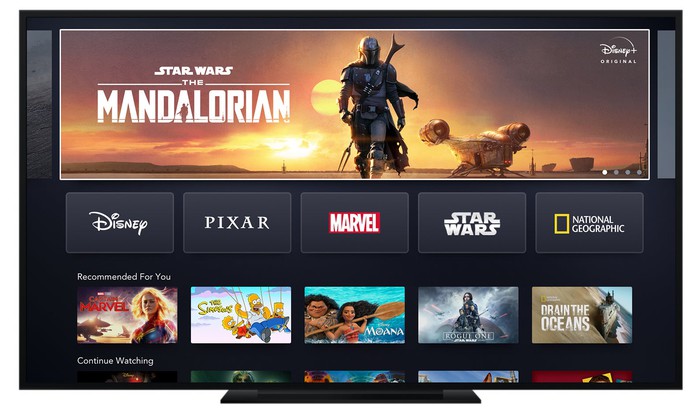 In addition to producing fantastic content, it has an excellent eye for purchasing it. Its acquisitions of Marvel Studios for $4 billion in 2009, LucasFilm for $4 billion in 2012, and Pixar for $7.4 billion in 2006, are proving to be significant bargains. The value of its Fox Studios acquisition that closed in March 2019 for $71.4 billion is yet to be seen, but if the past is any indicator of the future, it will prove to be another great deal for Disney. At a time where costs for original programming are experiencing rapid increases, Disney has the luxury of a massive collection of movies and TV shows.

2. Its pricing power at its theme parks and resorts

Disney theme parks have a unique ability to bring families together and create memorable experiences. The breathtaking moments children remember from visiting a Disney park establishes a connection with the brand and its characters that last a lifetime. And that positive relationship is typically passed on to the next generation.

In Q4, Disney reported an 8% increase in revenues from its theme parks and resorts segment, even as it increased ticket prices again at its theme parks worldwide, as it has done every year since 2015. A single-day ticket to visit one of its parks for the busiest time of year now costs $159 per adult, up from $139 per adult. A decrease in attendance at the parks due to the price increases was offset by increased spending per visitor. Parks, experiences, and products are still its most significant segment, generating slightly more revenue than its media networks segment.

The number one complaint about Disney's theme parks is the long wait time to see attractions. The introduction of dynamic pricing, which raises prices on popular days and lowers prices on unpopular days, will allow it to improve the customer experience while pushing revenues higher. Management said, 'at Parks, our strategy of managing yield to drive greater profitability and enhance the guest experience continues to pay off.' This strategy first started with seasonal tiered pricing in 2016. Then in October 2018, date-based pricing began.

Creating its direct-to-consumer streaming service gives Disney an additional avenue to monetize its media library. Given that it already holds a definite competitive advantage in content creation, an extra layer of revenue-generating ability strengthens that advantage. Disney can release a movie in theatres, then move it onto Disney+, and finally air it on ABC.

Although Disney shares are up 32.76% year to date, it still has room to run. It is barely at the beginning of capturing market share in streaming TV, its theme parks will be a source of cash flow for the long-term as it has no imminent threat, and it will continue to produce quality content as it has for decades.

Its P/E ratio of 21.79 and its PEG ratio of 3.63 may seem like its a costly price to pay, but the addition of Disney+ justifies this premium. For comparison, Netflix ( NFLX 0.47% ) has a P/E ratio of 97.4 and a PEG ratio of 4.4. As the number of Disney+ subscribers grows, and a more significant portion of its revenues come from streaming services, its stock price will sell for a P/E multiple closer to that of Netflix.

It's an excellent time to start accumulating Disney shares and build on that position as positive news about streaming subscribers are released.