Please ensure Javascript is enabled for purposes of website accessibility
Free Article Join Over 1 Million Premium Members And Get More In-Depth Stock Guidance and Research
By Daniel Foelber - Nov 21, 2019 at 8:45AM

One of these companies has some serious upside for 2020.

Like other integrated oil and gas companies, ExxonMobil and BP are coming to terms with the new reality of $50 to $70 oil. Unlike in past cycles, oil prices are likely to remain somewhat low as a result of the U.S. shale revolution, which has sparked a supply increase more than capable of keeping up with global demand.  ExxonMobil and BP are similar in some respects, but one has superior upside for 2020 and beyond.

A game of margins 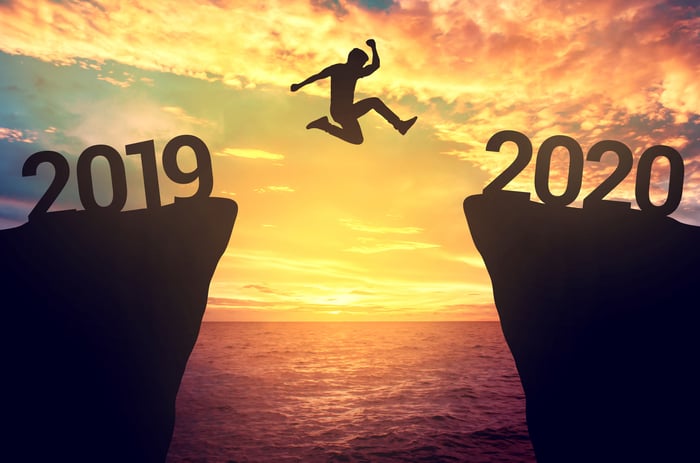 Despite the low margins, downstream is one of Exxon's main competitive advantages, so it's no surprise that the company is positioning itself for a favorable future after "IMO 2020" goes into effect Jan.1. IMO 2020 is the unofficial name given to the International Maritime Organization's long-anticipated regulatory reduction in sulfur emissions. IMO 2020 is a big deal for shippers, commodity traders, refiners, and investors because it opens new markets for alternative bunker fuel sources. Clean-burning distillates, such as diesel, will be combined with high-sulfur fuel oil (used in commercial ships) to produce low or very low sulfur emitting fuels.

Exxon has the second-largest refining capacity in the world and the largest coking capacity of any supermajor. Coker units thermally crack the long hydrocarbon chains embedded in the residual oil of a distillation column and turn it into usable products like light and heavy gas oils and naphtha. Exxon's heavy investment in the Permian Basin , the largest U.S. shale play, has contributed to the current performance and projected growth of Exxon's upstream business, but the benefits extend to the company's downstream business as well. That's because Permian Basin crude is light and sweet, meaning it needs less refining to produce valuable ultra-low sulfur diesel.

In response to a question on IMO 2020 during an August quarterly conference call, Senior Vice President Neil A. Chapman said:

Exxon's growth in light sweet crude oil from its upstream business pairs nicely with a downstream market that will demand lower-sulfur solutions for the shipping industry. "We've been planning for this for a long, long time," said Chapman. "The market will do what the market will do. ... but directionally we feel like ... we sit in a very strong and [advantaged] position."

According to BP CFO Brian Gilvary, BP got "back into balance at $50 a barrel about two and a half years ago." The company's strategy is straightforward: be able to breakeven when oil is $50 a barrel or lower and then use the surplus cash to pay down debt, buy back shares, and pay the company's dividend. But the vast majority of BP's earnings, like Exxon's, come from the company's upstream portfolio, where earnings have declined by nearly 50% since the third quarter of 2018.

One reason for this decline is BP's reliance on offshore investment and lack of exposure to the U.S. shale revolution. Despite having a consistent downstream portfolio and "good downstream result[s] supported by oil trading"for the third quarter of 2019, as Gilvary said in the CNBC interview, BP has been unable to replace the gaping hole in earnings that upstream used to provide, raising the question of if its dividend is sustainable.

Although BP was able to stabilize debt in Q3, keeping it flat quarter over quarter, it's hard for the company to pay down debt, let alone take on more, when its dividend is outpacing earnings. ExxonMobil finds itself in a similar problematic position, with a trailing-12-month payout ratio that was about 80% before Q3 earnings but now sits close to 100%.

There's no hiding the fact that ExxonMobil and BP are still adjusting to the current low-oil-price environment. That being said, Exxon's onshore upstream portfolio pairs nicely with its downstream portfolio to position the company well for 2020. Investors should consider waiting to see just how much Exxon will benefit as IMO 2020 goes into effect. As for BP, the company is trying to position itself to deal with $50 oil, which is already a challenge, while simultaneously buying back shares and paying a large dividend. In essence, BP is making a lot of promises at once, all of which require money. BP could end up straining itself as it tries to balance rewarding shareholders while also growing the business.