The lock-up period for Uber Technologies (NYSE:UBER) is over, and insiders are starting to bail. This month, Travis Kalanick, the founder and former CEO, dumped about 20% of his stake in Uber shortly after he, as an insider, was legally permitted by SEC regulations to do so.

Kalanick sold 20.3 million shares worth about $547 million that were held in a trust, according to an SEC regulatory filing. Additionally, he sold another $164 million worth of stock between November 11 and November 13. These huge trades were just a few of several large blocks of Uber stock sold, pushing the share price to an all-time low. Facing one quarterly loss after another with no reversal in sight, Uber stock has fallen more than 30% since its IPO last May.

The trigger for the sharp drop in pricing was not specifically the sale of shares by Kalanick, nor the most recent whopping quarterly loss of $8 billion. Instead, investors have fallen out of favor with high growth companies like Uber that don't generate earnings and are unlikely to earn money anytime soon. 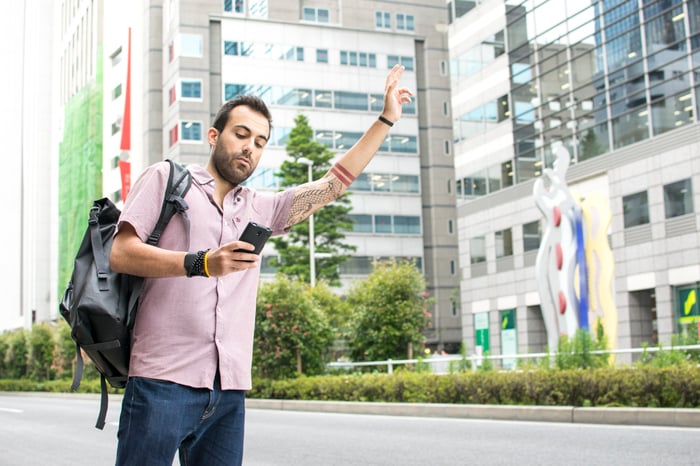 Great technology, but where's the money?

Much of Uber's rapid growth and success has been due to massive investments from institutional investors enamored by the tech sector. In Uber's case, the initial investors included the Silicon Valley venture firm Benchmark Capital and Toyota Motors, as well as the Saudi Arabia Public Investment Fund, one of the world's largest sovereign wealth funds. These are the types of long-term investors that are impressed by big bets on ideas that may or may not pay off in the decade ahead.

No doubt, Uber has sunk billions into development costs to create a new era of convenience and affordability in personal transport. Top-line revenues hit $3.81 billion in the most recent quarter, up nearly 30% from the $2.94 billion in sales the year before. Uber is the dominant ride-hailing service in almost every urban market across the globe and is also investing aggressively to diversify into a B2B logistics business, Uber Freight, as well as a restaurant delivery service, Uber Eats.

But all that is old news... and it's already baked into the price.

Uber has a lot to prove

Today, we are in a "show me the money" stock market. It is bottom-line earnings and EPS growth that drives share price. Big tech ideas that do not deliver earnings won't cut it anymore.

In the short run, the sharp fall of Uber shares may have left them oversold, possibly presenting a tactical trading opportunity for speculative investors. Now that the lock-up period is over, it may take some weeks for insiders to cash in and the oversupply of stock to be absorbed.

"Many are going to wait for the smoke to clear, and once that happens it'll be all clear to buy Uber," Daniel Ives, an analyst of Los Angeles-based Wedbush Securities, told the Wall Street Journal, "I think you are going to look back at this as a trough in the stock."

Apart from speculative trading, the longer-term outlook for Uber is tepid at best. It may not be until late 2020 or 2021 before the company turns the corner and starts delivering significant earnings. In the meantime, there are plenty of great tech stocks in the market that should be considered a good buy. They can deliver earnings results today, next week and next quarter. For the rest of this year, Uber does not rank as one of those good buys.