Stock investors attempting to play a J.C. Penney (OTC:JCPN.Q) comeback would really be betting against the odds. There is some enthusiasm on the street right now after the retailer pulled together some better-than-expected third-quarter results last week. But I'm not sure a pleasant surprise on some financial metrics really matters if your revenue still declines by 8.5% year over year.

The stock price has been around the $1 mark for a while now. At that level, J.C. Penney has flirted with being delisted from the NYSE. Its "better"-than-expected third-quarter losses have given shares enough momentum to seemingly move away from that danger for the moment, but the company's still in trouble. 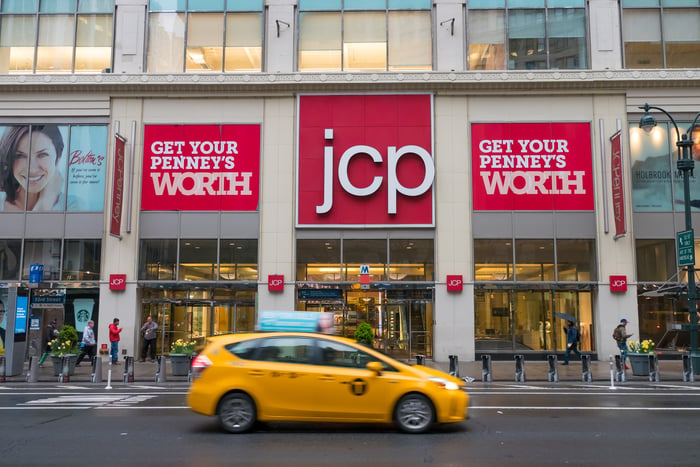 The third quarter showed that J.C. Penney is making progress toward stopping the bleeding, but its growth engine is still in decline. Comparable-store sales declined by 9.3% year over year. Adjusted comparable-store sales (which exclude the impact of the company’s exit from major appliance and in-store furniture categories) decreased by 6.6% in the quarter. Through the first nine months of the year, comp sales are down 8% compared to a decrease of 1.7% in 2018. You can improve efficiencies any way you want, but without top-line growth, the potential of a business is bleak.

J.C. Penney's attempts to renew interest in stores through the integration of activities such as bars, cafes, and even fitness studios into locations does seem like something new, but one has to question the big-picture impact. Will adding nonclothing-related activities to JCPenney stores lead to a meaningful increase in the core business? The idea certainly has merit, as current department store setups are not cutting it, but the retailer doesn't have lots of time to fix this issue.

The health of J.C. Penney's balance sheet has deteriorated since this time last year. Total shareholder equity has dropped a little over 19% during that time to $868 million. The fact that the company's market capitalization is well below that, at around $360 million dependent on the day, is one of the few redeeming virtues here.

Cash and cash equivalents on hand at the end of Q3 were $157 million. The company seems to be managing an adequate cash position on its balance sheet by relying on credit facilities. Through the first nine months of 2019, J.C. Penney has borrowed $1.83 billion under its credit facility and made payments of almost $1.4 billion. In its earnings release, management noted that overall liquidity is expected to be $1.5 billion through the end of the year.

Overall free cash flow was negative $518 million through the first nine months of the year. Company guidance suggests that the holiday quarter will be strong, as it expects full-year cash flow to be positive. Full-year comparable-store sales are expected to be down 7% to 8%. Since comp sales are already down 8% through the first nine months, this doesn't imply much confidence in big growth rates in the fourth quarter.

Broader competition adds to the struggle

J.C. Penney seems like the weakest link in a crowded field. The retail landscape is simply savage right now. Every business is facing the pricing/digital competition of e-commerce competitors like Amazon. At the same time, traditionally brick-and-mortar businesses are competing with each other. Macy's is in a much better situation financially and still has struggled to revive sales.

Overall, the brick-and-mortar names that seem to be doing OK offer diverse products and don't follow the department store model. Retailers like Target are succeeding in driving same-store sales. More clothing-focused names like J.C. Penney that are largely tied to malls have a much tougher road ahead. Renovating stores, adding cafes and yoga, or whatever it tries to do, will cost money and time. J.C. Penney doesn't have a ton of either.

J.C. Penney's situation is tough -- you have a primarily brick-and-mortar retailer that's very reliant on the department store model and needs to invest a lot of time and money into creating a new draw to its stores that will generate foot traffic and sales. With $4 billion in long-term debt, J.C. Penney doesn't have much wiggle room. It doesn't seem to be a stock worth investing in right now.