General Motors (NYSE:GM) announced on Wednesday that it has filed a federal racketeering lawsuit against Fiat Chrysler Automobiles (NYSE:FCAU).

The suit alleges that FCA bribed senior officials of the United Auto Workers labor union (UAW) in order to secure special benefits -- and to manipulate labor negotiations in hopes of pressuring GM to accept a merger proposal by increasing its costs.

This is an unusual case that has the potential to become a big deal, one that could cost FCA a billion dollars or more to resolve. Here's what GM and FCA investors need to know. GM is alleging that FCA bribed union officials to try to pressure GM into a merger. Image source: General Motors.

What this is all about: Bribing UAW officials

Before we dig into the suit itself, there are a few things to know by way of background.

First, this case didn't come out of thin air. It's related to an ongoing federal criminal investigation into dealings between several former UAW leaders and FCA executives. So far, 13 people have been charged with crimes related to a years-long effort in which FCA paid at least $1.5 million in bribes to UAW officials in exchange for a series of benefits. So far, four former UAW officials and three FCA executives have pleaded guilty, and the UAW has conducted an extensive shake-up of its leadership.

Second, the UAW's labor agreements with the Detroit Three automakers are renegotiated every four years, usually in the fall. The 2011 and 2015 negotiations occurred while this bribery effort was ongoing.

Third, former FCA CEO Sergio Marchionne made repeated attempts to convince GM to agree to a merger with FCA, most notably in mid-2015. 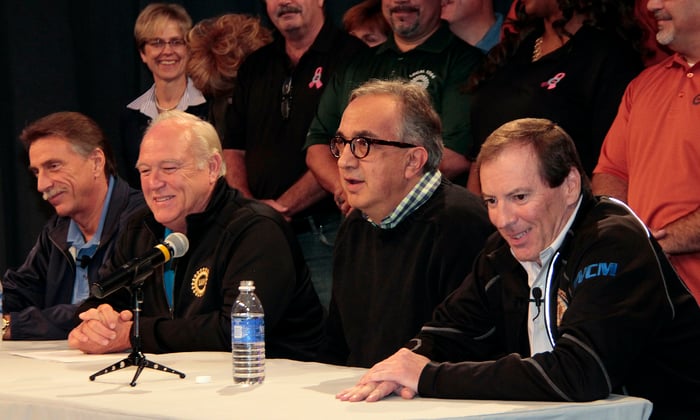 Now let's turn to the lawsuit. GM's complaint alleges that:

GM's complaint makes clear that the company won't hold the UAW responsible for any of this and that it isn't seeking to alter past labor agreements or reduce its workers' wages or benefits. In fact, the complaint praises the UAW for its ongoing ethics-reform effort, contrasting it with FCA's lack of action (and its continuing celebration of the now-deceased Marchionne).

The complaint also promises that GM will reinvest any damages recovered in this case in the United States "for the benefit of its employees."

How bad is this for FCA?

It could be very bad. For starters, the damages -- or settlement -- could easily run into the billions. It's important to note that under the RICO statutes, damages can be tripled: If GM can show $2 billion of damage, for instance, FCA might have to pay $6 billion.

More urgently, the timing of this is almost exquisitely bad for FCA. Not only is FCA in the midst of merger discussions with French automaker Peugeot SA (OTC:PUGOY), it's also about to begin its own contract negotiations with the UAW. (Both GM and Ford Motor have completed their agreements with the UAW.)

It's a safe bet that GM timed this to put maximum pressure on FCA to settle. While an FCA spokesperson said on Thursday that discussions with Peugeot are "progressing smoothly" despite the filing, CEO Mike Manley said in a letter to employees that he assumes the suit was intended to "disrupt our proposed merger."

The timing suggests that GM might be seeking a relatively quick settlement before the FCA-Peugeot merger is completed. How much will FCA have to pay to make this go away? We could find out soon.