Pet insurance is rapidly growing, but is still in its infancy in North America.

Trupanion ( TRUP -6.47% ) is a rapidly growing provider of pet insurance for dogs and cats in the U.S., Canada, and Puerto Rico. The company's third-quarter earnings report from early November showed its total number of insured pets grew 23% year over year to reach 613,694. That is almost five times the number it had at the end of 2012.

Despite that impressive growth, Trupanion has enrolled only about 0.4% of the dogs and cats in North America and is only scratching the surface of its long-term opportunity. It could be multiples of its current size over the long term.

According to the North American Pet Health Insurance Association (NAPHIA), the number of insured pets in North America grew 17.1% to 2.43 million last year. It's estimated that there are about 151.7 million dogs and cats in North America, which means less than 2% of dogs and cats are insured. To consider where things could go over the long term, we can look to certain European markets for precedent.

According to the Association of British Insurers (ABI), there are 4.1 million dogs and cats insured in the U.K., which is about 25% of the dog and cat population. Sweden is the world leader in pet insurance penetration with a penetration rate estimated to be higher than 50%, which includes an estimated 90% of dogs and 50% of cats. Some other markets are estimated to be in the 5% to 15% range. 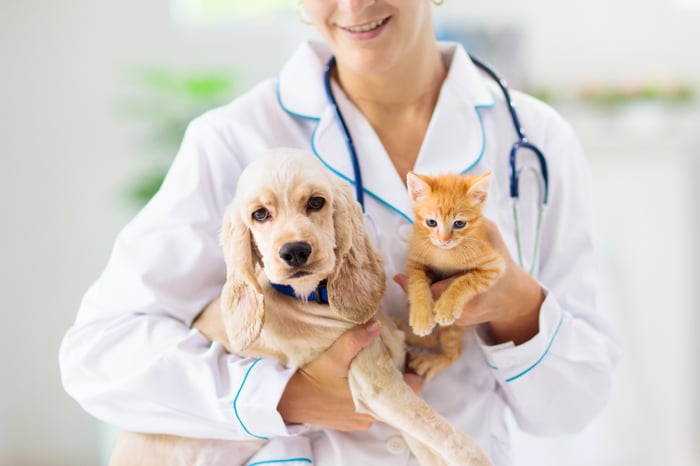 Why pet insurance is less popular -- for now -- in North America

Pet insurance is more popular elsewhere because those markets have had higher-quality pet insurance products for decades. In fact, it is believed that the first policy was written in Sweden almost a century ago. The U.S. penetration rate is so low in comparison because pet insurance started later and was a lower-quality product that did not catch on with veterinarians and pet owners.

These lower-quality insurance products failed to gain traction because pet owners were often disappointed that the policies did not cover congenital or hereditary conditions, had limits on what they would pay out, and often reimbursed based off fee schedules that showed a lower price than what the vet was charging.

For example, imagine the pet owner who gets an invoice for Fluffy's ACL surgery for $4,000 and later learns the insurer's fee schedule dictates that it reimburses based on a $1,500 cost for that procedure. In cases like these, pet owners would get reimbursed for only a fraction of their out-of-pocket costs and likely feel that the veterinarian was overcharging for a procedure that should only cost $1,500. Neither pet owners nor veterinarians got behind these products.

But perceptions of pet insurance are slowly improving. Trupanion launched in Canada in 2000 and in the U.S. in 2008, essentially bringing the higher-quality insurance product from Europe to North America. Trupanion aims to be transparent, covers 90% of the vet's actual invoice, covers all congenital and hereditary conditions, and has no caps or limits on payouts if the customer has purchased an appropriate plan. Trupanion can even pay the vet directly through its software at an increasing number of vet hospitals, which eliminates the need for pet owners to file for reimbursement.

Since Trupanion has proven that more comprehensive pet insurance can work in the United States and Canada, new competition continues to emerge. Investors will need to keep an eye on how the market -- and Trupanion's place in it -- shape up.

Why Trupanion Was Down 15% in January

Why Trupanion Stock Gained 14.3% in February