Last week, Weight Watchers International rolled out myWW, offering members a customized approach to weight management. But will its new program and its rebranding effort help it recover from slimmer third-quarter revenue results?

Last week -- just in time for the holiday heavy-eating season -- Weight Watchers International ( WW 2.42% ) rolled out its new, customized weight management program called myWW. It's the earliest the company has ever launched a new program, according to CEO Mindy Grossman. The debut date is more than seven weeks before New Year's, when folks make resolutions that often include weight loss goals. The post-holiday diet season drives WW International's highest subscriber rates, which usually decline through the rest of the year. The myWW plan program matches members to one of three plans based on taste preferences, eating habits, and goals. Gary Foster, WW's chief scientific officer, says myWW took about two years to develop, and it builds on science and behavioral data.

Wall Street analysts say the program will be a key driver of future subscriber growth. Keybanc's Edward Yuma said myWW is "unique enough to feel new," but also carries elements of the old program, including the concepts of SmartPoints and ZeroPoints. "This customization of the ZeroPoints list offers more flexibility from the existing, and arguable more restrictive, Freestyle program," said Yuma. 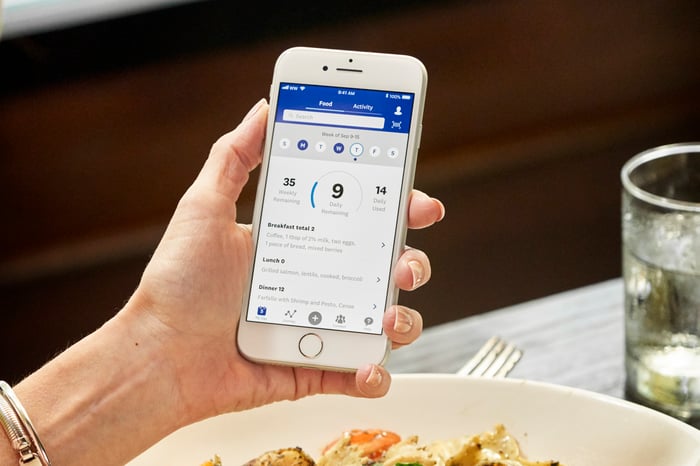 WW International board member Oprah Winfrey is doing her part to help. She'll tour the U.S. in early 2020 to share her "health journey" talk about healthy living, and conduct interviews with celebrities about their health. Grossman said ticket sales are "tremendously strong" for the tour, called WW Presents Oprah's 2020 Vision: Your Life in Focus.

In September 2018, WW introduced a rebranding effort, including ditching the more than 50-year-old Weight Watchers name. CEO Grossman said the WW identity was more in tune with the modern era because the mindset of "dieting" has been replaced by a more holistic approach to health and wellness. The rebrand made sense; while the global wellness industry surpassed $4 trillion a year, Weight Watchers was struggling. But marketing analyst Avi Dan calls the marketing of the rebrand "unconvincing." He points to problems with everything from its unfocused messaging to its choice of Kate Hudson as brand ambassador. Even the choice of the acronym was controversial since the double "W" is a difficult set of initials to pronounce.

WW also has faced recent backlash because of its new weight loss app for kids, Kurbo. Health experts warn it could promote adolescents to develop unhealthy relationships with food and dieting. In fact, an online petition calling on the company to remove the app has garnered more than 87,000 signatures. WW has not yielded to these demands from parents, nutritionists, and other experts, and Grossman said the backlash "strengthened our resolve and made us offensive." WW contends that the app is a healthy, scientifically-backed program to help overweight children.

The company hopes that myWW, the Oprah tour, and its rebranding will help it recover from some of its more disappointing third-quarter numbers. On Nov. 4, WW reported revenue of $348.6 million, 4.7% lower compared to the prior year. The company posted earnings per share of $0.68, below the prior year's $1.00 per share. Subscribers totaled 4.4 million at third quarter's end, lower than 4.6 million at the end of the second quarter. The day after reporting results, its shares briefly dropped as much as 21% lower. In the first half of 2019, shares of WW stock fell 50.5%. Much of the company's decline came in late February when the stock sank almost 35% in a single day after WW reported disappointing fourth-quarter 2018 results. But it has since started to recover. In the second quarter of 2019, the company boasted strong subscriber growth, helped by celebrity endorsements, new technology -- a partnership with Aaptiv, a physical activity tracker -- and expansion in global markets, including Germany, the U.K., and Australia.

WW faces competition from a growing wellness industry, and that competition worries some investors. Shares of WW dropped 10% Oct. 2, after Novo Nordisk ( NVO 2.05% ) announced a deal with privately-held app-based rival Noom,  though shares recovered quickly. The companies will develop programs to "help people with obesity achieve and maintain weight loss." Noom says 45 million people use its weight-loss app and personalized meal-planning service. Apps like Noom are gaining ground because they are less expensive than commercial programs like WW, and they appeal to a younger demographic. In May, Noom raised an additional $58 million of funding, led by Sequoia Capital, which it plans to use for improving the customer experience. The two services have comparable prices, varying depending on if a person is signing up for the first time or is already a subscriber.

For its part, Grossman said on the third-quarter earnings call that WW is "acutely aware of who that competition is and what they're doing" and that WW is working to "differentiate what we can do." In July, WW's stock gained 10% on the news that JPMorgan upgraded its rating on the stock to "neutral" from "underweight." JPMorgan Chase analysts pointed to stabilization of subscriber trends in the first half of 2019 and the launch of myWW, which it expects to boost subscriptions and earnings growth.

In the days following WW's third-quarter report, the company's shares recovered additional lost ground and gained even more. In fact, on Nov. 19, it closed at $40.41, its best all year. That surge is impressive. And WW's price-to-earnings-growth (PEG) is -2.85, suggesting it could be a good stock for investors looking for growth.

Investors with interest in the global health industry would do well to keep a close eye on WW International in 2020. It could be a health stock that's getting healthier in the New Year.

Here Are the Winners of Cowen's Big Pharma R&D Showdown