In 2007, one-in-five Americans reported losing some sleep when considering how to pay for college. Ten years later, that figure jumped to more than one-in-three. It's not hard to see why: The sticker prices for secondary education have ballooned.

If you've got more than five years to let your money grow, however, you can calm those nerves by learning how to invest in the stock market. That's what I've done. And below, I'll call out three companies that I've invested in for my family's educational future.

All three are leading industries that I believe will be even more important come 2025: Mercadolibre (NASDAQ:MELI) in Latin American commerce, Axon Enterprise (NASDAQ:AXON) in law enforcement accountability, and Okta (NASDAQ:OKTA) in online security. 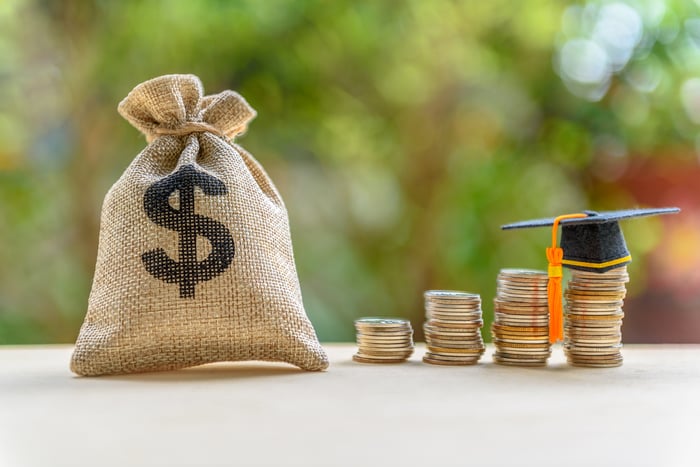 A force in Latin America

When it got its start, Mercadolibre was aiming to form an online marketplace for Latin American countries. Today, it is the runaway leader in that category, with a total of $13.4 billion worth of products sold on its marketplace.

But a funny thing happened along the way: Because so many of the continent's residents are under-banked, it created its own digital payment system to make it easier to buy stuff on its website. That payment system, Mercado Pago, has become wildly popular. In 2014, it processed $3.5 billion in payments. Today that figure has increased seven-fold to $25 billion. It is becoming such an ingrained part of life in Latin America that payments for things like gas and groceries -- which have nothing to do with Mercadolibre's marketplace -- outpace the payment system's use on the company's website. 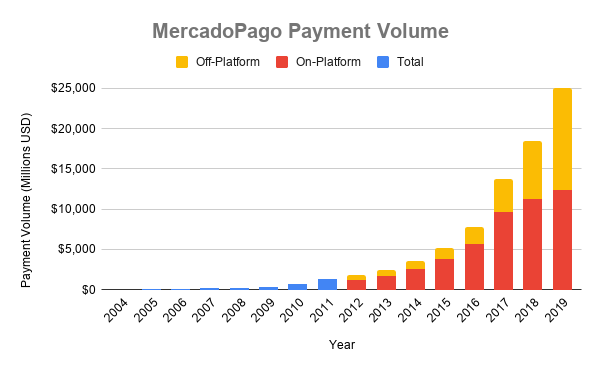 So that gives you a company in Latin America that's part online marketplace (like Amazon in America) and part payment platform (like PayPal). But the total market cap for the company is $25 billion. Amazon and PayPal combined are worth almost 40 times more. I'm not saying Mercadolibre will -- or should -- ever be worth that much, but it gives you an idea of how much room it still has to grow.

Like Mercadolibre with Mercado Pago, Axon Enterprise has had an impressive second act. For the first two decades as a company, it was primarily focused on stun guns for police departments. That's why it used to be known as TASER International.

But over the past five years, body cameras have become its primary focus. In fact, it's not just body cameras, but the system that stores and analyzes all of that footage: Evidence.com. When a police department starts storing and analyzing all of its data on the platform, switching costs become very high. Who would want to risk losing data, pay for a migration of all that footage, or have to retrain an entire police force on a new system?

And as you can see, Axon has had no problem getting departments to sign on. 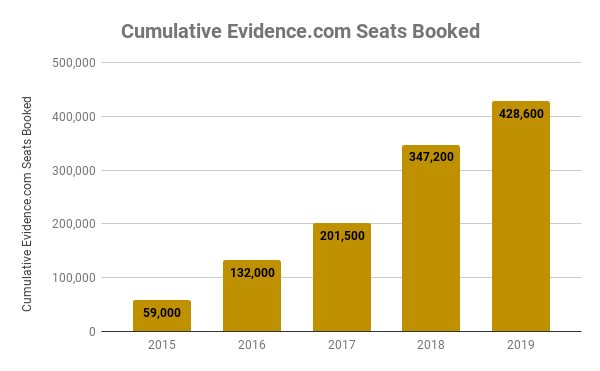 It's worth noting that those 2019 figures are just through nine months; they will climb even higher by the time fourth-quarter results are released.

The bottom line is this: As the use of deadly force is put under increasing scrutiny, Axon's tools offer the most reliable source of information for the public. Its tasers are an alternative to bullets, and its cameras hold both the police and the people they are encountering accountable. It's not a perfect system, but it's the best there is. I don't think this will change.

Just as crucial from an investing standpoint, Axon has a virtual monopoly in both stun guns and body cameras. And its $4 billion valuation means -- in my opinion -- that there's tons of room for growth. But don't take my word for it: The company's founder and CEO has given up pay for the chance to grow Axon to an over-$13 billion company.

An identity solution for the digital age

Finally, we have Okta. Before the internet exploded twenty years ago, it was pretty easy to make sure people were who they said they were. While this brave new world is awash in possibilities, it introduces new obstacles. Chief among them is making sure the right people have access to the right data.

That's Okta's specialty. With Okta's tools, which it sells on a subscription basis, a company can manage what data its employees and customers have access to. While this article is too short to get into the nitty-gritty details, I believe one metric speaks for itself when it comes to Okta's effectiveness: the number of companies with annual contract values (ACVs) over $100,000. 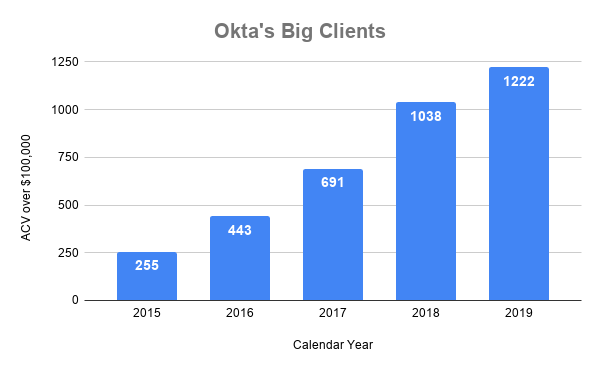 As with Axon, this chart will look even more impressive in the near-future: Only six months worth of growth are factored into the 2019 figures.

The story in my head -- when I'm thinking about how this can help pay for college -- is simple: This many companies are only willing to pay so much because Okta's technology works. As time goes on, such identity tools are only going to become more important. And because they are often rolled out company-wide, the switching costs are high. This protects Okta, to a certain degree, from competition.

The company believes it has a total addressable market of at least $18 billion. With sales of $487 million over the past year, it's just scratching the surface of that market.

What this means for your own college portfolio

There's absolutely no guarantee any of these companies will help send your child to college. But rest assured that my money is firmly where my mouth is: Over 20% of my family's real-life holdings are tied up in these three companies. They are all market leaders in industries that I believe will only grow in importance between now and when your little ones head off to college.