The streaming pioneer is beginning to tap a massive international opportunity.

While Roku ( ROKU -1.59% ) is mostly known for the boxes and dongles that make customizing the streaming video experience a snap, a lower-profile segment of the business now generates most of the company's revenue. The streaming pioneer sells its namesake devices at or near cost in order to expand its installed base, while making the bulk of its fortunes from advertising shown on the devices. This pivot in its business has richly rewarded shareholders, with its stock gaining nearly 500% since it debuted on public markets just two years ago.

Roku is firmly established in the U.S. and it is also available in seven countries in the Americas, but its international expansion is just beginning -- and that's where the company's biggest opportunity lies. The first sign that Roku is beginning to tap the lucrative European marketplace appeared Friday with the release of Roku TVs in the United Kingdom. 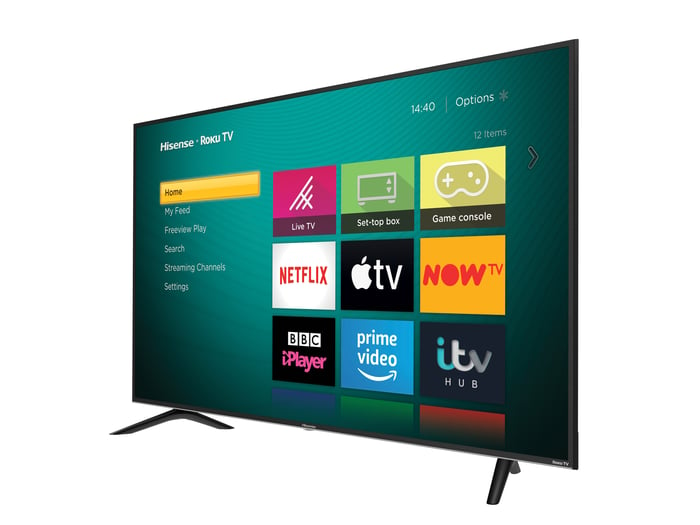 A foot in the global door

Back in September, Roku said that it had reached an agreement with Hisense to release the first Roku-branded TV in the U.K. The companies announced Friday that the Hisense Roku TV is available beginning this week, just in time for the important holiday shopping season. While the Hisense brand may not be familiar to U.S. investors, it's the leading provider of televisions in its home country of China, boasting a 17% share of the market.

The device features Roku's smart TV operating system (OS), which lets Roku participate in the advertising profits from the thousands of ad-supported streaming channels featured on its platform. The Roku OS has been the secret to the company's success in the U.S., so this is a logical next step in its international expansion. Partnering with a global brand like Hisense will augment the company's recent global debut of the Roku Express streaming device, and may eventually give the company a backdoor into the China market.

Roku has been fairly tight-lipped about its plans for tackling the global marketplace, though the company has identified international expansion as one of four areas where Roku is investing heavily for growth -- the others being advertising, the Roku TV OS, and The Roku Channel. During the Q3 conference call, CEO Anthony Wood said its focus at first will be "building our scale and then monetization will follow," the same strategy that brought the company so much success in the U.S. market.

Roku's success at home could just be the tip of the iceberg. William Blair analyst Ralph Schackart opined that Roku's growth trajectory could mirror that of industry leader Netflix ( NFLX -3.31% ). "In our view, Roku will experience similar phased stages of international growth as Netflix did during its international expansion," Schackart wrote on the subject back in August.

To put that into perspective, Netflix's subscriber base was just 17 million when the launched its international expansion with a move into Canada in September 2010, and it now boasts more than 158 million total subscribers just nine years later. Roku's active accounts currently top out at just 32.3 million, showing just how far the company could grow from here.

Streaming is still in the early stages of adoption in many countries around the world, and if the company's success in the U.S. has taught us anything, it's that there's a large appetite for ad-supported streaming services, which is something that's right up Roku's alley.