Please ensure Javascript is enabled for purposes of website accessibility
Free Article Join Over 1 Million Premium Members And Get More In-Depth Stock Guidance and Research
By Rich Smith - Nov 24, 2019 at 7:13AM

But if NASA needs to keep Boeing in the race, does it make any difference?

"For more than 20 years, the International Space Station (ISS) has operated as a laboratory, observatory, and factory in low Earth orbit. ... NASA spends between $3 and $4 billion annually to operate the ISS, including payments for transportation of crew and cargo. Since the end of the Space Shuttle Program in 2011, the Russian Soyuz vehicle has served as the sole means of transporting astronauts to and from the ISS."

So reads the introduction to NASA'S "Management of Crew Transportation to the International Space Station" report, dated November 14, 2019, before proceeding to recount how the cost of "seats" aboard Soyuz, initially a mere $21 million each, has quadrupled in price over the last 13 years. We're now paying nearly $86 million every time an astronaut wants to hitch a ride to ISS.

But what if we could get to ISS cheaper? 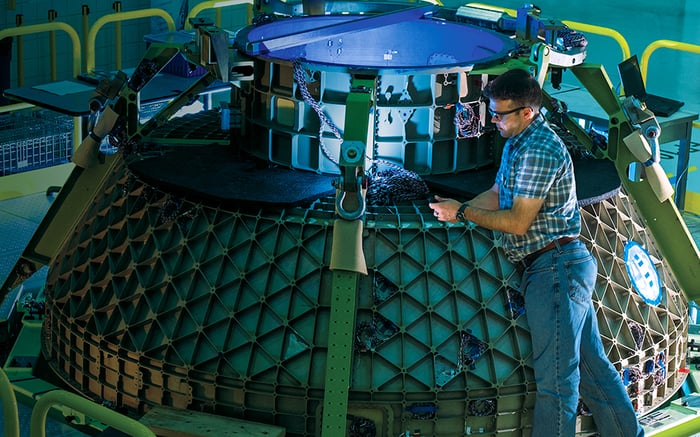 Two years after it was supposed to be in orbit, Boeing's CST-100 Starliner spacecraft is still a work in progress. Image source: Boeing.

Cutting the cost of space travel

Since 2006, NASA has bought 70 seats aboard Soyuz rockets for our astronauts, sending $3.9 billion of American taxpayer money to subsidize the space program of ... Russia. And so, in order to rectify this situation, in 2016 NASA announced it was awarding an entirely different contract -- this one going to Boeing ( BA -0.33% ) and SpaceX.

For a total of $4.3 billion, Boeing would develop a CST-100 "Starliner" spacecraft ($2.2 billion) and fly ($2.1 billion) a total of 24 astronauts to ISS aboard it over six missions beginning in 2017. For $2.5 billion, SpaceX would do the same thing with its Crew Dragon spacecraft. (SpaceX's development funding was $1.2 billion, and its mission funding $1.3 billion.)

Once they begin operating, the two companies will perform crew missions to ISS on a fixed-price basis. Citing "publicly available information," the Inspector General estimates that exclusive of development costs, the per-seat cost of these flights will be "approximately $90 million" for Boeing and "approximately $55 million" for SpaceX. Averaging out to $71 million per seat, this would represent a 17.5% savings over the prices Roscosmos is charging.

And this money would be going to develop the American space program -- rather than a foreign program that competes with it.

2019 is almost over, 2020 just around the corner -- and neither the Starliner nor the Crew Dragon has ever carried a human into space. (Although SpaceX's did once carry a mannequin.)

And the IG now estimates that "final vehicle certification for both contractors will likely be delayed at least until summer 2020 based on the number of ISS and CCP certification requirements that remain to be verified and validated."

Overdue for launch already, both Boeing's and SpaceX's commercial crew programs are also costing quite a bit more than planned. According to NASA figures, total Boeing funding related to commercial crew has already topped $4.8 billion, and SpaceX's funding has passed $3.1 billion.

On top of that, Inspector General's report zeroes in on delays in Boeing's Starliner program in particular. In a section of its report entitled "NASA Overpaid Boeing to Prepare for Multiple Crewed Missions," the IG notes that in order to ensure that Boeing has enough spacecraft built in time to meet its commitments to NASA, the agency offered Boeing an additional $287 million to accelerate its production of Starliners, raising Boeing's total take to $5.1 billion.

That's 64.5% more money to do exactly the same job that SpaceX was hired to do. And NASA offered this to Boeing "without offering similar opportunities to SpaceX."

Is that a problem? The characterization "NASA Overpaid Boeing" would seem to suggest it could be a problem for Boeing.

And yet, the IG goes on to acknowledge that its evaluation of the extra payments to Boeing come with "the benefit of hindsight," and the IG further acknowledges "the pressures faced by NASA managers at the time to keep the program on schedule to the extent possible."

Viewed in that context, the IG's report, while certainly critical of both NASA and Boeing, reads more like a stern finger-wagging, and an instruction to NASA to be more careful about its spending in the future (and in particular to look for "alternatives to achieve mission flexibility within established pricing" -- emphasis added) in the future. It sounds less like a threat to claw back unearned revenue from Boeing. Therefore I don't see any immediate risk to Boeing stock in this report.

Granted, Boeing disputes these numbers. In a "Statement Regarding OIG Report on NASA's Commercial Crew Program" released earlier this week, Boeing insisted that although "for proprietary, competitive reasons Boeing does not disclose specific pricing information," its per-astronaut flight price is "below the [$90 million] figure cited." Boeing also asserts that NASA received valuable consideration for its extra payments, such as "shorter lead time" on Starliner launches, "additional flexibility", and "schedule resiliency."

Even if that's true, however, Boeing does not contend that its Starliner will be cheaper than SpaceX's Crew Dragon. In the long term -- once both spacecrafts have been certified and begun flying -- I have to figure that that simple fact is going to work in SpaceX's favor, and to Boeing's detriment.