Jeans-focused fashion retailer The Buckle (NYSE:BKE) enjoyed one of its best trading days in years following the release of the company's fiscal third-quarter earnings on Nov. 22. Shares rose 20.5% as the company's top line and profit margins didn't buckle but exhibited surprising progress.

As I've recently discussed, the denim specialist is an overlooked retail story that should appeal to risk-tolerant income investors, as well as value seekers. Let's review the quarter as well as specific factors that catalyzed investors' enthusiasm on Friday. (Note that all comparative numbers in the following discussion refer to those of the prior-year quarter.) 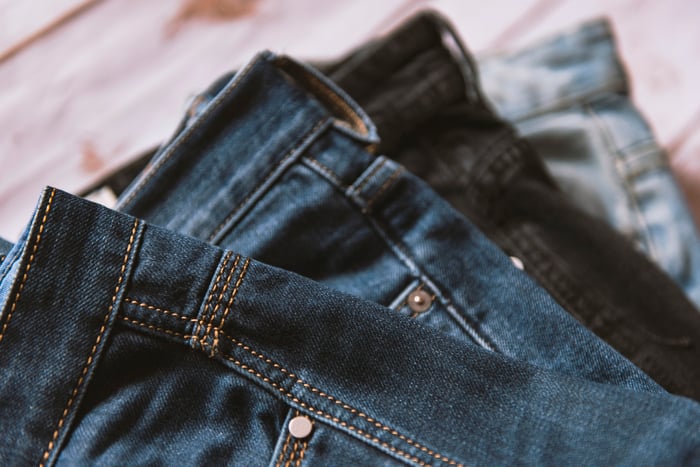 Overall, we were pleased with how we managed inventory through the quarter, reducing mark downs and improving overall margins. Across all women's categories, we sustained improvement in our overall sell-through throughout the quarter on off inventory. With where our inventory is positioned, we feel we are in more nimble as women's fashion continue to change and evolve.

In general, Buckle has avoided an excessive inventory buildup in recent quarters and has leaned toward reducing markdowns to support its margins. These actions have helped as it's followed the broader industry in gradually lowering its denim price points.

The Buckle has also demonstrated an ability to improve both comps and overall sales even as it closes underperforming stores. The company ended the third quarter with 449 stores (all located within the U.S.) encompassing 2.32 million square feet. That compares with 453 stores containing 2.34 million square feet of retail space in the third quarter of 2018. By allocating resources to store renovations rather than expansion, and improving inventory management, The Buckle is bucking larger retail trends that are pummeling many brick-and-mortar fashion chains. It appears that investors have noticed and may be ready to endorse the ongoing turnaround with significant share purchases.