Please ensure Javascript is enabled for purposes of website accessibility
Log In Help Join The Motley Fool
Free Article Join Over 1 Million Premium Members And Get More In-Depth Stock Guidance and Research
By Parkev Tatevosian - Jan 23, 2020 at 11:39AM

The Buckle is on pace to put an end to a disappointing streak.

After four years of declining sales, The Buckle (BKE 2.92%) is on pace to finish its fiscal year with a revenue increase.

As the retail apocalypse expanded and swallowed revenue from brick-and-mortar stores, The Buckle became one of its victims. The Buckle started to experience declining revenue in the year that ended in January 2016. The fall continued through the most recent fiscal year. From $1.15 billion in sales in fiscal 2014, sales fell to a low of $885.5 million in fiscal 2018, which ended last February. 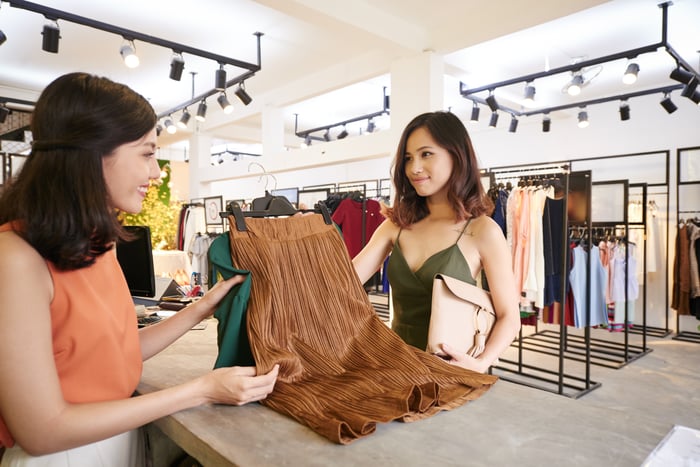 The company committed to maintaining its gross profit margin above 40%; what did drop was its operating profit margin, as the drop in sales took a toll. It's hard to fault a company that's been able to build and maintain a balance sheet with over $250 million in cash and no debt, but four years is a long time to suffer declining sales without taking more drastic action to turn things around.

The good news is The Buckle was able to stabilize after a horrid FY 2016, when sales fell 13%. In the ensuing two years, the declines have decelerated and allowed it to be in striking distance of returning to growth when it delivers its next annual report. If it was able to hold gross profit margin over 40% while increasing sales, then operating profit and net profit should also show expansion.

The Buckle earlier this month updated investors with its December sales figures and its 48-week fiscal-year-to-date results. It reported a 1.6% increase in YTD revenue, meaning it could end the year with a sales increase.

Part of the reason for the turnaround is lower prices, which led to an increase in the number of transactions. Lower prices encouraged more shopping, which is not a recent discovery in the study of economics, but sometimes lower prices do not increase shopping enough to justify the price decreases. A portion of the decrease in prices was not management's decision but rather the decision of brands it works with, as some of the women's denim manufacturers lowered price points.

Another reason for the rise in sales could be that The Buckle reached its optimal store count. It's been shrinking its number of stores, from its peak of 468 in 2016 down to its current 448. Shutting down a store hurts revenue in the year it is closed, but it should boost numbers in the following year as the smaller number of stores becomes the comparative base. Additionally, some of the transactions that would have taken place at the closed store will move to the next closest location or online, further improving comparable-store growth figures.

When business is going in the wrong direction, it can be a discouraging feeling for investors, management, staff, and all stakeholders. The Buckle is weeks away from reporting an uptick in sales and one can imagine those feelings of discouragement giving way to cautious optimism.

Shares are up roughly 40% over the past year. Its stock is now trading at a P/E of 12, compared to one of its competitors, Tilly's, which is selling at a P/E of 10. It appears the turnaround may already be priced into this consumer discretionary stock. Investors should wait for The Buckle to sustain an extended period of growth before being comfortable, believing that the company will not return to declining revenues soon.

This Retail Stock Has a 9% Dividend Yield: Is It a Buy?