The Buckle (NYSE:BKE) is a specialty apparel retailer with an impressive dividend and an improving sales story. After a few years of declining revenue, the company has shown revenue stabilization. However, shares have also surged more than 50% over the last six months, including a 20% gain after the company reported third-quarter earnings that exceeded consensus estimates in late November.

While the company's headline dividend yield is 4.6%, it's been offering an additional special cash dividend each year since 2016. In December 2019, Buckle announced a $1.25 per share special cash dividend. With the special dividend, the stock's yield is over 9%. Previous special dividends were $1.00, $1.75, and $0.75 per share in December 2018, 2017, and 2016, respectively. While the impressive dividend and revenue improvements may interest investors, could these positives be priced into the shares given the stock's powerful performance in 2019? 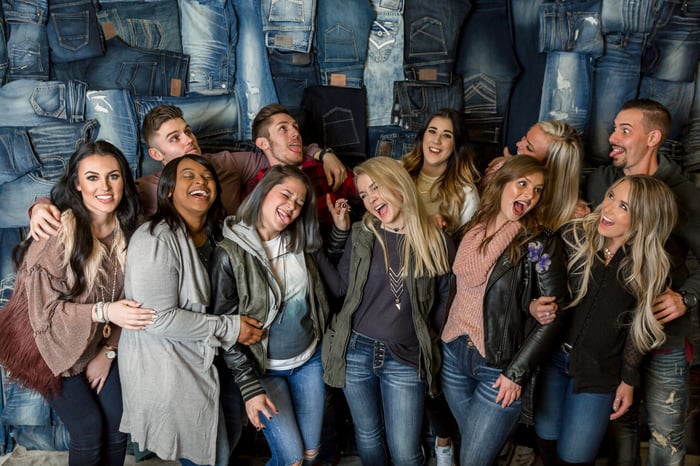 The Buckle's third-quarter results in November beat analyst expectations on both earnings per share and revenue. Results were boosted by strong sales of men's merchandise, which increased 6%. The retailer managed inventory well in the quarter, resulting in fewer markdowns and promotions.

Men's products have been strong growth drivers at the denim-focused retailer, with the third quarter being the eighth consecutive quarterly sales increase for that side of the business. Men's footwear has been the best performing category, boosted by impressive sales of exclusive styles of Hey Dude brand shoes and boots. Footwear sales rose 25% last quarter.

The company has also had success with its two trial pop-up youth-focused stores in Idaho. It's now keeping the stores open year-round. Sales of women's clothing were boosted by strong sales of denim jeans, helped by new brands and growth in its private-label business. Buckle is also seeing success with marketing initiatives that focus on body positivity and acceptance. Vice President of Women's Merchandising Kelli Molczyk said Buckle was "encouraged by early feedback to the campaign."

Looking ahead, both comparable sales and revenue growth are expected to be muted over the next year. During fiscal 2019, Buckle has added only one new store and remodeled five. Meanwhile, it has closed several stores. E-commerce is showing more substantial growth, but it only comprised about 12% of sales in the third quarter. Analysts are projecting earnings growth of 4% on sales growth of 1.5% for the current fiscal year, which ends in a few weeks. Analysts expect earnings and revenue growth of about 1% in fiscal 2020.

Should you invest in shares now?

Given the lack of compelling growth drivers in the future and the run-up in its share price, Buckle does not look like a compelling buy today. Shares of Buckle are trading at about 13 times forward earnings, compared to the S&P 500's 20 times and the consumer discretionary sector's 25 times. However, competitors like American Eagle Outfitters (NYSE:AEO) are trading at lower multiples (at 10 times forward earnings) and have more impressive revenue growth rates. Analysts expect American Eagle's revenue to grow more than 4% next year. For investors who are interested in The Buckle's robust dividend, I would wait for a pullback to buy shares. The current valuation is not very appealing for a company with fairly muted growth opportunities.