The stocks of Magenta Therapeutics (NASDAQ:MGTA) and Molecular Templates (NASDAQ: MTEM) bolted skywards last week, to the tune of 39% and 28% respectively. 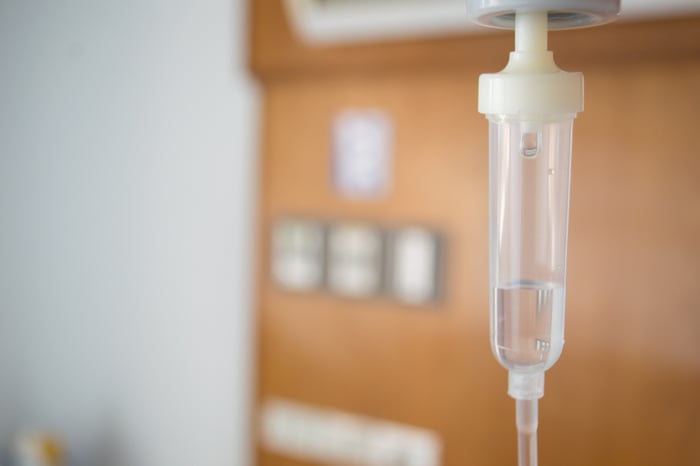 On Nov. 18, Molecular Templates and Vertex Pharmaceuticals (NASDAQ:VRTX) forged a discovery and development collaboration to create novel targeted conditioning regimens applicable to gene-editing, CAR-T, and stem cell transplants. Vertex shelled out $38 million of up-front cash and an equity investment in Molecular Templates. The stock barely flinched, losing $0.03 from the prior day's closing price.

The next day, Nov. 19, Vertex and its collaborator CRISPR Therapeutics announced positive safety and efficacy data for the gene-editing therapy CTX001 in its first two patients. One patient had severe sickle cell disease; the other had beta thalassemia. These interventions edit a patient's genome, potentially allowing for a one-time curative treatment. Both patients received the chemotherapy busulfan prior to CTX001.

Revisiting the prior day's collaboration announcement, biotech investors focused on comments made by Vertex about how Molecular Templates could benefit the CTX001 program.

"We believe that gene editing holds significant promise in the treatment of severe hemoglobinopathies such as sickle cell disease and beta thalassemia, and Molecular Templates' unique technology platform could play an important role in creating a targeted conditioning regimen that could replace chemotherapy currently required in conditioning regimens and thus enhance the overall future treatment experience for patients."

The message was loud and clear

Investors jumped on the message from Vertex, one of the biotech industry's stalwarts: Non-chemotherapy conditioning approaches are the future for gene and cell therapies.

In response, the stocks of other companies focused on achieving that goal (like Magenta) shot up. In fact, Magenta's nearly 40% gain in share price came during a week when it didn't release any news.

Magenta plans to present data on Dec. 6 at the American Society of Hematology's Annual Meeting for its lead program CD117-ADC. Targeting a protein on hematopoietic stem cells called CD117, the treatment eliminated mutated cells without the need for chemotherapy or radiation. Magenta believes CD117-ADC can potentially be used for genetic diseases like sickle cell disease, prior to either gene therapy or hematopoietic stem cell transplantation (HSCT).

Magenta and Molecular Templates are not the only players in the field. Forty Seven and bluebird bio paired up earlier this month to develop antibody-based conditioning regimens for HSCT. According to the World Health Organization, 50,000 HSCT procedures are performed annually worldwide.

Furthermore, recently approved CAR-T for cancer, such as Kymriah from Novartis or Yescarta from Gilead Sciences, require three days of cyclophosphamide and fludarabine. Developers of these and next-generation CAR-T treatments also seek to eliminate chemotherapy or radiation.

Patients greatly need less toxic methods to prepare them for gene- and cell-based therapies, or stem cell and bone marrow transplants. Many patients, particularly the elderly, are deemed ineligible for these interventions because the toxicity could be too severe. Any success could have broad implications for the treatment of cancers and genetic diseases.

While a variety of successful approaches may ultimately emerge, Magenta has taken an early lead with CD117-ADC. Molecular Templates, with Vertex as a seasoned partner by its side, may soon leap onto the scene with a targeted approach derived from its "engineered toxin bodies" platform.

The investor takeaway is clear: New treatment modalities will be dependent on non-chemotherapy conditioning. Investors in biotech companies that can figure out that piece of the puzzle should be richly rewarded.