Please ensure Javascript is enabled for purposes of website accessibility
Free Article Join Over 1 Million Premium Members And Get More In-Depth Stock Guidance and Research
By Billy Duberstein - Nov 25, 2019 at 11:00AM

David Tepper’s Appaloosa Management has had shifting views on the memory giant.

One of the world's top hedge fund managers of the past 25 years has been David Tepper of Appaloosa Management. Since 1993, Appaloosa has achieved remarkable 25% average annualized returns. That's significantly better than the best-performing technology mutual fund, the S&P 500, and even Warren Buffett's Berkshire Hathaway ( BRK.A -0.29% ) ( BRK.B -0.61% ) over that time.

This year, Tepper decided to stop taking outside investor money, turning Appaloosa into a family office to manage only his own fortune. However, Appaloosa is still releasing 13F filings, which show the latest moves Tepper has been making.

Over the past two years, the stock of Micron Technology ( MU 1.37% ) had been one of Tepper's favorite holdings. Tepper is a value investor and was perhaps attracted to Micron's very low PE ratio during that time. In addition to its attractive valuation, Micron is also at the center of many exciting technology trends, including artificial intelligence, the Internet of Things, and 5G communications.

On the other hand, perhaps more than any other U.S. stock, Micron is the most front and center in the U.S.-China trade war. The volatile nature of Micron's high upside combined with high risks has been reflected in Tepper's portfolio: For several recent quarters, Micron was actually Appaloosa's largest holding. However, in the second quarter of this year, Appaloosa very quickly liquidated almost its entire Micron stake in a huge about-face.

However, according to the latest 13F for the third quarter of 2019, it appears Micron is back in Tepper's good graces, and Appaloosa has bought back in to the memory giant. So why is Appaloosa bullish on Micron again? 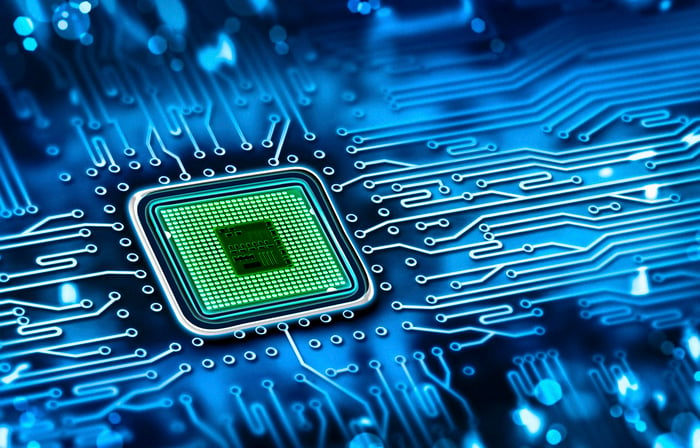 From late 2016 to mid-2018, Tepper increased his stake in Micron, making it Appaloosa's largest long position for several quarters. However, once the memory market peaked in May-June of 2018, Micron's stock price fell, and Appaloosa actually sold as the stock was going down. Though Tepper is known for making winning contrarian bets, it doesn't appear that he traded Micron particularly well over this time.

Now, some of the drawdown was based on Appaloosa's reducing its overall equity exposure as the trade war heated up and interest rates rose. For instance, even though Appaloosa cut its Micron stake by more than half in Q4 of 2018, it was still Appaloosa's largest equity position at that time and remained so in Q1 of 2019. 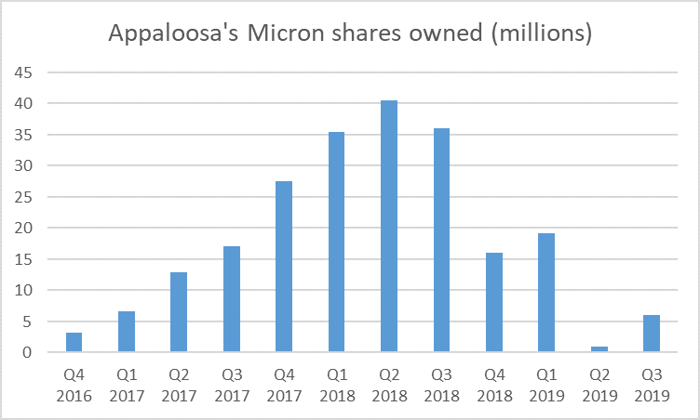 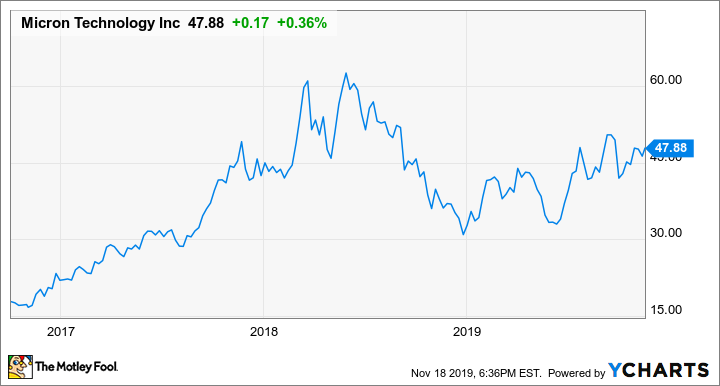 After completely selling out, Tepper wades back in

Curiously, Micron rapidly went from being Appaloosa's largest position to nearly zero in Q2 2019; the fund almost completely liquidated its position that quarter.

This likely happened when U.S.-China trade relations took a nosedive in early May. While many had expected a comprehensive trade deal to take place around then, on Sunday, May 5, President Trump tweeted that China had reneged on portions of the deal and that the U.S. would be adding more tariffs to China imports. Making things worse, the administration then announced a wide-ranging sales ban on Huawei on May 15.

It's logical that Tepper decided to quickly get out of Micron at that point, as Huawei made up 13% of Micron's sales over the quarter ended in May, making it Micron's largest single customer.

However, as the chart above shows, Tepper has jumped back into Micron's stock in the third quarter, increasing his stake to 6 million shares. That's a far cry from the peak allocation of 40.5 million shares reached back in Q2 2018, but it does show that Tepper hasn't lost faith in Micron. In fact, Micron's stock is already back to being Appaloosa's fifth-largest equity holding.

There could be a few reasons for the renewed optimism. In late June, Micron issued a better-than-feared earnings report and disclosed that it was still selling some memory products to Huawei that fell outside of the scope of the entity list ban. The not-so-bad earnings report was followed by other positive events. This included a power outage at a plant jointly owned by NAND competitors Toshiba Memory Corporation and Western Digital, followed by heightened tensions between Japan and South Korea, which threatened supplies of key materials to Micron's large South Korean competitors Samsung and SK Hynix.

Finally, late in the quarter, several data points emerged that indicated a potential memory recovery, including high demand from 5G phone vendors and the return of data center spending.

Clearly, Tepper and the team at Appaloosa are very smart, but the fund's uncertainty around Micron shows the headline risk and wide range of outcomes for the stock.

Although the uncertainty is high in the near and medium terms as trade uncertainties loom, I believe memory demand will eventually come back and Micron's stock will benefit. Micron still has the best product portfolio of any memory vendor, and memory and storage sit at the heart of next-generation artificial intelligence and big-data applications.

Though it's not for the faint of heart, Micron's stock clearly still has lots of potential, and it's encouraging to see Appaloosa buying back into it.