Not only has China been a hot topic because of the ongoing trade spat with the United States, the world's largest auto market was once the promised land for Detroit's second-largest automaker, Ford (NYSE:F). The folks at the Blue Oval were admittedly late to the market but quickly made up for lost time as sales more than doubled between 2012 and 2016. Ford's growth in China was supposed to continue and eventually become an additional pillar of financial strength, standing alongside its lucrative North America business -- but that plan has hit a major speed bump. Just how bad are Ford's results in China, and are there hopeful prospects?

The ugly truth, and silver lining

Unfortunately, when it comes to the bird's-eye view, there isn't much to enjoy in terms of Ford's China sales and consolidated revenue. Ford and its joint ventures sold 131,060 vehicles in China during the third quarter, a 30.3% decline compared to the prior year. Consolidated revenue followed that negative trend with a 27% decline during the third-quarter. And while those sales declines are ugly enough, take a look at how far Ford's sales in China have plunged since 2016. 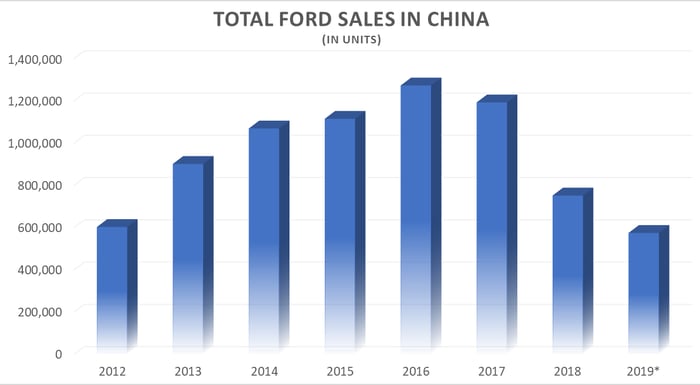 Perhaps even worse than Ford's sales decline in China was the plunge in profits. Consider this: In 2017, Ford's business in China reported $152 million in pre-tax profits, which swung to a staggering $1.5 billion pre-tax loss during 2018. Through three quarters of 2019 Ford has generated a $564 million pre-tax loss, but there is a sliver of hope as the company continues to narrow its pre-tax losses compared to 2018 despite continuing sales and revenue declines. Ford's pre-tax result in China increased 15% during the first quarter, 68% in the second quarter, and 26% during the third quarter, all compared to prior-year pre-tax results. That proves that Ford's improved operations, cost cuts, and other favorable factors are supporting the bottom line despite its sales being stuck in decline.

As management continues to improve operations to support its bottom line, there should be help coming in the form of new and refreshed products to help drive sales and revenue higher in the near term. At the heart of the plan is to launch 30 or more new Ford and Lincoln vehicles, some designed specifically for the Chinese market -- check out the unique front face of China's Escape in the picture below -- over the next three years. Over 10 of those models will be electrified vehicles designed to take advantage of China's electric vehicle market, which has been relatively resilient to the country's auto market slowdown. 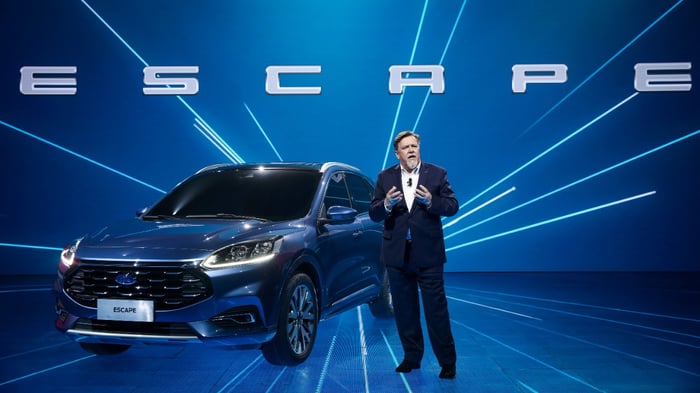 In broader terms, beyond the previously mentioned product launches, Ford is circling China on the map and doubling down in other areas. Ford believes China is leading in smart vehicles and plans to develop more autonomous technology, in anticipation of driverless vehicles one day hitting the road, by strengthening strategic partnerships and developing local Chinese talent. Ford already took one step earlier this year by establishing a new China leadership team in an attempt to disrupt its previous way of strategic thinking. It's a smart move, because Ford not only needs a fresher vehicle portfolio more closely tailored to the Chinese consumer, it needs to rethink its strategy and how to optimize business and technology development in China long-term.

"China is leading the world with smart vehicles, and is a key part of Ford's global vision for the future. We are excited about seeing more products developed in China, for China and from China," said Jim Hackett, Ford's CEO, in a press release. "Ford is deeply committed to China, and with our new China leadership team and vision, we're investing in the future -- a future that starts today."

Ford's results in China are rough currently, and investing in automotive stocks can be tricky, but there was certainly a silver lining this year as the company narrowed its pre-tax losses despite a lack of sales growth. Those cost and operation improvements, combined with a new leadership team, new vehicle launches, and a renewed focus on developing vehicles tailored for the Chinese consumer, should all bode well for the company's future. Ford hasn't yet proven it can turn China into a pillar of financial strength, but it has proven the segment can drive sales higher, as it did between 2012 and 2016. It has also proven it can support the bottom line when sales are weak. There's no doubt Ford faces a tougher environment for growth in China now, but if management executes its China 2.0 plan, investors can hope for a similar surge in its China business seen earlier this decade.