Athleisure, or the trend to dress in athletic wear no matter what you're doing, has been slowly breaking ground as a normative style of clothing. Today, countless large and small companies offer products in this category at various price points. Four of the largest companies are Nike (NYSE:NKE), Under Armour (NYSE:UAA) (NYSE:UA), Adidas (OTC:ADDYY), and Lululemon (NASDAQ:LULU). Let's take a closer look at them and see which one has the most potential at the moment.

Nike is on top

The established leader of the pack, Nike is a blue-chip stock with annual sales of $36 billion for 2018, a figure that enjoys solid growth every year. The company launched in the late 1970s with a patented air-cushioning system for its athletic footwear that it still uses today. Though it has faced competition from other shoemakers over the last four decades, it has always emerged as the strongest and most forward-looking, transforming itself from a simple U.S. sneaker manufacturer to a global powerhouse of athletic footwear and apparel. 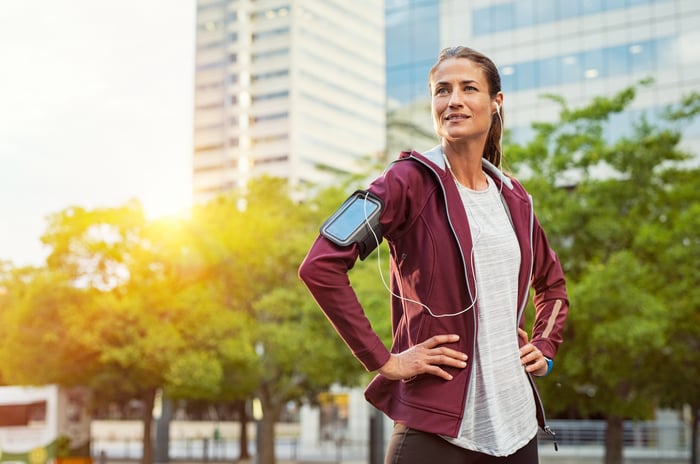 Why has Nike been so successful? The umbrella reason is that the company keeps up with the times. This comes out in a few ways, including the constant launch of updated products, the ability to move into new product channels, and the relationships with current athletic superstars.

Nike's stock has grown with the company to an all-time high of $90 per share earlier this year, reflecting investor confidence in the company's ability to keep on producing. It also recently announced an 11% increase in its dividend, another perk for shareholders.

If there's one negative aspect of Nike, it would be the company's room for growth. If you're already at the top, how much farther can you go?

After slowing down in 2017, Nike's revenue has been seeing double-digit growth for most of the past six quarters, so it seems there's actually still plenty of room at the top. Its revenue is still growing faster than that of most of its peers, and only Lululemon is outdoing its numbers. Here are the year-over-year sales growth figures for the four top U.S. athleisure companies based on their most recent earnings reports.

While Lululemon is tops in growth in its most recently reported quarters, it's a much smaller (and newer) company with a market cap of $28 billion versus Nike's $145 billion. So while it's trying to catch up and showing higher growth rates on smaller financials, Nike's a much bigger, more established fish in the pond.

Adidas, which is the oldest of these companies, is also seeing steady growth but at a slower pace. Its latest growth figure for U.S. sales, though, was 10%, while Nike's U.S.-specific growth was only 4%.

Lululemon is getting itself together

Lululemon is the newest and potentially the most exciting of these four companies. The company introduced yoga pants to the mass market, which took it to stardom about a decade ago. It has strategically embraced its position as a popular athleticwear company and branched into many segments, including men's, which saw a 35% increase in sales for the second quarter, and it's even bringing out an athletic shoe to compete with rivals.

The company also saw high growth in global markets of 34% and increased digital sales of 31%. However, it's still a relatively new company that has had to rebound after some initial marketing errors, such as a see-through-pants fiasco in 2013. It has a good track record for dusting itself off and getting back in the saddle, but it remains to be seen whether the company can maintain its growth through changing trends.

Under Armour is struggling

Under Armour is facing all sorts of trouble, including sliding sales in the U.S. and an ongoing investigation into financial reporting practices.

The company's tiny positive growth numbers reflect global sales growth of 12%, where Under Armour is still emerging. North American sales, however, have been sluggish for quite some time and had a 3% decline in the third quarter.

CEO Kevin Plank's recent departure opens the door for a new leader to provide a different direction for the company, but it may take a long time for Under Armour to stabilize.

Where does Adidas fit in?

Adidas is headquartered in Germany and has a solid European following. It's also seeing strong global sales and outdid Nike's U.S. growth figures in its most recent earnings statement.

The company has been an important part of the athleisure trend, forming powerful relationships with celebrities -- not just athletes -- to promote its products. It has been able to connect with a new generation that has recycled its Superstar sneakers and taken up other new products with the trademark triple stripe to be the ultimate in cool. Finally, it has made some strategic acquisitions, such as Reebok, that give it a broader range of products to challenge Nike in footwear.

All of the companies have seen strong share price movement this year.

Both Nike and Adidas, as well-established, blockbuster brands, are likely to continue generating upward movement. Adidas has outperformed Nike on the market this year, but Nike's still larger and has seen more growth. Lululemon has seen a phenomenal shift, and as the smallest company of the four in terms of sales, it has the most potential for growth. However, its share price is already outsized for its revenue, with a price-to-earnings ratio of 53, so it would have to continue operating error-free to maintain inspired investors.

As for Under Armour, it's in a messy situation and has disappointed shareholders. With its strong name and global rise, however, this may be an excellent opportunity for risk-hungry investors to buy the stock at a low price.

While there are solid reasons to choose any of the above as a stock pick, Nike is currently the best buy as it appears to have a solid plan for steady long-term growth.