A number of biotech stocks have made major moves over the past week. One of those was Myovant Sciences (NYSE:MYOV), a $1.1 billion biopharma company, which had its shares more than double on Nov. 19 following impressive clinical trial results in treating early, androgen-sensitive prostate cancer.

With hundreds of thousands of new prostate cancer patients diagnosed in the U.S. alone, there's plenty of potential for Myovant to hit a financial home run if its drug receives U.S. Food and Drug Administration approval. At the same time, this drug is well-positioned to become a leading treatment option for women with uterine fibroids.

Let's take a more detailed look at the company's recent results and the strength of its flagship drug candidate. 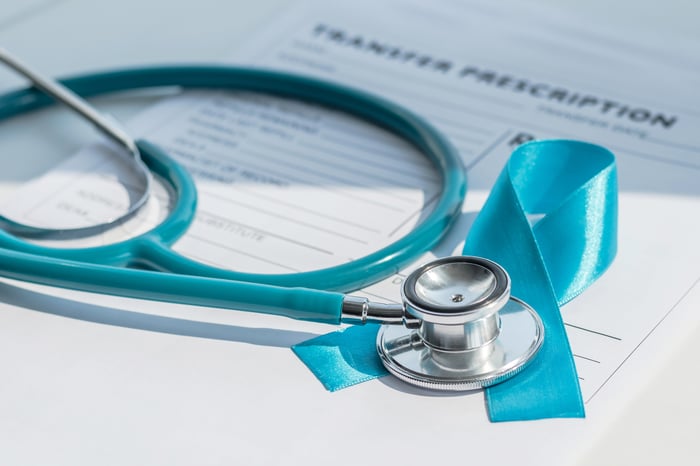 Prostate cancer is one of the leading causes of death in men, with around 174,000 patients in the U.S. diagnosed with the disease each year. While many drugs exist that cater to prostate cancer patients who have become resistant to initial androgen-lowering treatments, there's a strong market for drugs that can target prostate cancer while in its earlier, androgen-sensitive state.

The growth of prostate cancer cells is accelerated by the presence of sex hormones (called androgens) such as testosterone. As such, lowering a patient's testosterone levels can significantly slow down the disease's progression. However, after a certain point, prostate cancer becomes resistant to androgen-lowering treatments, which then requires different types of drugs to treat.

Myovant has been developing a drug called relugolix, which is being tested in men with androgen-sensitive prostate cancer. Its recent phase 3 HERO trial demonstrated that the vast majority of men taking a once-per-day relugolix pill were able to reduce testosterone levels significantly and slow down the disease's progression. The trial met all of its primary and secondary endpoints and had a similar rate of adverse reactions in comparison to the standard-of-care leuprolide treatment.

Relugolix had also been tested as a treatment for another condition. Earlier this year, Myovant announced impressive results for another phase 3 trial with the drug, which targeted women with uterine fibroids, a condition where noncancerous tumors develop inside the uterine wall. Myovant's relugolix had shown showed significant improvements in reducing the excessive bleeding that results from the fibroids. This is a major market that shouldn't be overlooked by investors, with some research suggesting the U.S. uterine fibroid market could reach a whopping $39.9 billion by 2022.

Instead, Myovant's relugolix would compete with leuprolide -- commonly known as Lupron -- which is owned by AbbVie (NYSE:ABBV), and a drug called Zoladex, which is owned by AstraZeneca. The results from this recent phase 3 study would suggest that relugolix has a slight edge in terms of efficacy, with a 96.7% response rate in sustained testosterone repression among patients in comparison to leuprolide's 88.8%. As long as relugolix holds some sort of competitive edge, whether in terms of efficacy or safety, there's a good chance it will be able to carve out a niche in this market.

As for relugolix's potential as as a treatment for uterine fibroid-induced bleeding, Myovant's drug will soon be competing with AbbVie's own drug candidate, elagolix, which was recently submitted for FDA approval earlier this year following its own strong phase 3 trial results. However, elagolix was already approved by the FDA in 2018 as a pain treatment for a somewhat similar, albeit separate, condition known as endometriosis, which is when uterus-specific tissues appear in other parts of the female reproductive system, such as the ovaries or fallopian tubes. The fact that AbbVie's elagolix already has FDA approval for another uterine-health-related condition likely will help its odds for getting approved as a uterine fibroid treatment as well.

Although Myovant is working on its own phase 3 trial for relugolix as an endometriosis treatment, it only recently completed patient recruitment for the trial. This means that in comparison to AbbVie's elagolix, it's not going to enter the market (if it will at all) until much later in the future, possibly until 2021.

The main problem for Myovant is that, whether relugolix is in the prostate cancer or the uterine fibroid market, it's competing with pharmaceutical companies much larger than itself. AbbVie, for example, is around 115 times larger than Myovant. It'll easily be able to have a larger marketing budget than what Myovant can afford, not to mention the fact that as a well-known pharmaceutical giant, it already has deeper connections in the healthcare industry.

However, considering the previously mentioned size of the uterine fibroid treatment market, Myovant needs to capture only a small portion of the market to be a financial success. As long as relugolix isn't significantly inferior to elagolix in safety or efficacy (which seems unlikely), even a mildly successful relugolix would prove to be a home run.

Myovant has two chances to hit it out of the park with relugolix, first in the prostate cancer market and second in the uterine fibrosis market. The company is facing competition from larger, better-funded industry giants, which means that relugolix needs to have an edge over its competitors' treatments in order to stand out amid stronger competitor marketing. Relugolix seems to have this edge in the prostate cancer field, but in uterine fibrosis, things are still uncertain.

The last thing worth noting is that Myovant is burning through cash at a significant rate. In its recent fiscal Q2 results, the company burned through $70.6 million over the past three months, with its cash reserves falling to just $157.6 million. Myovant has no revenue whatsoever right now, so it needs to have enough cash to last it for at least a year if not a bit longer. Thankfully, the company did mention it would be securing approximately $350 million in financing to make ends meet, likely until the end of 2020.

Overall, investors are right to be optimistic about the stock. Myovant's stock price has since dipped a little in a post-excitement correction, which makes it a bit of a better buy now than it was when the news of its prostate cancer trial first broke. If you're comfortable with a high-growth, high-risk biotech investment, consider adding a small starter position of this stock to your portfolio.