Please ensure Javascript is enabled for purposes of website accessibility
Free Article Join Over 1 Million Premium Members And Get More In-Depth Stock Guidance and Research
By Steve Symington - Nov 27, 2019 at 9:00AM

The video-processing chip leader pulled back even after posting solid quarterly results. Here's what investors need to know.

Ambarella ( AMBA -3.41% ) released better-than-expected fiscal third-quarter 2020 results after the market closed on Monday, notably including a return to top-line growth with the help of an early ramp up in shipments of its newest computer vision chips. Though shares of the video-processing chip leader initially rallied as much as 6.4% Tuesday morning in response, the stock quickly gave up its gains to close down more than 7% on Tuesday despite its relative outperformance.

Let's take a closer look at what Ambarella had to say, starting with how its headline numbers fared compared to the same year-ago period:

Revenue was above Ambarella's guidance provided in late August for between $63 million and $67 million. Trending toward the bottom line -- and though Ambarella didn't provide specific quarterly earnings guidance -- its adjusted (non-GAAP) gross margin contracted to 58.1%, down from 60.9% a year earlier but also above guidance for a range of 56% to 58%. Excluding items like stock-based compensation, Ambarella generated (non-GAAP) net income of $11.3 million, or $0.32 per share, up from $0.21 per share a year ago and around $0.12 per share ahead of Wall Street's consensus estimates. 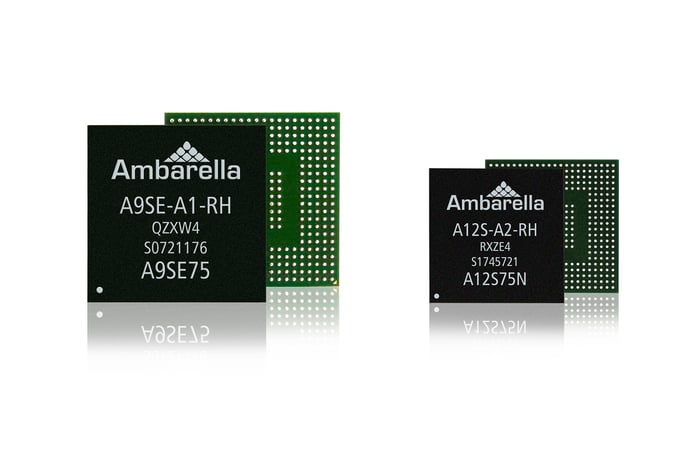 Also during the quarter, early last month the U.S. Department of Commerce announced it was adding more than two dozen Chinese security technology companies to its Entity list of sanctioned companies. The move sparked a number of analyst downgrades for Ambarella, shares of which plunged in response, given concerns that several of Ambarella's customers were on the list. The following week, however, Ambarella took the unusual step of issuing an SEC filing stating that the company did not expect the news to have a significant negative impact on its near-term financial results.

Our October 15th update provided clarity on one trade issue faced by the company, though other foreign policy, trade and IP matters remain outstanding, with a wide range of potential outcomes. Despite the geopolitical and trade uncertainties, in Q3 we demonstrated continued progress toward our transition to a video AI company, with mass production shipments into the automotive and security camera markets continuing to ramp.  Our family of computer vision ("CV") products all contributed to the early revenue ramp and we shipped pre-production parts and development systems to more than 50 customers in the quarter.

For the current fourth quarter of fiscal 2020 -- which is typically a seasonally slow period -- Ambarella told investors to expect revenue of between $55 million and $59 million -- the midpoint of which was technically above the $55.7 million most analysts were modeling. Adjusted gross margin should arrive between 56.5% and 58.5%.

Of course, it likely didn't help that shares of Ambarella were already up 74% in the year leading into this generally solid quarterly report. After coupling that rise with management's astute words of caution given today's uncertain macro environment, it's hard to blame investors for taking some of their profits off the table.