It's difficult to argue against market-beating performance, and Warren Buffett's Berkshire Hathaway (NYSE:BRK.A) (NYSE:BRK.B) has done it far more often than not. While it's struggled in recent years, that may have more to do with the environment than a loss of Buffett's -- and now his acolytes' -- magic touch. The fund's average annualized performance since its inception in 1965 through last year has been more than twice as fruitful as the S&P 500's typical yearly gain.

At the other end of the spectrum, General Electric (NYSE:GE) has become a tough reminder that past performance is no guarantee of future results. Even with the rebound effort that started to take shape a year ago, shares of the tarnished blue chip stock are still less than one-third of their peak value from 2016. The iconic industrial company appears to be fighting for its very survival.

This is one of those rare cases, though, where the risk of owning a seemingly troubled name might be worth more than the reward of holding a more proven one. In other words, perhaps a bet on General Electric isn't a crazy idea right now.

The case against Berkshire Hathaway

The echoes of David Rolfe's scathing words penned in October are still ringing. That's when Wedgewood Partners' chief investment officer commented, "Thumb-sucking has not cut the Heinz mustard during the Great Bull Market," adding that strong performers like Mastercard and Visa -- neither of which Berkshire has owned in recent years -- "should have been layups for Buffett." 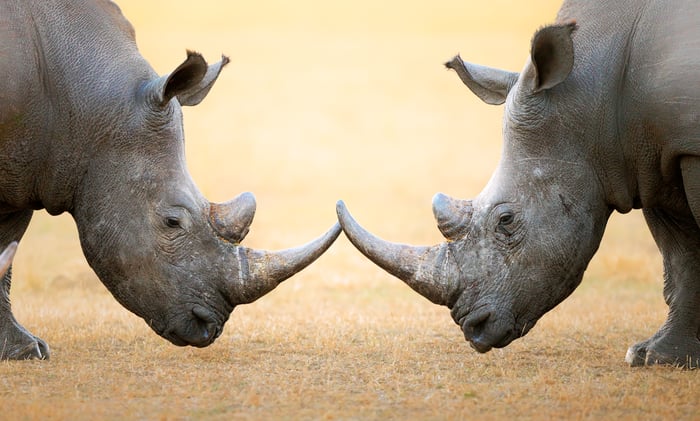 To be fair, Buffett himself hasn't ignored the un-Berkshire-like results. In May, the Oracle of Omaha told CNBC that right now and for the foreseeable future, the return on investment in Berkshire Hathaway "would be very close to the same" as the return on a basic index fund.

It was Charley Ellis who may have articulated the crux of Buffett's challenge. The author of A Random Walk Down Wall Street and former investment committee chair of the Yale University endowment explains:

Back in the '60s, the mistakes were made by individuals and they would last for months. I remember once watching DuPont drop 50% in price for reasons that were clearly predictable. It was shooting fish in a barrel, really easy. Now you can only buy from or sell to other professionals. ... That's a hell of a change, but it came gradually.

In short, the edge that came from having a Buffett-like discipline isn't what it used to be. It can be taught to others. It simply may not matter anymore. At the very least, something needs to shake up investor psyches (professional and otherwise) to allow Buffett's proteges to act on opportunities before others do. An unexpected bear market may be the only thing that does the trick.

The case for GE

General Electric has been challenged as well, but for a different reason, and with a light at the end of its tunnel.

Here's the short version of a long story most investors know: For years, GE made ill-advised investments, and rather than tackle problems head on as they surfaced, the company kicked the can down the road. Now the company is $93 billion in debt and sitting on another $135 billion worth of obligations linked to its insurance plans and pension liabilities. Cash flow went deep into negative territory, to the tune of $4.4 billion, last year.

The plan to keep General Electric afloat while CEO Larry Culp sells off some assets and fixes others, though, is working. It's been ugly and inconsistent at times; the power unit remains troubled. But, it's mostly taken hold. Last quarter's operating cash flow of $1.1 billion extends a swing back into the black that took shape earlier in the year, and perhaps more noteworthy, the company has upped its industrial free-cash-flow guidance for the year for a couple of quarters in a row now. It's a start.

A new CFO will oversee the next era of the fiscal turnaround. Carolina Dybeck Happe, CFO of Copenhagen's shipping company Maersk, is scheduled to assume the role beginning early next year. Happe is an outsider in more ways than one, but that lack of attachment to any of General Electric's proverbial baggage may be just what the company needs to further remove itself from its troubled past.

Five years ago, when the full scope of its balance-sheet woes was becoming known, General Electric might have been a name best left avoided. Five years from now, after a bear market has a chance to temper investor enthusiasm, the Warren Buffet approach to stock-picking might bear above-average fruit again.

Currently -- with the quality of investments waning while General Electric is only beginning to offer fresh hope -- the risk/reward ratio favors holding a GE stake.