Facebook (NASDAQ:FB) wants to know what you're up to and is willing to pay for your opinions. This week, the social media juggernaut launched a new app called Viewpoints, which is designed to conduct market research while compensating users for taking surveys with a point system.

The results will be used to inform Facebook's product development, and the first program will be a "well-being" survey that the company says will "help us build better products that aim to limit the negative impacts of social media and enhance the benefits." The survey takes about 15 minutes and earns users 1,000 points that can be redeemed for $5. 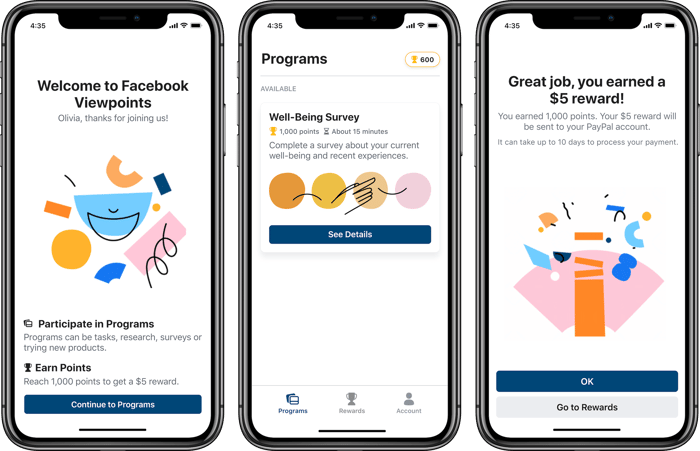 Like nearly all of Facebook's other market research apps, Viewpoints will also spy on you.

Viewpoints will collect all sorts of device data "automatically"

The predecessor for Viewpoints was called Facebook Research, which similarly paid teenage users to install the app. In reality, Facebook Research was secretly spying on those users, as it was really just a VPN app built using the same code as Onavo Protect, another VPN app that Facebook had previously used to track all sorts of activity -- like what competing social media apps users might also have on their phones -- by rerouting network traffic through its own servers.

Onavo helped inform massively consequential strategic moves, including the decision to acquire WhatsApp, as well as what features to copy from Snap's Snapchat. Facebook killed off Onavo earlier this year following controversy, and then over the summer launched an Android market research app called Study. Facebook Research was never distributed through Apple's iOS App Store since it was so invasive, and instead abused an enterprise certificate program to sideload the app onto iPhones.

In addition to collecting survey responses and feedback, Facebook is looking for data that it can feed into artificial intelligence (AI) and machine learning technologies, such as voice recordings to improve voice recognition. In its Viewpoints data policy, the company also admits that it will "automatically" collect all sorts of other information, including but not limited to:

Some of this data access must be granted with user permission, as both Android 10 and iOS 13 include more granular notifications and controls around when apps are accessing sensitive data like a device's location. Still, Facebook's spying attempts are always unsettling for privacy-conscious users.

Viewpoints is available through Google Play and the App Store, so it ostensibly abides by the privacy guidelines of each respective digital storefront. Apple had removed Onavo from the App Store for violating its privacy policies around data use.