A recent forecast from eMarketer says the bulk of Snapchat's user growth will come from people with the most extra money to spend.

What a difference a year makes. Snap stock is now trading above $15 per share, largely driven higher by a combination of rekindled user growth and improving per-user revenue. The social networking app now boasts 210 million daily active users, up 13% year over year, and Q3's total revenue of $446 million translated into average revenue per user (ARPU) of $2.12. All of the metrics showed improvement, and the quarter marks the third in a row the company's user base expanded.

Bigger and better numbers are on the way, too, if eMarketer's most recent forecast is anywhere on target. In fact, eMarketer's outlook includes a nuance that could end up even taking analysts by surprise.

The bar is set high

Facebook ( FB -4.01% ) and Twitter ( TWTR -4.02% ) are still the market leaders of the social networking arena, at least in terms of revenue. The former reported 1.62 billion daily active users (DAUs) in its third-quarter report, each contributing roughly $7.26 worth of revenue to the mix, for perspective. Twitter is miles behind with its 145 million monetizable DAUs, though with an ARPU of $5.68, it's clearly doing more with less compared to Snap. 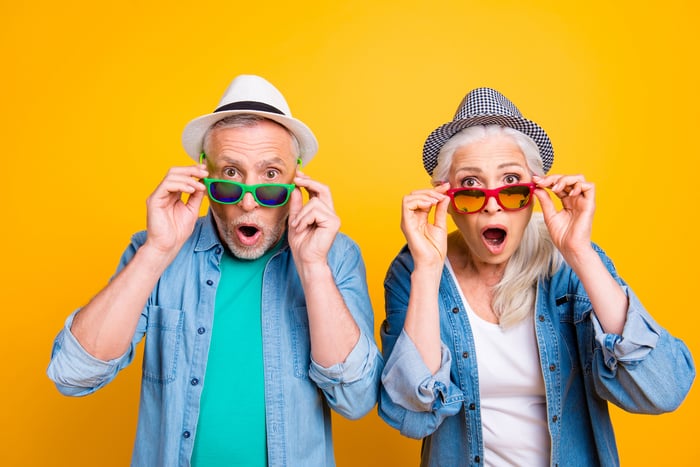 Snapchat is closing the gap, however, and doing so in a way that could chip away at the two titans' dominance in the social media space.

First (though not foremost), eMarketer's forecast suggests Snapchat will end this year with an average of 293 million monthly users, up 14.3% from 2018's tally of 256.4 million. The growth isn't expected to stop there, however. While the pace of progress should slow down between now and then, eMarketer predicts the app will add users every year through 2023, when it should finish with a monthly user count of 356.3 million.

That's not the part of the outlook that should trouble Twitter and Facebook, though. The forecast also predicts Snapchat will slowly but surely garner more market share among all social media users. Snapchat is estimated to serve 9.9% of all social networking users now, but is projected to expand that reach to 10.4% by 2023.

Both are still fairly small figures, but any progress Snapchat makes on that front is an opportunity lost by its rivals in the same space.

Perhaps more alarming than a deeper penetration of the social networking market is who Snapchat is expected to bring into the mix. The 18- to 24-year-old crowd has been and will continue to be a weak age bracket for user growth. Teens and tweens are also losing interest altogether. The platform's big user growth driver through 2023, incredibly enough, will be people between the ages of 25 and 54. Their ranks should swell by double digits this year, led by a 12.4% increase in 45- to 55-year-olds. Although their growth will cool to single digits beginning next year, 35- to 44-year-olds are still the app's top long-term growth opportunity. Past that, the 65-plus crowd is an increasingly important growth segment for Snapchat, expected to increase no less than 4% in any year between now and 2023. Go figure.

Hitting the sweet spot at the right time

A couple of key shifts are underway, however, that put Snap in the right place at the right time.

First, the millennials that largely grew up using the wireless web and are comfortable with making online purchases are now -- as a group -- reaching their high-earnings years. The median household income of $78,368 for 35- to 44-year-olds, in fact, has started to catch up with household incomes reported by 45- to 55-year-olds, according to Census Bureau data from Advisor Perspectives. That particular cohort is expected to drive more user growth than any other for Snap over the course of the coming years.

The second shift: Although the 65-plus crowd may have small annual incomes and are dependent on modest Social Security checks, they also tend to have smaller outlays (houses are owned, Medicare takes care of most health expenses, etc.). They've got some excess income, and SeniorWorld.com says more than half of them actually do shop online.

It seems odd at first that the app best known for adding digital decorations to pictures could attract older, higher-income adults and turn them into shoppers. But that's what the data and eMarketer's forecast suggest.