Based on his superlative track record, following Warren Buffett into a stock can hardly be described as a bad idea. However, not all investments are created equal, and there's a case for private investors to ignore one of Berkshire Hathaway's (NYSE:BRK.B) (NYSE:BRK.A) lesser-known holdings, namely Axalta Coating Systems (NYSE:AXTA). Finding an under-the-radar Buffett stock is a beautiful idea, but in this case, it probably doesn't make a whole lot of sense to follow the leader. Here's why. 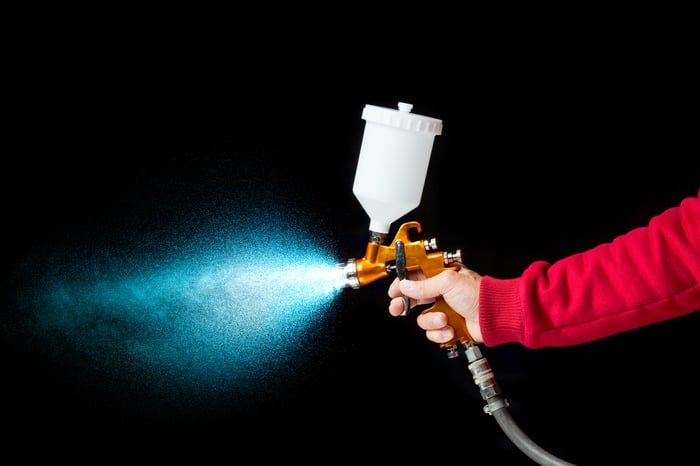 Axalta is one of the smaller players in the global coatings sector. The company's main focus is on the automotive market, supplying both the original equipment manufacturer (OEM) and refinish markets. Within its transportation coatings segment (38% of sales), management claims to be the second-largest player in the global light vehicle transportation coatings market and the leading supplier to the North American heavy-duty truck market.

Meanwhile, in performance coating (62% of sales), the company is the leading player in the refinish market (which tends to be less cyclical than the automotive OEM market) and the second-largest player in the industrial coatings market. Other leading players in the market include PPG Industries (NYSE:PPG), Sherwin-Williams (NYSE:SHW), and Akzo Nobel (OTC:AKZOY).

Here's a quick summation of the sales trends in the third quarter so you can see how Axalta generates revenue. For reference, the performance coatings segment has roughly double the margin of transportation coatings -- which is good news, because the refinish market is less cyclical.

However, growth in the refinish market wasn't enough to send overall sales higher. Whichever way you look at it, it's clear that the marginal difference in the company's prospects will come from light vehicle OEM coatings and industrial coatings. I'll come back to this point in a moment.

Another key point to note is that Axalta's management is currently reviewing "strategic alternatives." Management is open to a potential sale, and the company has been subject to continual takeover speculation. Indeed, PPG is reportedly looking at making an offer, and Akzo Nobel and Axalta previously discussed a merger in 2017, while private equity firms are also believed to be circling the company.

So with the takeover buzz and Buffett behind the stock, what is there not to like about it?

Three reasons not to buy the stock

I have two arguments.

First, it's never a good idea for private investors to buy a stock buoyed by takeover speculation that they wouldn't ordinarily hold. You are effectively trading against people who might be much more informed than you about a key corporate matter such as a takeover bid.

Moreover, If a bid doesn't transpire, you will be left holding a stock you might not want, and Axalta isn't a particularly cheap stock. The following chart compares its enterprise value (market cap plus net debt) to earnings before interest, tax, depreciation, and amortization (EBITDA) with a collection of automotive suppliers -- reflecting its exposure to automotive OEM -- and also a couple of auto parts retailers, O'Reilly and AutoZone -- reflecting its automotive refinish exposure.

As you can see, you can buy automotive suppliers on much lower valuations, and if you want, you can buy the high-valuation-but-recession-resistant auto parts retailers. 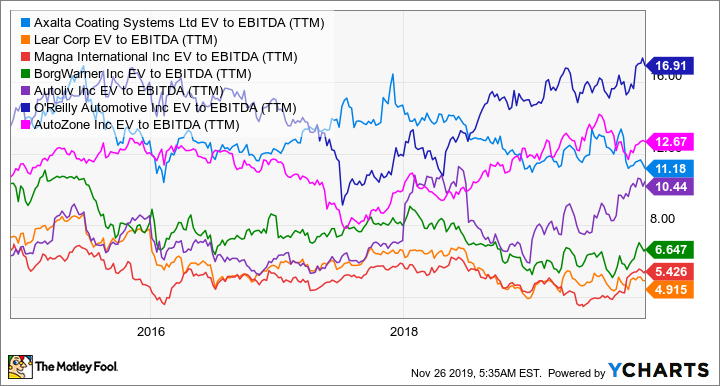 Second, you are not Warren Buffett! Of course it makes sense to follow a legendary investor like Buffett, but the fact is that with Axalta, Berkshire Hathaway owns slightly more than 10% of the company, and Buffett's word carries huge influence over the market. In other words, Buffett is in a position to guide what happens with the stock, particularly with regard to a takeover, but you are not. He gets to have a huge influence on whether the company is sold and at what price, but you do not.

Is Axalta a buy?

All told, I think the answer is no, at least it's a no right now. Axalta operates in an integral part of the economy and, at some point, light vehicle production will surely stabilize and start to grow again while the automotive refinish market has solid growth prospects.

That said, there are better value stocks with which you can get automotive exposure right now, and the stock is arguably being supported by takeover speculation that may or may not occur.