Shopify (NYSE:SHOP) provides a technology suite that allows merchants to set up an e-commerce sales channel with relative ease and efficiency. Since the company's 2015 IPO, it has averaged more than 70% annual revenue growth and achieved 47% expansion over the most recent nine months, which is an impressive feat since the amount of revenue required to sustain that growth rate increases over time. Today, the platform boasts more than one million users.

Shopify delivers an extremely valuable solution at a perfect time

The retail industry has spent the past 15 years shifting to the e-commerce channel, with online sales growing from 4% to 11% of total retail sales over the most recent decade. This growth is especially impressive because approximately 60% of all retail sales are generated by the likes of car fuel, auto parts, food & beverage services, groceries, alcohol, and building materials, which are less likely to be sold online.

FreshBooks estimates that 15 million Americans are self-employed, and that number is expected to rise to 27 million by 2020, indicating a growing appetite for small business ownership. Shopify's target users are small and medium-sized businesses that lack the resources or desire to build an e-commerce platform internally. The number of these businesses is proliferating at the exact time as consumer demand for e-commerce channels is increasing. 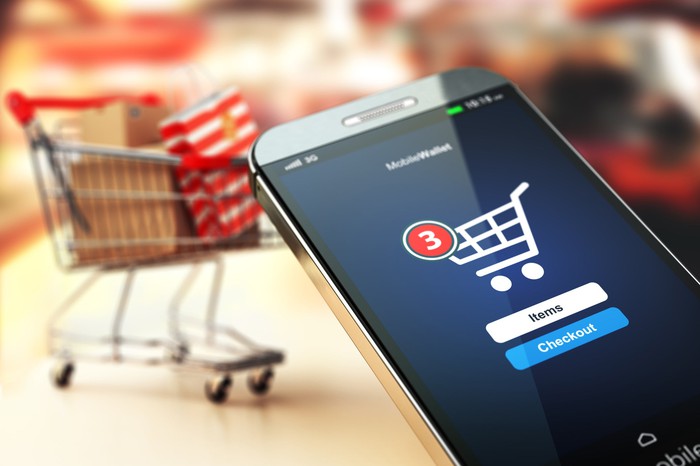 Shopify contends directly with Amazon (NASDAQ:AMZN) for a substantial portion of its business, which appears to be a major disadvantage for the much smaller Shopify, and is a valid criticism in many ways. However, Shopify has a different value proposition than other e-commerce players. While Amazon provides a broad reach for third-party sellers on its site, Shopify allows for more autonomy in marketing, branding, pricing, and supply chain on subscribers' own websites. This is increasingly appealing as more vendors seek to improve profitability and pricing by selling directly to consumers, cutting out the middle man that has traditionally existed in retail as either a physical store or an online marketplace.

Shopify has never delivered net profits for a full year because it continues to invest heavily in growth. Operating and net losses widened in the most recent quarter, due to increasing expenses in several line items—especially research and development. Hiring, increasing marketing efforts, and developing new products are all important parts of maintaining high growth rates, so Shopify is clearly prioritizing expansion over profitability, which is common for companies at this stage.

Nonetheless, its higher-than-expected losses caused some concern among investors, which caused share prices to drop. Moreover, growth is bound to slow down over time as low-hanging fruit runs out and the user base grows. At the very least, customer acquisition costs will eventually rise once the early movers and easily acquired customers are already on board, which will lead to either margin compression or slower growth.

Shopify trades at 24.8 times its sales. Supposing for a second that the company could very quickly deliver a 10% net margin — double that of Amazon — on its current sales figure, the stock's price-to-earnings ratio would still be 248. If Shopify's sales doubled at that same 10% net margin, with a forecast annual earnings growth rate of 40%, the company's current valuation would still result in a PEG ratio of 3.1, which is very high. It is without question that a substantial amount of stellar performance is already calculated into the current stock price.

As long as there are no marketwide downturns and Shopify continues to deliver impressive growth without any major increases in net losses, its stock will likely return to growth in the short term. At some point, its fundamentals will have to catch up with its valuation, and a substantial pullback will be likely. It is easy to love the Shopify story, but investors ultimately have to respect valuation and implied performance at market prices. It could be prudent to steer clear of this name for anything besides the shortest and longest-term positions.