VMware (NYSE:VMW) reported third-quarter earnings after the market closed on Tuesday, and the virtual-machine software specialist delivered sales and earnings results that came in significantly ahead of the market's expectations -- at first glance. Revenue for the period rose roughly 12% year over year to come in at $2.46 billion, ahead of the average analyst sales target of $2.41 billion. Non-GAAP (adjusted) earnings per diluted share came in at $1.49, which was down roughly 4.5% year over year but topped the average analyst estimate's call for $1.43.

Analysts including those at KeyBanc raised their targets on the stock from $175 to $182, and an analyst at Citi raised its price target from $183 to $198.

VMware stock posted gains shortly following the release and analyst price hikes. But these gains quickly reversed, and the stock closed down about 2.4% in the day of trading on Wednesday following the release. The market appears to have realized that the analyst targets that VMware beat were only for the core business -- and had not factored in the contribution from the company's Carbon Black acquisition. Investors may have also reassessed the company's guidance.

Here's a deeper look at three points from the company's third-quarter results, outlook, and earnings call. 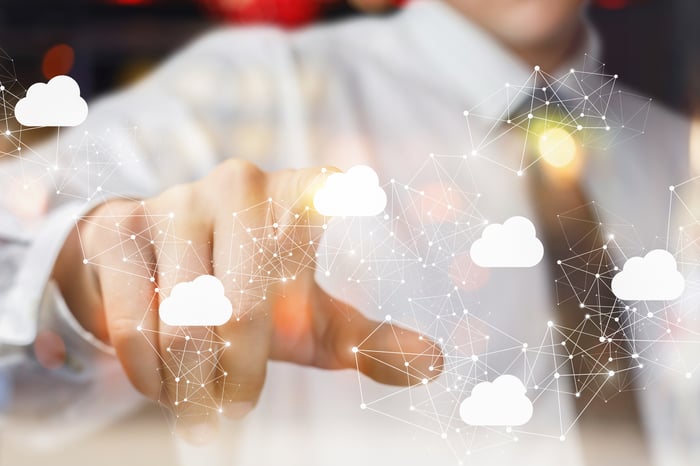 1. Setting the acquisitions and services story at VMware straight

Carbon Black is a cloud-native endpoint protection specialist that VMware acquired in a $2.1 billion deal that was announced in August. VMware also initiated its acquisition of cloud-software developer Pivotal for $2.7 billion in August, and that deal is expected to close before the year is out. These moves are set to play a big role in accelerating the company's move away from on-premise solutions and into cloud-based services.

Carbon Black, together with the security-driven value-add from our networking with micro-segmentation, end-user computing, cloud and compute offerings, in aggregate represents approximately $1 billion of business for us this year. With this acquisition, we launched a new security business unit, including Carbon Black and our AppDefense offerings under the leadership of former Carbon Black CEO, Patrick Morley, as general manager. Since the close of the acquisition, we announced multiple new Carbon Black Cloud solutions and an enhanced partnership with Dell making Carbon Black Cloud the preferred endpoint security solution for Dell commercial customers. We believe the combination of Carbon Black and VMware will bring a fundamentally new paradigm to the security industry.

Even with a relatively small contribution from Carbon Black in the quarter, hybrid cloud and software-as-a-service (SaaS) revenue climbed 40% year over year to account for 13% of overall revenue. Total services revenue grew roughly 10% year over year to $1.48 billion.

2. The company is gearing up for another big transition

Building out its cloud-delivery and cybersecurity offerings isn't the only big initiative taking place at VMware. The company is also working to build its position in Kubernetes. The open-source container system was originally designed by Google and appears to be on track to become the new standard for a range of server virtualization and container management applications.

Kubernetes is a platform for sharing and accessing private applications and workloads, but it differs from traditional virtual machines in that an underlying operating system can easily be shared between these apps. This makes shared software systems simpler to develop, launch, and update, in addition to a range of other versatility and performance advantages. These characteristics make it especially well suited for projects using hybrid-cloud architecture -- and an important product competency for VMware.

The company unveiled VMware Tanzu (a suite of programs to help enterprises manage applications on Kubernetes) during the third quarter, and it's in the process of shifting its vSphere server virtualization software to the open-source platform.

"This is like the magic bridge between those two worlds," said Gelsinger when discussing the benefits of Kubernetes and having virtual machines and containers accessible on the same management platform. "And literally the millions of people that operate VMware environments today are becoming Kubernetes-enabled tomorrow."

Gelsinger also said that he believes that Kubernetes is the most important technology he's seen since Java or the virtual machine itself.

3. The sales outlook, minus Pivotal

VMware projects that fourth-quarter license revenue will climb 13% year over year to reach $1.39 billion, and that total revenue for the period will rise 13.8% to hit $2.95 billion. Non-GAAP earnings per share for the period are expected to come in at $2.16.

Hitting those fourth-quarter targets would bring the company's full-year revenue to $10.1 billion, up 12.5% year over year, with adjusted earnings of $6.58 per share -- up from $5.19 per share last fiscal year. The company expects free cash flow for the current fiscal year to wind up at $3.57 billion after accounting for acquisitions and integration costs, up from $2.95 billion last year.

Management also issued guidance for next fiscal year, with the note that it didn't include any expected impact from the Pivotal integration. Here's Gelsinger breaking down what shareholders can expect in terms of sales growth and segment and product contributions:

Now as we look to our next fiscal year, we're expecting the strength we're currently seeing in the business to continue. Preliminarily, we're planning for a fiscal '21 total revenue growth rate in the low double digits, not including the impact from the proposed Pivotal acquisition. We also expect hybrid cloud subscription and SaaS to drive much of the future growth of the business and show a significant increase in its percentage mix of total revenue.

The company expects that investment in its hybrid-cloud subscription and SaaS businesses and the integration of Carbon Black will significantly boost operating income but hurt operating margin by up to 2 percentage points next year.