In retrospect, consumers liked the idea of meal kits more than they liked meal kits themselves. Letting someone else prep a healthy, home-cooked meal sounds nice, but it's just not the way modern America eats or even lives.

The rise and (near) fall of meal kits did do one thing for grocers, restaurants, and even convenience stores though: It confirmed that there's a market for quick, convenient, reasonably healthy, portable meals. That clarity has better defined the so-called grab-and-go sliver of the food market.

Now that it's more gelled, look for this concept to be wielded as a weapon in the next era of grocery wars. And look for Amazon (NASDAQ:AMZN) and Kroger (NYSE:KR) to lead that shift by, first and foremost, sparring with one another in a way that could differentiate both from their bigger grocery competitor, Walmart (NYSE:WMT). 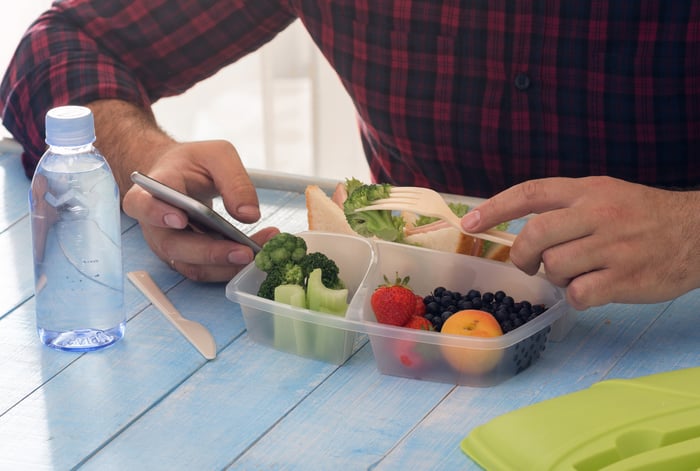 The market may be well defined even if a meal's makeup isn't. A grab-and-go option could be anything from a restaurant's meal in a compartmentalized box to a premade garden salad bought from a grocer to a yogurt parfait purchased almost anywhere.

Speed is the key. As Rick Stein, vice president of fresh foods for Food Marketing Institute, told Retail Dive this month: "Our consumers said that if they can't make a decision, get in and out within 15 minutes, you have not met their needs for lunch. And that means from the minute they're trying to make the decision to the minute they've left, you've got to figure out a way to prepare it, serve it to them and get [them] out."

The newly gelled category presents something of a conundrum for grocers, however, which is that all sorts of retail venues can offer quick, convenient choices, posing a threat to grocery stores that have generally dominated the space. Panera and Dunkin' Brands are running pilot programs that cater to people in a hurry. Much of the early success produced by Amazon Go -- the hyper convenient food shopping venues operated by Amazon -- was driven by grab-and-go meals.

Even more conventional convenience stores (that sell gasoline) are jumping on the trend. Though not necessarily driven entirely by grab-and-go offerings, a recent study performed by the National Association of Convenience Stores found that food service now makes up 23% of total convenience store revenue, versus only 20% five years ago. More than half of all Americans purchase a meal from a gas station at least once per month now.

Point being, grocers aren't just competing with other grocers now. Any food retailer with a grab-and-go option is a threat, at least partially explaining last year's 1.1% revenue decline for the nation's traditional grocery sector.

Consumers have spoken, and some grocers listened

It's a battle the United States grocers are positioned to ultimately win, of course, for one overarching reason: They have the most access to the most food, and arguably the deepest repeat relationships with consumers. Though we're grabbing and going more often, a recent Gallup poll indicated 83% of Americans still visit a grocery store at least once a week. Simultaneously, FMI's recent Power of Foodservice report indicates that ready-to-eat items are of interest to 68% of shoppers, topping heat-and-eat items at 63%. Hot and cold buffets, made-to-order food stations, and restaurant-style seating are all less compelling to consumers.

This is a trend directly addressed by Amazon Go, of course, and it would be surprising if Amazon's planned grocery stores didn't meet all sorts of consumer needs. Each visit adds to the digital profile Amazon has been building on each and every customer it serves.

If you think Kroger is content to simply sit back and let new consumer demands go unaddressed, though, think again. In September, it opened a food hall at a grocery store near its Cincinnati headquarters featuring five different restaurants. Although this sit-down fare seems to blow past the very point of grab-and-go, it would be easy for Kroger to dial back this pilot and bring simpler portable meal solutions to more stores. In fact, the restaurant-laden store makes a point of featuring a variety of grab-and-go options for lunch as well as dinner. In the meantime, Kroger stores already offer a quick grab-and-go breakfast.

As for Walmart, it too is in the grab-and-go business, though its selection is mostly limited to pre-packaged fare that isn't quite considered a complete meal and isn't freshly made by hand. For now anyway, the market may be too labor-intensive for Walmart stores, which must also handle general merchandise.

Set to become a two-horse race

The grab-and-go phenomenon isn't quite in its infancy, but it's still new enough that analysts and the food retailers in the space still aren't entirely sure what makes it tick. It's also tough to pin down its value. The healthy-snack market is something on the order of a $30 billion industry, while the chilled and deli food market is worth more than $200 billion per year. For perspective, U.S. restaurants collectively do nearly $900 billion in annual sales, while grocery stores drive roughly $700 billion in yearly sales. The grab-and-go segment of all that is still to be determined.

Whatever the figure is, it appears Amazon and Kroger are the names deep-pocketed and interested enough to lead the rest of the grocery pack in the race to those dollars. If they're smart, they'll use the grab-and-go movement as a means of differentiating themselves from all the others -- including Walmart -- and from each other.