The market's rolling into the holidays, so it's not a shock to see so many stocks at the top of their game. There were more than 680 stocks on the major U.S. exchanges hitting new 52-week highs last week, more than three times the number of equities hitting fresh lows. Some of the winners may surprise you. 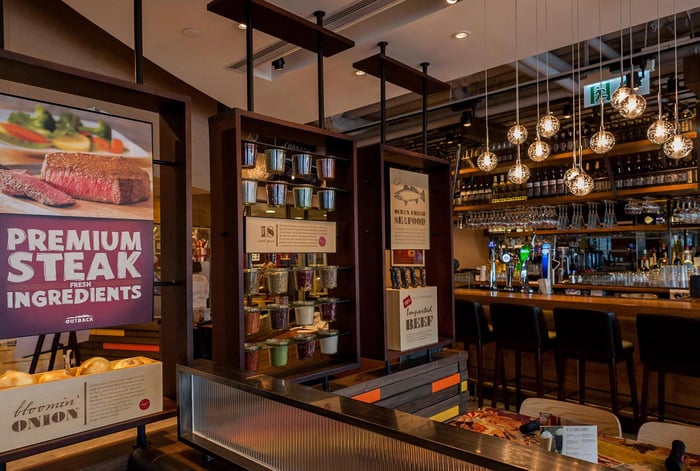 Casual dining has been hit or miss -- or feast or famine -- for investors, and the parent company of Outback Steakhouse has been the former instead of the latter. The restaurant operator hit another 52-week high on Black Friday, a refreshing development since Bloomin' Brands isn't growing as quickly as it used to.

Comps at Outback Steakhouse have been positive for 11 consecutive quarters in the U.S., but the 0.2% gain in its latest quarter is barely keeping that streak alive. Comps across all of its U.S. restaurants actually dipped 0.2% for the third quarter, as overall results were held back by a 2.2% decline at Bonefish Grill.

There are still a couple of reasons for optimism. For starters, Bloomin' Brands' bottom line is growing faster than its revenue gains. Adjusted earnings climbed 25%, overcoming the flattish top-line results. The restaurant operator is finally joining many of its peers in the delivery market, leaning on third-party providers. Bloomin' Brands launched on DoorDash this fall, kicking things off in late September with a novel 50,000 steak giveaway. Bloomin' Brands also recently announced that it's exploring strategic alternatives, a move that leaves outsiders speculating as matchmakers. In short, ho-hum growth on the top line is never the full story.

There's no denying that investing in China stocks has been volatile since trade tensions with the U.S. started escalating last year. There are still some growth stocks that have been resilient, and that includes NetEase. It's wrapping up what should be its 12th consecutive year with double-digit revenue growth, a surprise only because Chinese regulators were cracking down on online gaming last year.

NetEase soared two weeks ago after posting better-than-expected results, as revenue and adjusted earnings from continuing operations rose 11% and 74%, respectively, in the third quarter. Wall Street can't seem to get a good read on NetEase, and that's just fine for the bulls. NetEase has landed comfortably ahead of analyst profit targets over the past year, and the pace of those double-digit percentage beats has accelerated over the past four quarters.

These aren't the easiest of days for car-related companies. Buyers are hesitant to commit to big-ticket vehicles even with the economy playing along, and there's also the trend shifting away from the auto ownership, particularly with younger drivers. Copart's thriving in this climate as a leading auctioneer of salvage and clean title vehicles. It's coming off consecutive quarters of better than 20% top-line growth, something it has done only one other time over the past decade.

Copart's latest quarter was another beauty, far from the totaled vehicle wrecks it sells for scrap, parts, or rebuilding projects. Revenue rose 20% with adjusted earnings per share soaring 38%. The auto industry itself can be cyclical, but Copart enters fiscal 2020 on cruise control after four consecutive years of double-digit growth on the top line.

Why Is Everyone Talking About NetEase Stock?