Buying growth stocks in December is generally a good idea. Because of the so-called "January effect," growth stocks -- especially those in the small- to mid-cap realm -- tend to enjoy a nice bump early in the new year.

Which growth stocks should investors have on their radar heading into 2020? Clovis Oncology (NASDAQ:CLVS), Exelixis (NASDAQ:EXEL), and Sorrento Therapeutics (NASDAQ:SRNE) are three growth-oriented biotech plays worth checking out right now. Here's why. 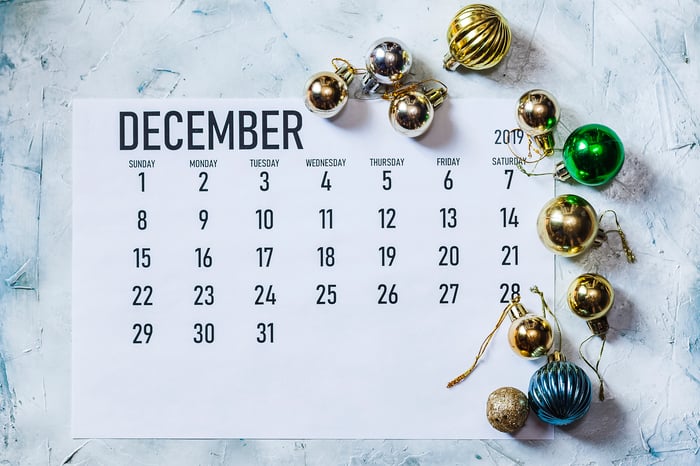 This stock has a lot more room to run

Clovis' stock has gained an astounding 350% over the past 30 days. Even so, this small-cap cancer-focused company still comes across as grossly undervalued, for two well-defined reasons.

First off, Clovis' advanced ovarian cancer drug, Rubraca, has an excellent shot at adding another high-value indication to its label in late 2020 -- namely, BRCA-mutant advanced prostate cancer. Rubraca's sales, in kind, should be able to top $700 million as early as 2023. That's an enormous commercial opportunity for a company with a sub-$1 billion market cap.

Second, Clovis arguably stands out as a top buyout candidate heading into 2020. The oncology space has historically been a hotbed of merger and acquisition activity, and GlaxoSmithKline's $4.1 billion acquisition of Tesaro for its rival ovarian cancer treatment, Zejula, may have put a spotlight on Clovis. Clovis, after all, could probably be acquired for a considerably lower price tag than Tesaro.

In all, this underappreciated oncology play appears primed to extend its recent rally well into the new year. In fact, it wouldn't be shocking in the least if this small-cap cancer stock tripled in value before running out of steam.

Exelixis' stock could surge in 2020

Despite a string of clinical successes for its flagship cancer med, Cabometyx, and drastically improving fundamentals as a result, shares of mid-cap cancer-focused company Exelixis have essentially traded sideways over the past three years. Next year, however, could prove to be an entirely different story.

Why should investors circle back to this name in 2020? Cabometyx's kidney cancer sales have underperformed expectations this year, thanks to recent combo therapy launches from Pfizer and Merck, but Exelixis could have an answer to this key headwind. In early 2020, the company is set to unveil top-line data from a pivotal trial evaluating Cabometyx plus Bristol-Myers Squibb's Opdivo in first-line kidney cancer.

As part of a potent kidney cancer cocktail, Cabometyx could regain a good portion of its lost market share in the front-line setting. That's not to say this upcoming data release will be a surefire slam dunk, but there is a solid scientific rationale underpinning the use of these two agents in front-line kidney cancer. A positive top-line readout, combined with an acceptable safety profile, could thus light a fire under Exelixis' shares early in the new year.

Sorrento, a small-cap immunotherapy and pain management company, has more than doubled in value over the past two weeks. What triggered this eye-popping jump in the company's shares? Toward the tail end of November, Sorrento announced that it had rejected two unsolicited tender offers, ranging from $3 to $5 per share. Sorrento's board of directors reportedly determined that the offers "significantly undervalued the company."

What might be next in this developing story? Members of Sorrento's management stated in the wake of these buyout rumors that they're more interested in licensing deals or partnerships to maximize the value of their current lineup. But that doesn't mean the door has slammed shut on a buyout. Rather, this partnership and licensing talk could turn out to be a way to create leverage in buyout negotiations.

The fact is that Sorrento does sport some compelling clinical candidates from a commercial standpoint, but it's a long and risky road toward the finish line. A buyout, therefore, is unquestionably the smart play for Sorrento and its shareholders. It would bring an immediate windfall for stakeholders, while eliminating the enormous risk associated with clinical studies. So with a potential buyout premium lurking, risk-tolerant investors might want to snap up some shares of this speculative growth stock soon.