The fallen industrial giant that's trying to turn itself around versus the high-yielding-but-low-growth telecom behemoth. The answer to the question of General Electric (NYSE:GE) versus Verizon Communications probably lies as much in your personal investment preferences as it does in the absolute merits of these companies. Let's take a closer look at the case for each stock. 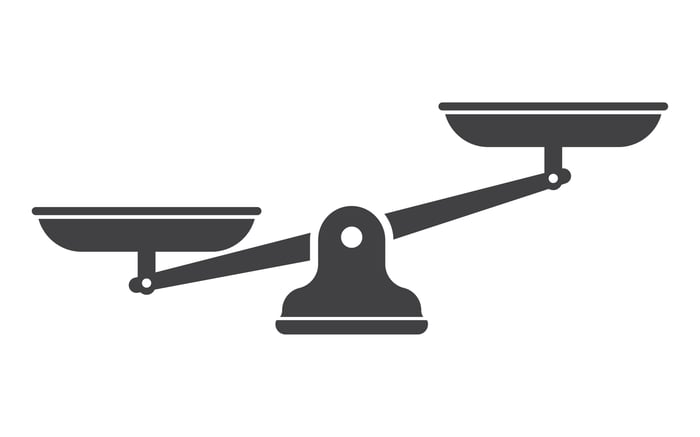 In a nutshell, the telecommunication providers can be seen as low-growth utility-type stocks whose prospects will be guided by interest rate movements. In other words, as interest rates go up, their stock prices could come under pressure as their dividend yields become relatively less attractive with higher rates and vice versa.

How do I draw this conclusion?

First, let's start by looking at revenue growth in order to check Verizon's track record. Unfortunately, as you can see in the table below, Verizon and its closest competitor, AT&T, are not businesses from which you can expect anything more than low-single-digit top-line growth. This might sound all right, but note that if a company isn't growing at a higher rate than inflation, it's losing money in a real sense.

However, a quick check across the industry shows relatively stable margin. 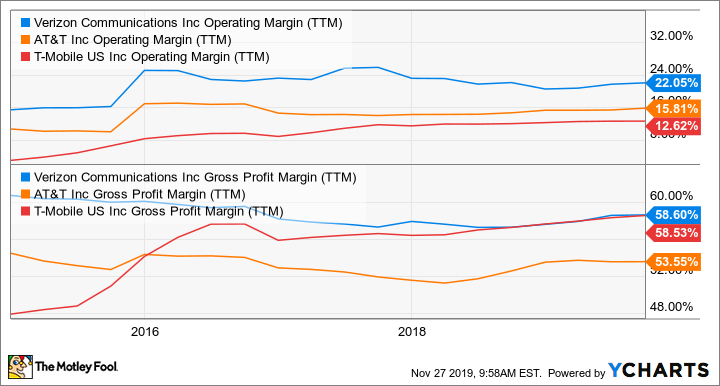 And neither AT&T nor Verizon has been able to do anything to improve return on assets or FCF from assets in the last decade. 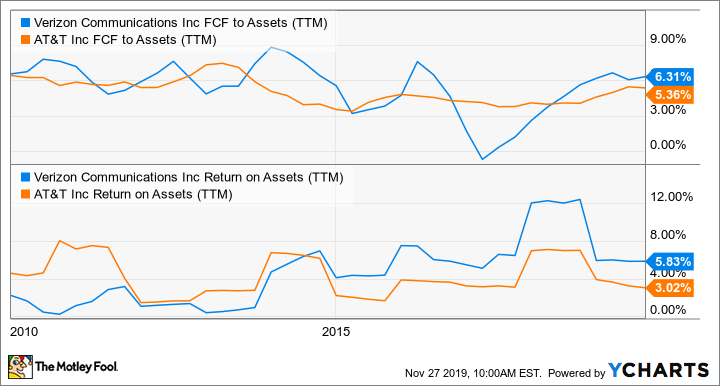 Indeed, this is exactly what you might expect from an industry with 1% churn rates -- a measure of how many customers leave compared to the amount at the start of the period. In other words, it's not a highly dynamic industry that's going to see dramatic shifts in customers, meaning there's little Verizon can do to boost growth.

Simply put, Verizon and AT&T are businesses struggling to grow revenue and earnings in excess of inflation, let alone GDP, so don't expect significant growth in dividends in the next decade or so. On the other hand, a 4% dividend yield from Verizon might suit you for a decade or so if you think interest rates will remain low.

Having looked at General Electric's valuation recently and concluded that $12 was a pretty fair valuation for the stock (less if you factor in an industrial conglomerate discount), it's hard to conclude that the 5.5% upside potential from the current price of $11.40 makes GE a raging buy. However, there are potential upside (and downside) possibilities to GE's future prospects.

The two most important big-picture questions with GE -- assuming the Boeing 737 MAX returns to service and GE's joint venture, CFM International, can sell its LEAP engines on the plane -- are as follows:

Clearly, a positive answer to both these questions relies on ongoing global growth. After all, if passengers aren't flying, airplanes won't get flown, and aircraft won't get serviced and parts won't get replaced -- which is how GE really makes money from aviation. Similarly, demand for power is correlated with economic growth.

Regarding airline profitability and gas turbine versus renewable energy, here are a couple of charts that might help investors decide. First, it looks like it's going to be another good year for aviation passenger growth, and the decade-long turnaround in airline profitability looks ongoing. 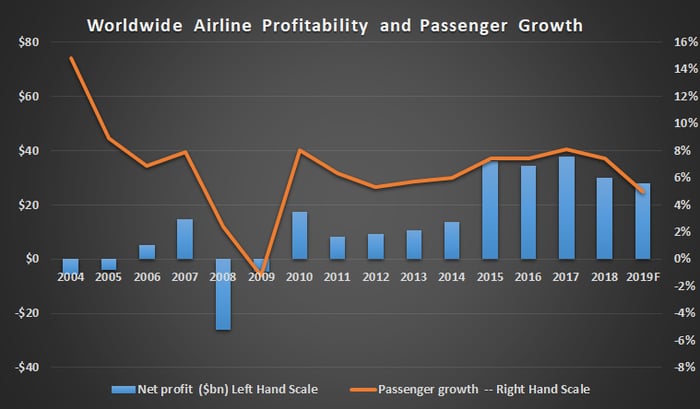 Turning to gas turbines, here's a chart of electricity generation by source in the U.S. As you can see below, renewables and gas are benefiting from the declining use of coal, and if this trend continues and is replicated on the global stage, it's likely that gas turbine equipment and services demand will improve over time. 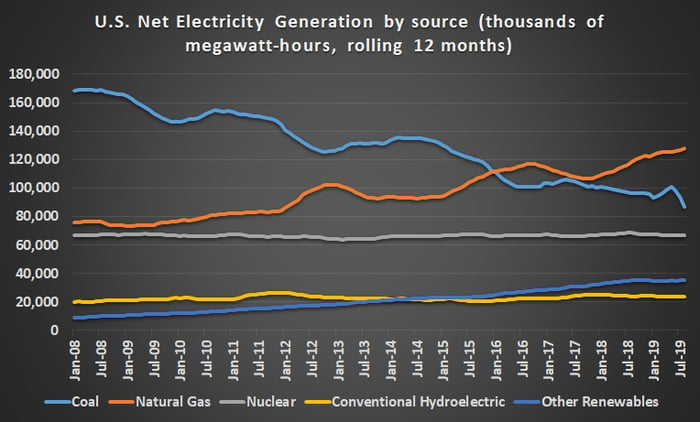 Frankly, there's no need to buy either, but if forced to choose one, I'd pick GE. The telecom giant's 4% dividend yield will attract many, but its lack of growth is an issue. Moreover, a rising-interest rate environment will quickly make Verizon's stock look a lot less attractive.

GE's stock looks close to fair value right now, but if commercial aviation can remain strong and gas turbine demand can come back, at least there's some upside potential to the stock. On a risk/reward basis, GE is better.