Electronic-signature pioneer DocuSign (NASDAQ:DOCU) will issue its fiscal third-quarter 2019 earnings report on Thursday, Dec. 5, after the markets wrap for trading. The tech-dynamo's shares have soared by 74% year to date as investors have warmed to its growth prospects beyond its core e-signature offering.

Below, let's review four key components of Thursday's report that are likely to impact the market's reception of the filing.

DocuSign's third-quarter guidance, issued last quarter, anticipates revenue of between $237 million and $241 million. At the midpoint of this range, the company will achieve a growth rate of 34% over the $178.4 million in revenue booked in the third quarter of 2018.

The company is likely to meet its gross-margin benchmark, given stable costs of sales. But investors should note that DocuSign has handily exceeded its own top-line guidance in the last few quarters and thus, even a slight miss on third-quarter revenue expectations could pressure shares in Friday trading.

Management has penciled in billings of $260 million to $270 million for the third quarter, which, at the midpoint, will represent a year-over-year growth rate of 33.8%, tracking very close to the organization's projected rate of revenue expansion.

"Billings" can be confusing as its reporting application differs slightly from company to company. I always find it useful to pin down how a given software-as-a-service (SaaS) corporation defines this term. The following is DocuSign's clarification from its most recent quarterly filing:

We define billings as total revenues plus the change in our contract liabilities and refund liability less contract assets and unbilled accounts receivable in a given period. Billings reflects sales to new customers plus subscription renewals and additional sales to existing customers. Only amounts invoiced to a customer in a given period are included in billings.

DocuSign's billings can exhibit volatility on a sequential basis, and the metric has had an outsize impact on its stock price in the preceding two quarters. In the first quarter of fiscal 2019, shares sold off when the company reported relatively tame 27% year-over-year billings growth, only to rally in the second quarter when billings soared by 47%.

As I discussed last quarter, management would prefer that investors analyze billings on a rolling basis and avoid getting too caught up in a single-quarter's total. Over the last four quarters, year-over-year billings growth has averaged 36.25%, which puts the third-quarter target of roughly 34% in perspective. 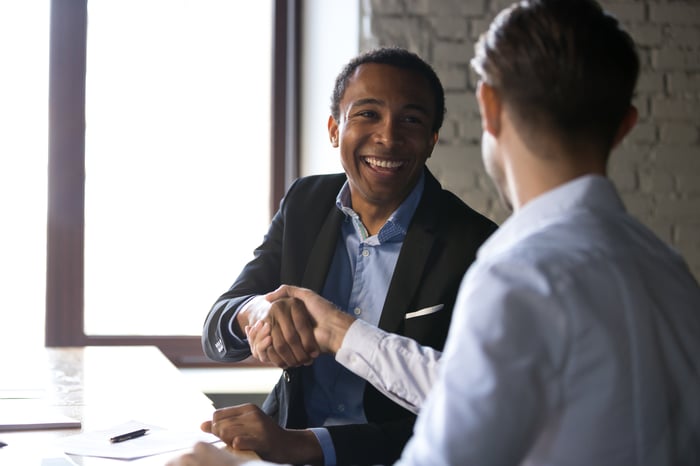 Like many of its peers, DocuSign has embraced the "land and expand" sales model common to SaaS companies that boast multiple-use cases for their products. In this model, management targets a wide range of companies, from small- and medium-sized businesses (SMBs) to sprawling enterprise customers. Often, the objective in a new relationship is to sell a single product (in this case, the company's flagship "DocuSign e-Signature" software) with the aim of offering ancillary services in the future.

Given such a wide net cast for new business, the brute-force acquisition of customers is a useful metric to gain visibility into DocuSign's future sales strength. Over the last four trailing quarters, the company has increased its customer base cumulatively by 25%, to 537,000 customers. Signings accelerated in the first and second quarters of the 2019 fiscal year, as the organization added 31,000 and 29,000 customers in these reporting periods, respectively, after averaging 24,000 additions in the third and fourth quarters of fiscal 2018.

Look for DocuSign to maintain its new-customer mojo in the third quarter, with acquisitions likely to fall in a range of 27,000 (the average of the last four trailing quarters) to 31,000 (the peak expansion reached in fiscal Q2 2019).

Investors who follow DocuSign closely know that the company is attempting to propagate the idea of a "system of agreement," or SOA, in the minds of corporate managers and decision-makers. An SOA represents a structured approach to originating every conceivable type of agreement between a company and its employees, customers, vendors, and other corporations and third parties.

DocuSign wants its suite of cloud-based software tools that facilitate agreement planning, execution, and administration (which it's dubbed the "Agreement Cloud") to become a standard resource for corporations that want to implement an SOA. The company hopes to gain traction with entities that are already accustomed to investing in single platforms for overarching systems like enterprise resource planning (ERP) and customer relationship management (CRM).

DocuSign launched the Agreement Cloud in the first quarter of the current fiscal year, and management discussed several qualitative examples of its early success and potential on last quarter's earnings conference call. With another quarter of sales completed, management is likely to share more specific information -- and hopefully, quantitative data -- on the Agreement Cloud and its contribution to the company's overall growth rate when earnings are unveiled on Thursday.