2019 has been a rotten year for Abiomed's (NASDAQ:ABMD) investors. Shares of the temporary heart pump maker have fallen more than 40% since January in response to a slew of negative headlines. Meanwhile, Abiomed's revenue and net income have continued to grow. The combination has pulled the company's valuation down to the lowest level in years.

Is Abiomed a "bad news" buy, or are shares too risky to touch? 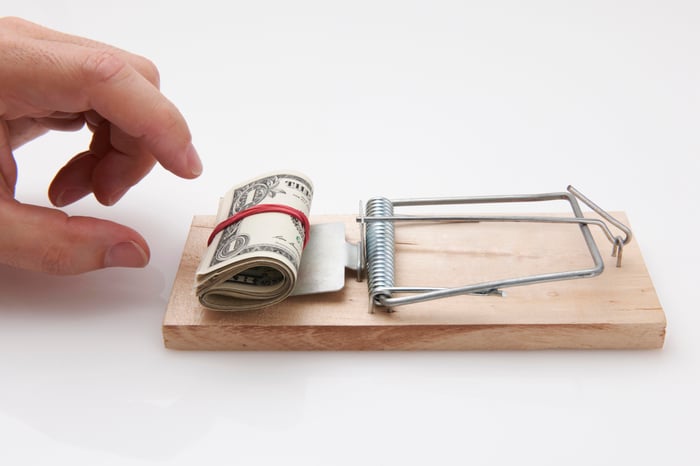 Abiomed's troubles started in February when the U.S. Food and Drug Administration sent a confusing letter to healthcare providers related to the company's Impella RP heart pump. The letter was worded in such a way as to make it seem like the company's heart pump wasn't safe. The media picked up the story and ran with it. Predictably, demand slowed considerably in response.

The FDA sent a follow-up letter to providers in May, stating that the Impella RP was safe and effective. Abiomed did its best to spread the word, but the damage had already been done. Abiomed's revenue growth rate slowed, forcing management to cut its full-year revenue guidance. Shares tanked in response.

The fallout from the FDA letter was bad enough, but the company was dealt another big blow in November.

During the American Heart Association's annual meeting, a pair of research teams called into question the safety and effectiveness of Abiomed's heart pumps. The teams analyzed health data from more than 48,000 patients who underwent angioplasty with mechanical blood flow support -- such as Abiomed's Impella and an older technology called an intra-aortic balloon -- at 432 hospitals between 2004 and 2016.

The research teams said Impella is "associated with an increased risk of death, bleeding, and stroke among patients undergoing angioplasty to reopen clogged arteries."

Specifically, researchers pointed out that 45% of patients who suffered from cardiogenic shock and were treated with procedures that utilized the Impella died. That was a much higher rate than the 34% of patients who received the intra-aortic balloon.

What's more, the researchers also stated that 31% of cardiogenic shock patients treated with Impella had major bleeding, which was far higher than the 16% for patients who were treated with the balloon.

Finally, the researchers highlighted the fact that using Impella adds an additional $15,000 to the average hospital bill.

Dr. Amit Amin, the lead researcher for one of the teams, said, "The associated clinical outcomes did not show any substantial improvement, while costs of hospitalization rose."

The data presented at the AHA meeting makes it look like using Impella leads to worse clinical outcomes at much higher costs. If that's proven to be true, then Abiomed's revenue, profits, and stock price could all fall precipitously from here.

However, it's possible that the data the researchers used was flawed.

Doctors don't use Impella on every patient who is admitted with cardiogenic shock; instead, it's possible -- and completely logical -- that they would only use Impella on the sickest patients with the worst prognoses. If that's the case, it would be impossible to accurately compare patients who received Impella instead of the intra-aortic balloon because the patient populations are so different.

Amin admitted this could be the case in the report, noting that it is "very hard to suss out" whether the patient populations were comparable. He also warned that "these results were not from clinical trials and therefore could have been influenced by other factors."

What's more, the company also highlighted data collected by Yale University showing that the use of devices like Impella to treat cardiogenic shock and other heart diseases "reduced costs by $45,000 and $54,000 per case, respectively, and reduced mortality by 58%."

It's not uncommon for high-profile news stories to call into question the latest and greatest medical technology.

In the early 2010s, a similar situation played out at robotic-surgery leader Intuitive Surgical (NASDAQ:ISRG). At the time, researchers, the government, and short-sellers all called Intuitive's da Vinci system and business practices into question. Concerns were raised about the safety and efficacy of the da Vinci system, and the media highlighted numerous product complaints, lawsuits, and marketing practices.

Intuitive's revenue and profit growth slowed considerably during this challenging period, and the company's share price was crushed. However, as time passed, the negative headlines subsided, and numerous published studies showed the da Vinci to be safe and cost-effective.

Sales growth and profits ultimately rebounded, and the troubled times actually proved to be a great opportunity to buy the stock. 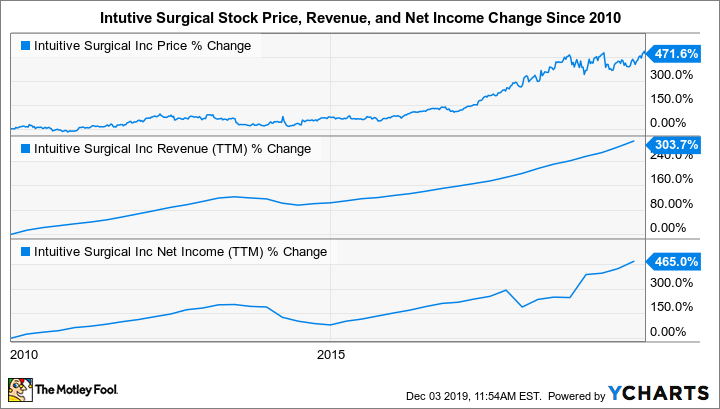 Could the same situation be playing out at Abiomed today?

Abiomed is a long-term buy

It's impossible to know what kind of impact these negative headlines will have on Abiomed's sales and profits, especially in the near term. The company is likely to remain in damage-control mode for the foreseeable future. It's also impossible to tell how physicians will react to the news. This is why investing in high-growth healthcare stocks can be so challenging.

However, the good news is that both issues that have rocked Abiomed's stock this year appear to be short-term headwinds that are fixable. What's more, Abiomed has continued to post revenue growth during these trying times, and it remains highly profitable. The company's debt-free balance sheet also puts the company in a great position to buy back its stock at a discount while it continues to advance its pipeline.

While anything can happen from here, my view is that Abiomed is fully capable of recovering from this rough patch and could emerge stronger than ever.

I've happily been adding to my position all year long. If you share my bullishness and believe that Abiomed's problems are completely fixable, then I'd suggest that you do the same.