It seems like year after year, investors are worried about bad weather undercutting the earning potential for Vail Resorts, Inc. (NYSE:MTN). Warming temperatures and weak snowfalls can dampen demand during the critical ski season, especially if travelers don't get good snow reports early in the season.

This year, the weather seems to be on Vail Resorts' side: Both Vail mountain and Whistler-Blackcomb are already open for the season. And with more snow on the horizon in the Rocky Mountains, it could be a great year for the ski business and Vail's stock. 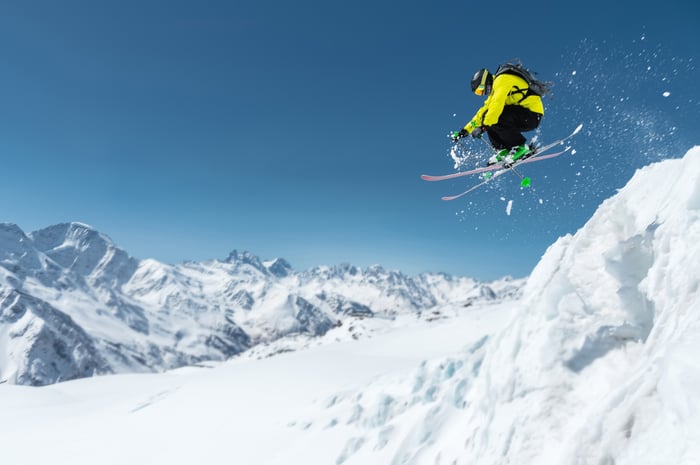 Why early snow is important

When Vail bought Whistler Blackcomb, it did so to build a network of ski resorts that spanned North America. That would make the company less reliant on a single state or weather pattern, as has typically been the case for ski resorts.

The company also bet that season passes offering entry to multiple resorts would smooth out earnings. Buyers could choose the resorts that had the best conditions but would be willing to give the company cash upfront to get cheap passes early in the season. That's why early snowfall is so important.

December 2 marked the last day Epic Passes were on sale, so customers had to make their decision early. Storms across the country over Thanksgiving weekend may have influenced those on the fence about buying a season pass.

Through Sept. 22, management said season passes were already up 14% in units and 15% in sales dollars so far this season. That shows the increase in demand for season passes for the wide network of resorts and gives us an idea of just how early some customers are buying passes.

Pass sales are also critical to management's guidance, which was for $778 million to $818 million in EBITDA in fiscal 2020, up from $706.7 million in fiscal 2019. At the midpoint, EBITDA is expected to increase by 13%, a striking improvement driven by the rise in season pass sales.

Power in the network

Vail Resorts' season pass sales are an indication of the strength of its network of properties. The Epic Pass includes not only Vail's popular resorts in the West but also those in regional markets, including Vermont, New Hampshire, Pennsylvania, Minnesota, Missouri, and other states. These areas don't have the drawing power of places like Colorado or Lake Tahoe, but they can get locals to buy an Epic Pass and potentially venture out west to larger resorts in the network as well.

So, early pass sales and early snowfall drive the business from across the country. Snow in Minnesota can mean higher sales late in the season for pass holders in Whistler. The importance of early snowfall for Vail Resorts can't be overstated.

Vail's stock isn't cheap, with an enterprise value to EBITDA ratio of 16, but if EBITDA continues to grow in double-digits, the stock could be a great deal for long-term investors. Sometimes it's worth paying up for quality, and in the case of Vail Resorts, the quality is hard to overlook.

There's a strong competitive moat around the business, pricing power from its large network of resorts, and growing demand for unique vacation experiences. That'll keep driving the stock higher, especially if this year's ski season has better weather than in years past.